Johnson, the former executive director of the Indiana Prosecuting Attorneys Council, passed away unexpectedly March 2. Johnson was with the organization for nearly 40 years before retiring in 2011. 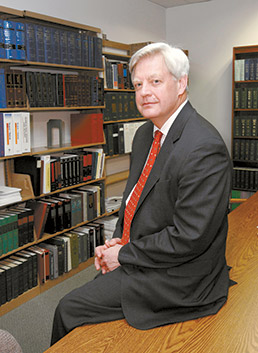 Johnson was admitted to practice in 1973 after graduating from Indiana University Maurer School of Law and began his tenure at IPAC in August of that year. He joined the organization before it was a state-funded agency, which occurred in 1974. He started as a research director before becoming executive director in 1997.

Before attending law school, Johnson received a bachelor’s degree in zoology in 1970 from Michigan State University.

As leader of IPAC, Johnson served as a representative of prosecutors statewide. David Powell, who took over as executive director after Johnson’s retirement, said Johnson’s death was sudden and unexpected.

Johnson served on several legislative committees, educated and mentored prosecutors, and helped rewrite the Indiana penal code. One of his most significant achievements was to help implement a statewide computer system linking state and local offices in the criminal justice system.

Johnson remained on contract as a consultant with IPAC, working on sentencing reform issues. He was among about 20 people in a legislative committee meeting Feb. 27 on the topic.

Johnson was held in extremely high regard by the state’s prosecutors, who saw him as the top criminal law scholar in Indiana, and it’s like a member of our family has passed, Powell said.

“I had one prosecutor say to me it was like Superman died,” Powell said.

In 2011, Gov. Mitch Daniels recognized Johnson as a Distinguished Hoosier. He also has been recognized by the Indiana Supreme Court for his years in service and, in 1998, was honored with the Eugene “Shine” Feller Award, given by Indiana’s prosecutors to those with distinguished service in their field.

Murphy, an Indianapolis attorney who left the practice of law to become a priest, died Feb. 28 after a long battle with Parkinson’s disease. He was 82.

“He was a dear, dear friend,” said Nancy Gargula, U.S. Trustee for Region 10 and Region 13. “He embraced everyone of all faiths and he nurtured everyone to make the most of every day and give back.” 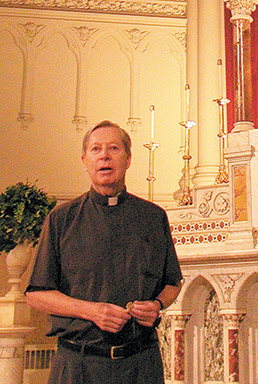 Murphy graduated from the University of Notre Dame in 1954 and the Indiana University Robert H. McKinney School of Law in 1961. He practiced law for 19 years at Hilgedag Johnson Secrest and Murphy in Indianapolis.

He entered politics, serving one term in the Indiana House of Representatives in 1965-1966 and running in the Democratic primary for Indiana Attorney in 1968.

During a pilgrimage to the Holy Land, Murphy said he received the call from God and turned from practicing law to being a priest.

Murphy was studying for the priesthood when Gargula began practicing as a young lawyer. They met at the Notre Dame Club of Indianapolis, where Murphy served as chaplain for several years, and developed a friendship over their common love for music.

He was an accomplished pianist and organist who played regularly at St. John the Evangelist Catholic Church in Indianapolis and once for Pope John Paul II at St. Peter’s Basilica in Rome.

Murphy persuaded Gargula to cantor for the Sunday evening Mass at his parish, St. Joan of Arc. Prior to the service, the two would often sit in the small outdoor garden and talk. Gargula remembered Murphy being especially supportive during a time when her daughter was having difficulties.

Ordained in 1985, Murphy served at St. Lawrence and Christ the King parishes as well as at St. Joan of Arc and St. John the Evangelist. His work as the archdiocesan representative in the Ecumenical and Interfaith areas made him known well beyond the legal and Catholic communities.

“Father Tom and I loved Notre Dame, manhattans and a good meal,” Certo said. “Those three topics gave us ample excuses to get together.”

Certo decided to study the law and remembered one time as an attorney, he was asked by a friend to handle a divorce. Deeply torn by the request that went against his Catholic beliefs, Certo asked Murphy for advice. Murphy said that Certo had to help his friend.

“That was terrific practical and pastoral advice,” Certo said.

Even after he became a priest, Murphy maintained his ties to the law. He was a member of the Indianapolis and Indiana State Bar associations and always attended the annual Red Mass. Members of the St. Thomas More Society recognized Murphy with the Man for All Seasons award, the highest honor the society can give recognizing character, courage and conviction.

Gargula said Murphy had a gift for instantly connecting with everyone he met and making friends easily.

Murphy’s ability to cultivate friendships impressed Patrick Olmstead, Greenwood attorney and president of the St. Thomas More Society of Indianapolis. Olmstead said whenever he spoke with Murphy, the priest would make him feel like the most important person in the room.

As his disease progressed, Murphy lost his ability to play the piano, became confined to a wheelchair, and struggled to speak. Olmstead remembered that through the hardships, Murphy was never bitter nor did he ever complain. He kept his dignity, remained humble and truly enjoyed being around other people.

“He was a real special guy,” Olmstead said.

Murphy is survived by his brother, Robert O. Murphy Sr. (Eileen) of Granger, Ind; and 18 nieces and nephews.•