Kevin Murray’s practice fittingly is government service. He’s served Indiana government in numerous capacities for nearly 40 years, including multiple Democratic governors and as counsel to Democratic caucuses of the Indiana House and Senate, and as Senate parliamentarian. He’s also been a tireless advocate for civility and a proud champion of Irish-American causes. 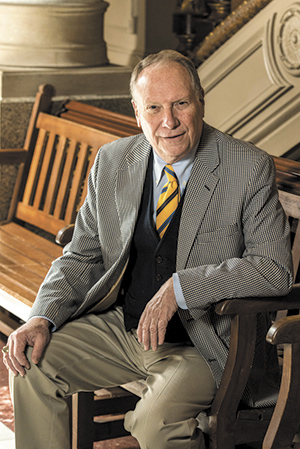 Farming — Garst Farms, Hancock County, the summer of 1973. I learned the concept of being a “professional” there. And I learned that if you pursue your passion, you never have to work.

Age 14. I loved history and lawyers were agents of change for the common good. Thomas Jefferson, John Adams and Abe Lincoln were my heroes.

I served as a Senate intern to Sen. Robert J. Fair, the last Democratic President Pro Tempore of the Indiana Senate (1977-78). Sen. Fair and his outstanding legal counsel, Jack Ross, both taught me how to think, act, and even look like a lawyer.

I am my late Father’s son. Like Indianapolis Fire Department Capt. Kelly Murray, I enjoy the opportunity to help people.

You recently took obtained a master’s degree in historic preservation. What led to that study?

I simply love history and the built environment. Structures say so much about where we have been and where we are going. Preservation enhances our collective memory about what is truly important.

Spending time with Kasey Kendrick, visiting with the McGinleys at the Golden Ace Inn, and occasionally staying at my wee cottage in County Donegal, Ireland.

To paraphrase World War II hero Father Thomas Scecina: Do what is expected of you, then do more —always and in every endeavor.

You’re a strong advocate for civility in the profession. Why is that important to you?

Lawyers are the adhesive that keeps our diverse society together. Civility helps make that adhesion more flexible and forgiving. Together, we are a better people.

My previous business ventures include part ownerships in a liquor store and a minor league professional baseball team.

Helping end the 35-year litigation over the unconstitutional conditions of the Marion County Jail, and thereafter, helping the Sheriff’s Office reach the top 1 percent in the nation. It was an arduous transformation that took nearly a decade to complete. My clients, former Sheriff Frank Anderson and Sheriff John Layton, are truly dedicated public servants.

I fear the depersonalization of the law and the legal profession. Lack of civility is easy when you do not really know your opponent. Lawyers should never become mere BattleBots.

In 1979, our firm (Locke Reynolds) still had stenographers. The practice of law then was slow and methodical. Today, we communicate by email and text with such rapidity. Quicker is not necessarily better.•