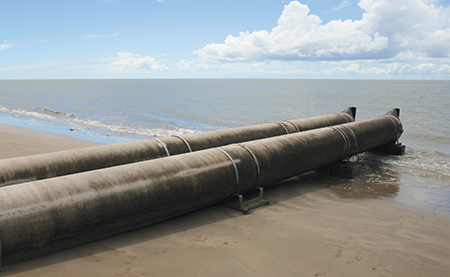 Water pollution has become a regular part of our industrial society, with contaminants finding their way into America’s waters via sources such as pipes, wells and farms. The Clean Water Act regulates different kinds of pollutions in different ways, but a case currently before the United States Supreme Court could blur the line between the kind of pollution that requires a permit and the kind that doesn’t.

At issue in the case of County of Maui v. Hawaii Wildlife Fund, et al., 18-260, is a 9th Circuit Court of Appeals ruling that seemingly expands the Clean Water Act. Under the 9th Circuit’s decision, any pollutant found in navigable water that is “fairly traceable” to a permittable discharge source is subject to permitting requirements, even if the source of the pollutant does not discharge directly into a navigable water.

It’s complicated language, but environmental attorneys say the central question in Maui can be summed up simply: How far does a pollutant discharge source have to be from a navigable water, such as a river or ocean, to fall under the Clean Water Act’s permit requirement?

This question arises out of a Maui wellfield, which has traditionally not been regulated by a National Pollutant Discharge Elimination System, or NPDES, permit. But if SCOTUS were to accept the 9th Circuit’s view of the Clean Water Act’s permitting requirements, attorneys say polluters across the country, including in Indiana, could find themselves required to obtain a permit to continue their operations.

“The reality of the environment makes it difficult to cover all situations and resolve all kinds of disputes with clear categorical definitions,” said Robert Fischman, an environmental law professor at Indiana University Maurer School of Law.

A key distinction in the Maui case is the difference between point sources and nonpoint sources of pollutants.

The Clean Water Act defines a “point source” as “any discernible, confined and discrete conveyance … from which pollutants are or may be discharged.” That can be a discharge source such as a pipe or a well, said Freedom Smith, a partner in Ice Miller LLP’s environmental group. Under the Clean Water Act, polluters who release contaminants via point sources must first obtain an NPDES permit.

Nonpoint sources, on the other hand, are regulated through the U.S. Environmental Protection Agency’s oversight of state management and other non-Clean Water Act programs. Smith gave the example of a farm covered in fertilizer — when it rains, the fertilizer will be washed away and find its way into navigable waters. But because rain is not a “discernible, confined and discrete conveyance,” farmers are not subject to the Clean Water Act’s permit requirement, she said.

But the 9th Circuit disagreed, determining the pollutants were “fairly traceable” to the injection wells, which are a point source. Thus, because the contaminants found their way from a point source to navigable waters, the county must obtain an NPDES permit for its wellfield.

The 4th Circuit Court of Appeals reached a similar decision in Upstate Forever; Savannah Riverkeeper v. Kinder Morgan Energy Partners, L.P., 17-1640. In that case, the circuit court determined “an alleged discharge of pollutants, reaching navigable waters located 1,000 feet or less from the point source by means of groundwater with a direct hydrological connection to such navigable waters, falls within the scope of the CWA.”

But the circuit courts are split on the reach of the Clean Water Act, with Smith noting that in the 1994 case of Vill. Of Oconomowoc Lake v. Dayton Hudson Corp., 24 F.3d 962, the 7th Circuit determined the Clean Water Act doesn’t assert authority over groundwater. Likewise, Larry Kane, a partner at Bingham Greenebaum Doll LLP, said in 2018 there was a 3-2 split among the circuits in five cases dealing with this issue.

On one side of the issue were the 9th and 4th circuits, while on the other side were two cases out of the 6th Circuit and one out of the 1st Circuit. The crux of the 1st and 6th circuits’ decision, Kane said, was that a “direct hydrological connection” between groundwater and navigable waters was not a sufficient nexus to trigger a NPDES permit requirement.

In order to resolve the circuit split, the Supreme Court in Maui must decide which version of the “conduit theory” is appropriate under the Clean Water Act. The conduit theory stretches between two poles, Fischman said: a narrow view that requires direct discharge into navigable waters to trigger the permit requirement, and a broad view that requires permits for any pollution conveyed from a point source to navigable waters through the hydrologic cycle, regardless of the distance between the point source and the navigable waters.

Several variations of the conduit theory lie in the middle of the spectrum, Fischman said, and those variations are what give rise to questions like that presented in Maui. The various theories consider factors such as the distance between the point source and the navigable waters, and the time it takes a pollutant to travel from a point source to a navigable water.

The 9th Circuit’s “fairly traceable” version of the conduit theory is not a significant departure from how the EPA has previously interpreted the Clean Water Act, said Indra Frank, environmental health and water policy director for the Hoosier Environmental Council. She supports the 9th and 4th circuits’ interpretation of the act, believing that ruling otherwise would be akin to saying, “It’s OK to pump contaminants into groundwater even if the groundwater carries the contaminants into a local river, lake or stream.”

But noting the more conservative composition of the Supreme Court, Kane said it’s possible the high court might reject the 9th Circuit’s “fairly traceable” test in favor of a conduit theory on the narrower end of the spectrum, an outcome the petitioners in Maui are advocating for.

If SCOTUS were to adopt the 9th Circuit’s holding, Smith said polluters and regulators — including the Indiana Department of Environmental Management — would have to incur the cost of undergoing additional chemical testing and obtaining the appropriate permits. And specifically in Indiana, the attorneys said the Hoosier State’s coal ash ponds could fall under Clean Water Act regulation.

Currently, coal ash ponds are not subject to NPDES permitting, Frank said, and studies have shown the groundwater near the ponds is contaminated. That groundwater, Frank said, often leads into Indiana’s major rivers and even Lake Michigan. But if SCOTUS upholds the 9th Circuit’s ruling, those ponds could fall under the Clean Water Act, a change Frank said would not be a bad thing.

Though Kane did not opine on whether stricter regulation of coal ash ponds would be environmentally beneficial to the Hoosier State, he noted that, in general, expanding the scope of NPDES permitting would impose a new burden on polluters as they work to come into compliance with their new federal regulations.

“It could complicate the process,” he said.•