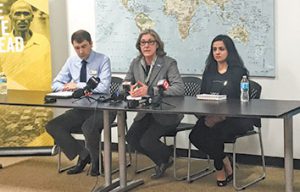 The American Civil Liberties Union of Indiana is suing the Hoosier state for disability discrimination, the most recent piece of litigation in a lawsuit stemming from a donated piece of land in Lawrenceburg.

Describing the Trump administration’s second executive order on refugees and immigrants as unconstitutional and heartless, the leader of the ACLU of Indiana has vowed to fight.

ACLU, others speak out against Trump’s repeal of transgender bathroom directives

The American Civil Liberties Union of Indiana and other civil rights advocacy groups are speaking out against the Trump administration’s decision to rescind federal guidelines protecting transgender students in school restrooms, calling the move dangerous and irresponsible.

A deaf litigant who was denied a sign language interpreter for court-ordered mediation in his child-custody case has the support of the U.S. Department of Justice and the American Civil Liberties Union of Indiana in his federal disability-discrimination lawsuit against Marion Circuit Court.

ACLU is seeing a Trump-era surge in members and donations

The nearly century-old American Civil Liberties Union says it is suddenly awash in donations and new members as it does battle with President Donald Trump over the extent of his constitutional authority, with nearly $80 million in online contributions alone pouring in since the election.

An Indiana law prohibiting voters from taking photos of their ballots for personal use is an unconstitutional violation of First Amendment rights, a district court judge has decided.

A Clarksville resident is suing the southern Indiana town for entering her yard without her permission or warrant, an action she says violates her Fourth Amendment rights.

A central Indiana town has removed a cross from its Christmas decorations after the American Civil Liberties Union of Indiana said it violated the First Amendment.

The American Civil Liberties Union is suing a central Indiana town over the display of a cross as part of its Christmas decorations.

A man represented by the American Civil Liberties Union of Indiana has filed a lawsuit challenging the Franklin Township School Board’s alleged policy of opening meetings with exclusively Christian prayers.

Planned Parenthood of Indiana and Kentucky has asked a federal judge to throw out abortion restrictions signed this year by Gov. Mike Pence that were blocked from taking effect July 1.

After preventing local residents from commenting on their official Facebook pages, the city of Elkhart and the Martinsville Police Department are being sued for alleged violations of citizens’ First Amendment rights.

The city of East Chicago and its housing authority have been ordered to stop what the ACLU of Indiana is calling “warrantless, nonconsensual entry” into residents’ homes after a district court ruled that doing so violated Fourth Amendment protections against unlawful search and seizure.

Exodus: Syrian refugees ‘not who Pence and others claim’

Fresh off a defeat of Gov. Mike Pence’s effort to bar Syrian war victims from settling in Indiana, the leader of a refugee resettlement program said the agency’s work assisting them will continue.

ACLU of Indiana to pass out pocket US Constitutions 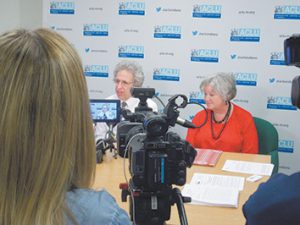 After a federal judge on June 30 blocked a restrictive new Indiana abortion law from taking effect, Planned Parenthood of Indiana and Kentucky and the American Civil Liberties Union of Indiana vowed to take aim at other recent enactments that might infringe on the constitutional right. A week later, a fresh federal lawsuit targeted another Indiana abortion law passed this year.

A new Indiana law requiring women to have an ultrasound 18 hours before an abortion is being challenged in court by Planned Parenthood of Indiana and Kentucky.