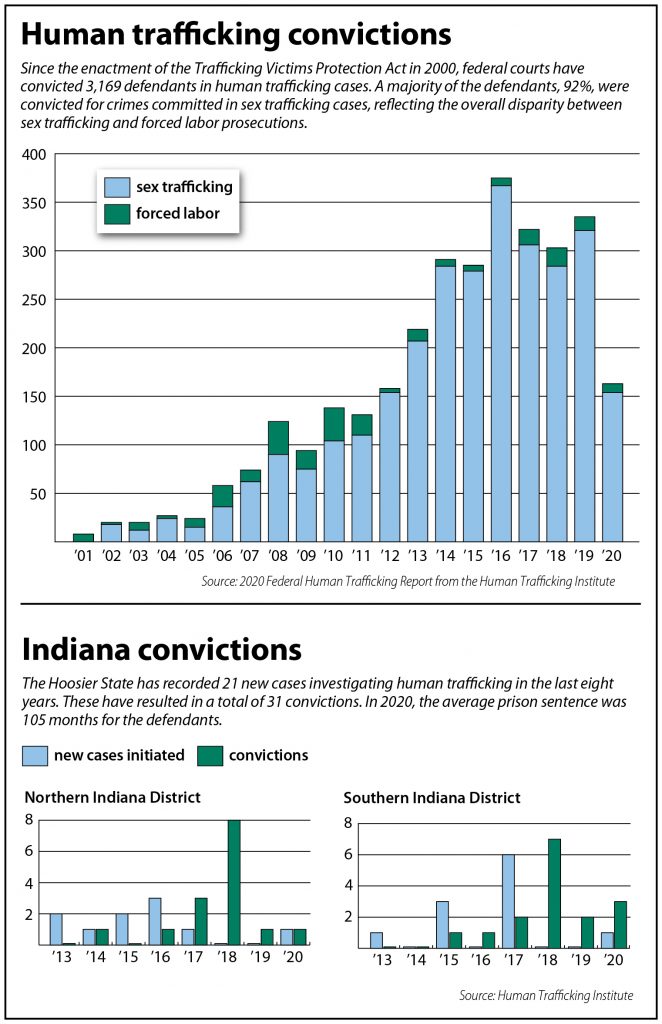 In the 20 years since the Trafficking Victims Protection Act was enacted by Congress, prosecutions and convictions of individuals charged with human trafficking have increased.

The numbers, however, are nowhere near what is believed to be the scope of the problem.

The federal statue has brought 2,093 federal prosecutions resulting in the convictions of 3,169 defendants during the past two decades, according to a report recently released from the Human Trafficking Institute. However, the specialized expertise needed to build these complex cases along with the struggles of the victims and the level of cooperation required between different agencies make prosecuting individuals for sex or forced labor trafficking especially difficult.

The goal of the report, “2020 Federal Human Trafficking Report,” is to highlight trends in how enforcement of the TVPA has changed, Roberson continued. Those trends show an explosion of prosecutions and convictions.

Since the law took effect, convictions have risen from eight in 2001 to a high of 375 in 2016 while prosecutions have grown from four in 2000 to a high of 221 in 2015. In Indiana, the numbers exhibit a much shallower bend upward, but since 2013 the Indiana Northern and Southern districts have combined to record 31 convictions.

The TVPA has undergone multiple reauthorizations since it was enacted and will likely be reauthorized again in 2022. Roberson said she hopes the new iteration of the federal law not only provides more resources for law enforcement and federal prosecutors so they can establish specialized units for investigating trafficking crimes but also includes tools to hold corporations accountable for any of their actions that contribute to human trafficking.

In addition, she said she wants to ensure the survivors of human trafficking are not neglected.

“I can’t effectively prosecute a case if the victims in my case aren’t adequately supported during the process,” Roberson said. “We want to make sure we have the resources for basic support, whether that’s shelter, mental health or a number of different needs that they may have.”

Although separated by 12 years, the inspiration for the TVPA is traced back to the fallout from the U.S. Supreme Court’s decision in United States v. Kozminski, 487 U.S. 931.

The case began when two men with mental incapacities and in poor health were discovered on a Michigan farm living and working in squalid conditions. The family that owned the farm was convicted under federal law with knowingly holding the men in involuntary servitude. However, the 6th Circuit Court of Appeals reversed, finding the term “involuntary servitude” did not include psychological coercion. The Supreme Court affirmed.

Roberson said the TVPA recognized the many different types of coercion that a trafficker can use to compel a victim into either forced labor or commercial sex. In particular, she noted the “invisible types of coercion” that can make a trafficking victim hard to identify because they don’t always show signs of force.

“The coercion can also be fraud, it can also be psychological and reputational harm, financial harm,” Roberson said. “In fact, sometimes those types of harm are more compelling than physical harm, but they’re really hard to detect.”

Led by former Indiana Attorney General Greg Zoeller, the Hoosier State enhanced its human trafficking law in the weeks before the 2012 Super Bowl arrived in Indianapolis. The new provisions sought to reduce human trafficking by focusing on the demand that fuels trafficking, particularly of sex victims.

House Enrolled Act 4, signed into law by then-Gov. Mitch Daniels on Jan. 30, 2012, expanded the definition of human trafficking to include anyone who uses force, threats or fraud to recruit, harbor or transport another person in order to participate in sexual conduct. It also created felony-level offenses for sexual trafficking of a minor and for paying or attempting to pay for another person who is being trafficked.

Zoeller explained the goal of penalizing individuals who were creating the demand by paying for commercial sex was “to raise the public’s understanding that this is the purchasing of another human being, which puts it in a little different light. When you say, ‘Do you think it’s OK to purchase another human?’ nobody’s going to say ‘yes.’”

Roberson explained the irony that trafficked labor victims can be harder to spot because they are often in plain sight.

“You have a coerced worker right next to a worker who’s not coerced in a regulated industry,” she said, “and it’s so difficult for law enforcement and other regulatory bodies to detect that.”

Data from the National Human Trafficking Hotline show the Hoosier State saw 157 human trafficking cases in 2019, a 19% increase from 2018.

However, the “2020 Indiana State Report on Human Trafficking” echoed Roberson in noting the numbers do not indicate the extent of the criminal activity. For example, the hotline received 40 reports of trafficking of minors in Indiana in 2019, while Ascent 121, an Indiana agency that specializes in supporting survivors of sex trafficking, provided services to 117 minors.

Since the 2012 legislation, the General Assembly has further strengthened Indiana’s human trafficking law as well as passed other bills that have bolstered help and support for trafficking survivors.

A 2017 law, in particular, enabled survivors to vacate any convictions they may have gotten during the time they were being coerced or under the control of another person. The 2020 Indiana human trafficking report described that statute as being of “critical importance” to survivors by helping them overcome the barriers created by the conviction to employment, housing and education.

Yet working with and helping survivors of sex trafficking can be a challenge, because many times they will not see themselves as victims.

Miranda Nehrig, staff attorney with Indiana Legal Services’ Human Trafficking Project, provides civil legal representation to sex trafficking survivors statewide and helps connect them with social services so they can overcome the obstacles that are directly related to their trafficking experience, including divorce or custody issues and consumer debt.

In addition, she will work to get the survivors restitution, which the TVPA allows. The amount will not be comparable to what is owed, Nehrig said, but the money can go toward services like therapy to help make the survivor whole from the experience.

All of this comprises the support that Nehrig said is critical to keeping survivors stable and making them more willing to participate in the prosecutions of their traffickers. Helping put their abusers behind bars can be very difficult for survivors because of the tangled relationship that can result from the coercion.

“The person who exploited the trafficking victim and is the most abusive person that the victim knows is also the person the victim trusts the most,” Nehrig said.

Nehrig works alongside a social worker to serve all the needs the survivors have, but most importantly, the ILS team lets the survivors have control. The survivor will be allowed to take a step back as the prosecution case is being built and will be able to say what they want as well as whether they will participate in the services offered.

“We endeavor to always be survivor-centered and listen to what survivors need,” Nehrig said, “and respect their choices even when those choices are the direct opposite of what I think is the better option.”•