In fact, it was an engineering degree that first took him to the company where he’s moved up the ranks for more than
a decade, working in the trenches and traveling the globe. He eventually set his sights on law school and became the company’s
in-house counsel responsible for the day-to-day legal tasks.

It’s this post that’s allowed him to help transform the company’s legal department, assist in its post-bankruptcy
emergence, and set Remy International on a course to evolve into new hybrid technology as the entire auto industry changes.

All this by the time he reached age 30.

“Being the only in-house counsel is a challenge, and there’s a lot of days when it’s like drinking from
a fire hose,” the now 32-year-old said. “But you get to cover a lot of broad issues every day, and it’s
always something new and exciting. I like that.” 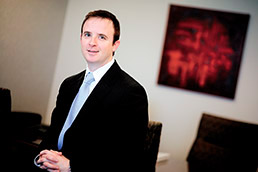 Jeremiah J. Shives started at Remy International as an engineer. After attending law school at night, he
became the sole in-house counsel for the company. (IL Photo/ Perry Reichanadter)

Shives started working at Remy’s plant in Anderson right after getting his undergraduate degree from Rose-Hulman Institute
of Technology in 1999. While he started in engineering that summer, Shives took on various roles through the years. Most of
these roles were technological in nature but also involved supply chain and product management, business development, and
then a global product launch that meant traveling to places including Europe, Asia, and Mexico.

But his legal aspirations were already beginning to emerge. He enrolled at Indiana University School of Law – Indianapolis
in 2001, attending classes at night while doing his regular full-time job.

Earning his law degree in 2005 and passing the bar exam in 2006, Shives moved into the deputy general counsel spot for his
company. He’s the only full-time in-house counsel for Remy, though another attorney works part-time in that capacity,
and the company utilizes many outside counsel for litigation matters. Shives still travels about three times a year, but mostly
he stays at headquarters and handles the legal issues globally for the company that’s been around for more than a century.
That historical aspect of the company makes his role even more interesting personally, Shives said.

Founded in 1896 as a home wiring business in Anderson, the company took on the names of Delco Remy and Remy Electric Co.
during that first century and got into the cranking motors, generators, and distribution areas. General Motors purchased Remy
and a competitor in 1918, and the company was GM’s largest division for many years until it parted ways with the automaker
in 2004 and took its current name of Remy International.

Now, the electrical system manufacturer employs more than 6,000 people, usually has about $1.2 billion in sales each year,
and is the seventh largest privately held company based in Indiana, Shives said. The four main components of the business
are original equipment like generators and starting motors; recycling and manufacturing; European business; and locomotive
components out of Peru, Ind.

Most recently, Shives said the company has started delving more into the high-energy and hybrid market and last summer received
$60.2 million in federal stimulus money to help continue developing hybrid electric motors and controls. The money from the
Department of Energy will help the company establish a standardized platform of those products, such as the patented High
Voltage Hairpin and Integrated Starter Generator Propulsion platforms, some of which have been produced since 2006 and now
power passenger vehicles.

“We have our core business, but we are moving into this high-energy and hybrid aspect more recently,” Shives
said. “These are exciting times, and I get a little of both worlds – the established corporate structure of more
than a century, and also the fun, exciting, unpredictability of a startup tech business.”

The changes he’s seen since 1999 are pretty fascinating, Shives said.

“I’ve been with the company through its most drastic changes in the past 11 years, and that gives you perspective.
We’ve lived through the large manufacturing process being moved offshore, and have seen tough reductions in trying to
stay viable.”

The company went through bankruptcy in 2007, but did so in less than 60 days with a pre-packaged and groundbreaking bankruptcy
package. Remy became a model for the most recent auto industry bankruptcy proceedings, Shives said, and Congress turned to
Remy for advice on how it had gone through that process.

Since bankruptcy, the company has been doing well and has had two solid earning years, he said.

Through those early years and transformative times, he said the company never had a true legal department and one wasn’t
established until new management came on board in 2006.

Company finance director Michelle Patishall said historically Remy used outside counsel, but even when the company employed
in-house lawyers, a disconnect existed between the company’s legal and business leaders.

Shives changed that though, Patishall said. He started with a focus on patent law because of his engineering background,
and immediately hit the ground running. He made a huge impact on the company by attending a significant aftermarket trade
show, using his engineering knowledge to identify the infringers, and then immediately hit them with a defendable cease-and-desist
which set several of these infringers back, she said.

“His versatility means that almost every legal issue is addressed in-house with business leaders,” she said.
“I can’t name the list of items over the last two or three years in which I have heard ‘I have J.J. working
on it’ … the amount of exposure to a variety of legal issues is amazing and somewhat overwhelming. But it’s
a fantastic personal and career growth opportunity he is taking full advantage of.”

In his role as in-house counsel, Shives said he does any number of tasks: advising corporate and executive teams about strategy,
managing all intellectual property portfolios, reviewing national and international contracts on joint ventures with vendors
or suppliers, and handling labor and employment issues and real estate matters. In recent years, he’s been delving more
into government relations, he added. He manages strategy in-house, but any litigation and bankruptcy issues are all given
to outside counsel.

David Irmscher, an attorney with the Fort Wayne office of Baker & Daniels, has been working with Shives for a couple
years as outside counsel for Remy and praised the in-house attorney’s skills. He pointed to a case the two are currently
handling that involves a lot of document work and development of engineering issues. He said that’s just one example
illustrating how Shives’ experience is irreplaceable.

“He’s really effective because he’s an engineer and has been with the company so long,” Irmscher
said. “That background makes him an effective lawyer for them and really allows him to access the internal resources
effectively to advance the case.”

Irmscher described Shives’ background and working his way to this position at such a young age as a pretty remarkable
accomplishment.

Though he’s never experienced life as an attorney outside the corporate counsel spot for Remy, Shives said he couldn’t
be happier working with a company that he has a history with. He has no plans at this point of looking elsewhere.

“I have one client,” he said, “and that’s the client I’ve been able to know from different
perspectives. … That helps me perform at higher level.”•