A large number of the wrongful-conviction cases in recent years have involved DNA evidence that wasn’t available at
the time of a crime. Once that testing technology became possible, those who’d been convicted started turning to the
method to prove the innocence they’d maintained all along. In one Indiana man’s case, the DNA evidence excluded
him, but a lesser caliber category of forensics was introduced as evidence. Now, convicted felon Roosevelt Glenn said that
serology used at his trial was a contributing factor in his being wrongfully convicted and spending the past 16 years behind
bars.

He is now being assisted by the wrongful-conviction clinic at Indiana University School of Law Indianapolis, and the Indiana
Supreme Court is considering whether to accept his post-conviction case on an issue his attorneys and some nationally say
is an important question of law relating to wrongful convictions. 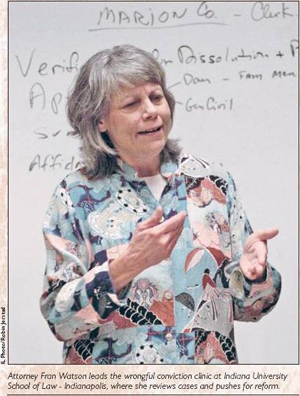 “This case is the ideal vehicle to correct an erroneous determination
and to set forth the appropriate test for granting a new trial under Indiana’s remedial DNA statute,” wrote Indianapolis
attorney Stacy Uliana in an amicus curiae brief submitted by the pro bono Innocence Network, a group of organizations committed
to investigating and advocating on wrongful conviction cases. “Sections 8 and 19 of the Indiana DNA statute affirm a
petitioner’s statutory right to a new trial once he demonstrates a ‘reasonable probability’  not a
certainty  that a jury considering the evidence as it stands today would fail to convict him. Glenn has amply surmounted
that barrier, (and he) seeks the opportunity for a new, fair trial where the remaining evidence against him must stand alone,
not false corroboration by discredited science.”

After a mistrial in 1992 resulting from a hung jury, Glenn was convicted in March 1993 on a Class A felony rape count arising
from a series of Lake County gang rapes and robberies that happened between 1989 and 1990. Five people were allegedly involved
and police ultimately looked at Glenn and some of his co-workers, though the state dismissed charges against some of them.
He received a 36-year prison sentence, which was later upheld on appeal.

At the time of the trial, Glenn was a 27-year-old married father without a criminal history. His initial appeal failed, but
after a decade in prison he filed a claim based on post-conviction DNA evidence allowed by Indiana’s new DNA statute
that went into effect July 1, 2001.

His post-conviction appeal argued that he was entitled to a new trial based on newly discovered material evidence: that a
hair strand the state had used to convict him at trial wasn’t his and that the serology shouldn’t have been used
after post-conviction DNA testing excluded him from being a contributor in the crimes. He also argued his counsel wasn’t
effective because those issues weren’t raised more forcefully at trial. However, Glenn’s post-conviction claims
didn’t result in a reversal, and in its April 2009 unpublished decision the Court of Appeals wrote that the circumstantial
evidence used in the case, considered as a whole, was sufficient and probably wouldn’t lead to a different result on
retrial.
In the pending petition for transfer, attorney and law professor Fran Watson, who leads the law school’s wrongful conviction
clinic, argues that the court has a chance to review this case and set a standard for how these issues are addressed in the
face of growing exonerations and wrongful-conviction findings nationally.

“At their core, the three issues revolve around the State’s
use of invalid science to secure a conviction,” Watson wrote, citing two recent U.S. Supreme Court cases that touched
on science and wrongful convictions. “Both, highlight the fact that the State’s use of invalid science is a systematic
problem from which unfortunately, as this case reflects, Indiana is not immune.”

Watson said the ultimate question in this case is whether DNA trumps serology, and it’s that on which she hopes to
get the Supreme Court to accept transfer.

According to the New York-based Innocence Project, which accepts cases nationally and is affiliated with the Cardozo School
of Law, serology was the only way prior to DNA testing to help identify the source of blood, semen, or other body fluids found
at a crime scene. Forensic analysts were able to use serology to determine what blood type was present in fluids collected
in a rape kit or on a crime victim. Wrongful-conviction cases and exonerations in the past decade show that analysts sometimes
have failed to recognize nuances in the forensics that make it impossible to truly know the blood type of the perpetrator,
or resulting in analysts providing inaccurate statistics for the percentage of the population who share the perpetrator’s
blood type.

“The simple fact is that knowledge increases, and we’re going to find that more and more cases at the post-conviction
relief level that need scrutiny because of this new knowledge,” Watson said. “It’s not a situation where
anyone was falsifying evidence or misleading the court, it’s just what the experts believed was valid at the time. Now,
we know that’s wrong.”

Responding to the Indianapolis law school’s transfer petition, Zachary Stock, Indiana deputy attorney general, contends
the justices should deny transfer because the Court of Appeals applied existing law in its unpublished opinion to determine
that newly discovered evidence probably wouldn’t produce a different result at a jury trial. The response also notes
that the alleged due-process issue is procedurally defaulted and that Glenn hasn’t stated any reason why an ineffective
assistance of counsel claim warrants transfer.

“The forensic science presented in a trial can be wrong, but it does not necessarily follow that the conviction following
that presentation is also wrongful,” the brief states.

Whether Glenn, now 47, gets the ear of Indiana’s justices remains to be seen. The court started considering his request
Aug. 27, but a decision hadn’t been made by deadline for this story.