Kristine M. Bunch has a dream of becoming a lawyer, to be a voice for women who don’t have one.

Before that can happen, though, she has to overcome an obstacle that stands in the way of not only a legal education but her very freedom. She has to prove her innocence and overturn an arson and felony murder conviction for a fatal fire that killed her 3-year-old son which led to her spending the past 13 years in prison. 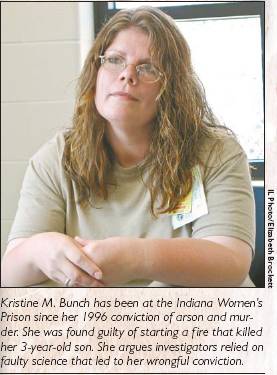 The 35-year-old mother is serving a 60-year felony murder sentence, one she contends is the result of a wrongful conviction caused by faulty science used by fire investigators. An inmate at the Indiana State Women’s Prison on the eastside of Indianapolis, Bunch is offender No. 966069 and has achieved what her attorneys and prison officials describe as remarkable for anyone behind bars: she’s a degree-holding cosmetologist, mini-marathoner, service-dog trainer, and ministry volunteer, not to mention a certified paralegal and the first female inmate to ever take the LSAT.

While she’s proud of her accomplishments inside, those aren’t her main focus. Instead, she’s on a mission to prove she shouldn’t be behind bars in the first place. The odds aren’t in her favor. She’s a convicted felon and is no longer innocent until proven guilty; rather she’s guilty and must regain her innocence. But serving as a beacon before her, Bunch focuses on the fact that wrongful convictions are becoming more common, proven nationally as science evolves and flaws in the legal system become more apparent.

More than 230 people have been exonerated nationally, and Bunch hopes to add her name to that roster with the help of an Indianapolis attorney and Northwestern University School of Law’s Center on Wrongful Convictions. Her post-conviction appeal in Decatur County articulates that the science used to determine the fire’s cause was faulty and that it’s a discredited method proving to be a significant factor in a growing number of wrongful conviction cases nationwide. The appeal represents the first Hoosier case to touch on this issue, and if she proves her innocence she has the potential to be an additional name on Indiana’s exoneration list.

“Kristine is a model prisoner who’s earned her college degree while in prison and is anxious to be released in order to gain custody of her other child and eventually attend law school,” said Illinois attorney and law professor Karen Daniel, who is representing Bunch on behalf of the center. “It’s important that her story be told.”

In the early morning, the then-21-year-old mother awoke to flames and smoke in her mother’s trailer home in Greensburg. Her 3-year-old son, Tony, had been asleep in another bedroom. In published letters recalling her memories, Bunch described running down the hallway through thick smoke to her son’s room, seeing him trapped inside where he stood on the bed and calling for his mom. She tried to throw a blanket on the fire but couldn’t get inside. She ran outside to find help but not before getting mild burns herself.

Six days later, Bunch was arrested and charged with both arson and felony murder. She pleaded not guilty and went through a jury trial in February 1996. Prosecutors initially sought life without parole, but the jury unanimously recommended against that penalty, and the trial court imposed the maximum of 60 years. 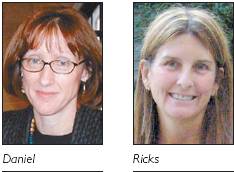 Looking back on the trial experience, Bunch said she was a naïve at the time. She was four months pregnant with her second son – now 13 – and was still grieving the loss of Tony and in a blur during the trial. The jury convicted her on both arson and murder charges, and she initially received 50 years for the arson and 60 years for the murder, though the trial judge merged the two at sentencing.
“I don’t know if my lawyer did a good job or not,” she said about her appointed trial attorney from Greensburg. “He told me that my best interests were at heart, and I trusted that. But I really don’t know what happened to say if that’s true or not. All I know is that I ended up in here.”

In appealing to the Indiana Supreme Court on direct appeal, Bunch said she had virtually no contact with her appointed appellate lawyer at the time. She received the brief in prison once it was filed. The lawyer also sent the June 9, 1998, appellate decision affirming her felony murder conviction and 60-year sentence. The court also remanded with direction to vacate the arson conviction because of double jeopardy – a person can’t be sentenced for both a felony murder and the underlying felony.

“After the appeal came back, I thought nothing else could be done,” she said. “That’s what I thought was the end.”

After years in prison, Bunch eventually learned about post-conviction relief and that reinvigorated her hope that more could be done. She contacted an author who’d written about wrongful convictions and female inmates before, and that resulted in Bunch sharing her story for the 2001 book, “Letters from Prison: Voices of Women Murderers.”

Researching post-conviction relief in the prison’s law library, Bunch learned she’d need to find her own attorney and fellow inmates connected her with Indianapolis attorney Hilary Bowe Ricks. She had to work three prison jobs to pay off the payment plan they reached, and now Ricks is working the case pro bono.

Through a prison pen pal, Bunch learned about the wrongful conviction clinic at Northwestern’s law school and faxed her trial transcripts to them to review. That was almost a year ago, and her attorneys filed a petition for PCR in Decatur Circuit Court in November. The non-profit Innocence Project based in New York has also gotten involved in the case. A post-conviction hearing is scheduled for Oct. 20, and at that time her attorneys expect for the judge to consider the evidence and ultimately take the matter under advisement to determine whether any relief is warranted.

Daniel said that Northwestern’s clinic has seen many arson cases in recent years where junk science has played a role, but to date this case is the first litigation initiated on the issue.

Ricks said she also hasn’t had any cases where this has come up, but she expects it to become more frequent.

“This is a very specialized knowledge, and there are many, many cases where they’ve found out now that, through better science, the previous science determining arson is faulty,” Ricks said. “One of the biggest things that struck me when reading the transcripts is that you just don’t jump to an arson conclusion within an hour … . You have to rule out everything else and then come to that decision. That wasn’t done here.”

In Bunch’s case, investigators relied on several factors such as blaze temperature and development speed, irregular burn patterns, low burning, and holes in the floor to determine the fire was likely an arson started in Tony’s bedroom. But advances now show many of those indicators are myths, her attorneys say.

Earlier this year, the National Academy of Sciences issued a congressionally mandated report finding serious deficiencies in the nation’s forensic science system and called for major reforms. Part of that report says fire investigators have in many cases routinely relied on indicators that were common at the time but have since become outdated and discredited by scientific research. Bottom line: Fires once thought to be arsons are now being proven to be the result of some other factor.

The question that must be considered in Bunch’s case and any others raising this issue is whether this change in forensic science standards would have made a difference at trial. Bunch and her attorneys all believe the answer is yes.

“Only recently, I started believing that there’s a chance I could get out before I’m 50-something years old,” she said. “There’s a reason for hope.”

Until that possible PCR arrives or her sentence runs out, Bunch lives in a complex with about 200 other women inmates, living in a military-barracks style room where each side has 22 women. Her Department of Correction number is as much a part of her identity as her given name.

She’s earned her general educational development diploma through tutoring, and earned an associate’s degree in cosmetology through Ball State University. Bunch helps boost the moods of her fellow inmates with hair or nail services. She also participates in a ministry through the prison, trains a 20-month-old Labradoodle named Monon to be a service dog for the disabled, and practices for a 13.1-mile prison-track mini-marathon in late September. Bunch also took an eight-month Blackstone course to get certified as a paralegal. In June she took the LSAT and became the first woman in the women’s prison to have ever done so.

“A lot of women in here don’t have a voice and can’t afford an attorney,” she said. “That’s the person I want to be: someone who can give them a voice.”