Leading to its 100th anniversary in less than a year, the Evansville Bar Association has been making preparations to celebrate
the anticipated completion of The Randall T. Shepard Courtroom, named for the current chief justice of the Indiana Supreme
Court and an Evansville native.

The courtroom will be the site of a hard hat reception in October and will be renovated in time for the association’s
anniversary celebration at the EBA’s Law Day event in April 2011, EBA executive director Susan Vollmer told Indiana
Lawyer. 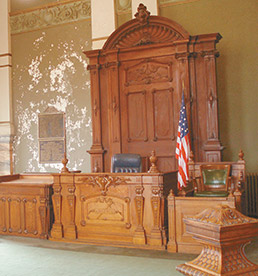 Chief Justice Shepard was also instrumental in encouraging EBA members to support the renovations, Vollmer said. She said
she has already had some conflicts when trying to schedule the EBA receptions due to other organizations and individuals who
have already booked the courthouse, which is partially renovated already.

The courtroom, which originally housed the Vanderburgh Superior Court, will likely be used for some court hearings, as well
as teen court, memorial events, and other special events for the Evansville legal community.

Another way the organization will celebrate the anniversary is an oral history project. Retired former executive director
Susan Helfrich continues to work on interviews that will ultimately be available to the public. The history of the Evansville
legal community – and how various trials and legal events have shaped the community at large – once completed
will also be included in a display at the historic courthouse and online for classrooms to use.

While most of the history project is intended to be online, according to EBA president-elect Todd Glass, there will be panels
on the wall and a table with information and ultimately computer terminals in the hallway outside the courtroom for visitors
to learn about the legal history of southwest Indiana.

A local high school has also been recruited to work on a video project for the EBA. The bar association gave video editing
and recording equipment to the school to use for their project, and the school will keep the equipment for any future projects
they have.

Chief Justice Shepard will be recognized in another way this fall through a new program at Harrison High School, part of
the Evansville Vanderburgh School Corporation. The Randall T. Shepard Academy for Law and Social Justice will start at the
beginning of the 2010-11 school year.•