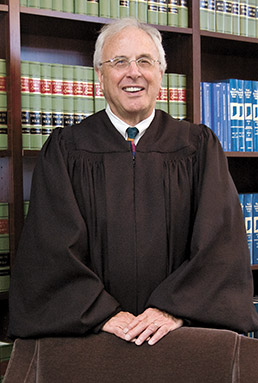 When comparing his past two jobs, Judge Thomas G. Fisher admits that he finds stories from his prosecutor days more interesting
than those in the past quarter century when he’s presided over the state’s appellate tax court.

Anyone listening at a cocktail might agree, the veteran judge said with a laugh.

But that story-telling excitement – or lack of one as he sees it – can’t diminish the fact that Judge Fisher
has made history on the bench. He is the first and only person to serve on the appellate tax court since it’s creation
in 1986, and he’s been a pivotal force in reshaping Indiana’s tax laws.

But after 24 years, he’s decided it’s time to hang up his robe. Judge Fisher announced Aug. 12 that he’ll
retire at the end of the year, meaning the state will have to find a new appellate judge to preside over that unique court
that is the only one in the state to have both a trial and appellate function.

Though Judge Fisher won retention in 2008, the 70-year-old judge is approaching the mandatory retirement age of 75 and he
said this was the best time to move on.

“There was not any one thing,” he said. “It’s just an intangible feeling that makes you decide to
go on to other things in life. I’m not so vain to think litigants can’t do better than me in getting a freshness
for the court with fresh ideas and thinking.”

Judge Fisher was appointed July 1, 1986, by then-Gov. Robert Orr. Prior to that time, tax cases were heard at the Circuit
or Superior level in either the county where the property was located or where a resident lived.

Before taking the bench, the Michigan native – who graduated in 1965 from what is now Indiana University Maurer School
of Law – Bloomington – worked in private practice for a couple years with offices in Rensselaer and Remington.
Gov. Roger Branigin in 1967 appointed him to be Jasper County prosecutor, a position that Fisher would hold for nearly two
decades.

He’d chaired the Indiana Prosecuting Attorneys Council and received the Eugene “Shine” Feller award. Aside
from prosecutor, Fisher also served as attorney for the towns of Demotte and Remington and counsel for the Jasper County Economic
Development Commission.

But when lawmakers decided to establish a state-level tax court, they looked to the longtime prosecutor to be the sole judge.

Greenwood attorney Bill Barrett at law firm Williams Barrett & Wilkowski said the state had a “patchwork”
of taxation caselaw before that, and leaders wanted to provide one cohesive voice and path for tax cases to take.

“He’s taken very seriously that obligation as the sole pathfinder, laying out caselaw to serve as a guide for
counsel and taxpayers in every area of tax law,” said Barrett, who clerked for Judge Fisher in the earl ’90s.
“As the first judge, not only did he have to plow new ground, but there also wasn’t anyone in the wings when he
was going through that process because we didn’t have someone who had a career directly and solely on that path.”

During the judge’s Tax Court tenure, the Indiana Supreme Court reported he’s decided about 800 cases that involve
tax issues and whether the government correctly taxed a person or business. Most of the appeals involve decisions by the Indiana
Board of Tax Review. The tax court also maintains a small-claims docket for processing refund claims less than $5,000 from
the state Department of Revenue and Board of Tax Commissioner-assessed values less than $15,000 for any year. The court also
has the ability to hear cases in Allen, Jefferson, Lake, St. Joseph, Vanderburgh, and Vigo counties.

Overall, the judge doesn’t prefer to place any more significance to one case than another. But he does recognize one
property case that clearly stands out through the years: State Board of Tax Commissioners v. Town of St.
John, 702 N.E.2d 1034 (Ind. 1998), in which the Indiana Supreme Court affirmed Judge Fisher’s ruling from two
years earlier in finding the state’s property tax assessment system unconstitutional and resulted in the fair-market
value system.

“That’s the biggest case I’ve had and would probably be the signature case of my career,” he said.
“The sheer magnitude of it is still being measured in the past several years, as assessors have been trying to comply
with regulations put into place in response to St. John.”

However, Judge Fisher is proud of every case he’s handled through the years, like a first impression issue a couple
years ago when he ruled a bank didn’t need to have a physical presence in the state to be subject to the Indiana Financial
Institutions Tax. That’s a national issue he hopes the U.S. Supreme Court will consider at some point.

“I’ve tried to give citizens a good, consistent body of caselaw,” he said. “That’s important,
to have that kind of body of law that offers guidance to both lawyers and the public about what our state tax laws say.”

When he started, Judge Fisher said property-tax cases outweighed other state court tax issues by 2-1, but the judge said
that trend has completely reversed. He said one significant change has been that no evidence is debated on property-tax cases
now since an administrative record-producing statute went into effect about a decade ago.

“Facts are rarely in dispute before me because the books say what they say,” he said. “The question is
how the law applies to those numbers and data.”

Former Tax Court Clerk Martha Wentworth, who clerked in the court for two years and now serves as tax director of the Indiana-based
multi-state group of Deloitte Tax, said that Judge Fisher has a national reputation for building a unified body of common
taxation law in Indiana. He has upheld the balance of fairness between state tax administration and taxpayer rights, she said.

Indianapolis attorney Mark Richards in Ice Miller’s tax group agreed, saying that his practice beginning in 1985 has
coincided with the tax court creation one year later and most of his practice has been before Judge Fisher.

“I wish him the best in his retirement, and he’s earned it, but this is a loss for the state of Indiana,”
Richards said. “He’s always been a very fair and no-nonsense judge.”

The judge’s son, Indiana Solicitor General Thomas M. Fisher, said retirement is a big deal for his father, who’s
taken so much pride in what he has done. Aside from being a significant influence in establishing state taxation caselaw,
Judge Fisher has also had a monumental impact on the younger Fisher’s life in inspiring him to follow in those legal
footsteps.

“Every kid thinks their dad is Superman, and I’m no exception,” he said. “Dad has been a pillar in
every community he’s lived, and that was so inspirational as a kid, to see that impact on the community where we lived
and then on the state as a whole. His professional, deep commitment to the rule of law was been clear to me as a kid, and
that’s impacted my views of the world. I think this was a difficult decision and he was hesitant to move on, but that’s
a period in life that comes for all of us.”

Though Judge Fisher said he hopes to stay on as a senior judge as needed, he doesn’t have any specific plans for his
retirement. One possibility is increasing his involvement in civic activities, such as the Rotary Club that he joined in 1970
and most recently served as district governor for the 45 central Indiana clubs.

The Indiana Judicial Nominating Commission will interview applicants in the coming months for the vacancy, with first interviews
Sept. 27 and semi-finalist interviews Oct. 27. An application deadline had not been set by IL deadline, but based
on past appellate vacancy application deadlines the applications will likely be due by mid-September. The seven-member commission
will choose three names to submit to Gov. Mitch Daniels, who makes the final choice.•