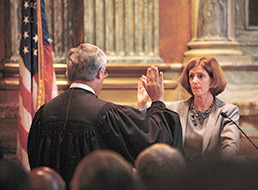 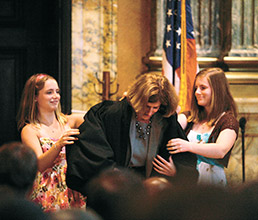 Following her confirmation for an Article III judgeship earlier this year, U.S. District Judge Jane Magnus-Stinson
in the Southern District of Indiana takes her official oath from Chief Judge Richard Young, top. She then slips into her judicial
robe with the help of her daughters. That followed an afternoon ceremony during which her colleagues welcomed her as the third
woman on the District Court’s bench and the fourth female federal judge for the state. The events were in Indianapolis
Aug. 6. (IBJ Photo/ Perry Reichanadter)