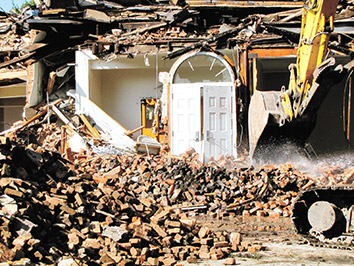 Looking at old photographs of a building on a northwestern Indiana campus built in the late 1800s and comparing it with a view of the same building from the school’s website, one would be hard pressed to find any major differences, at least on the outside.

But the inside of Heritage Hall, named for a music professor and one of the oldest buildings on the campus of Valparaiso University, has been redesigned as the law school’s Lawyering Skills Center and will soon welcome the Valparaiso University School of Law Clinical Program back to its old location.

By the end of September, all construction will be done except for a few minor details. The furniture is due in early October, which is when technology will be installed. By mid-October, the law clinic will have moved back into Heritage Hall and out of the modular offices – a.k.a. doublewide mobile homes – where they’ve been for the last year.

Heritage Hall, built in 1875, has had a number of purposes, including a boarding house, a library, a building for music classes, and other uses over the years.

The building is adjacent to the law school’s current building, Wesemann Hall, built in 1986. When it was built, said Valparaiso University School of Law Associate Dean Curt Cichowski, who has overseen the Heritage Hall project, the law school didn’t include space for a clinic.

“It was an old building on campus and not maintained very well,” he said.

“The law clinic has always been in an old building that has seen better days,” she said via e-mail. “Since I started in 1983, we went from Lembke Hall across the lawn to Heritage Hall. Heritage Hall, as it stood when we moved in, was a beautiful building from the outside, with lots of character. When you walked inside, you could tell it had been through stages of renovations. You saw ’60s paneling, mixed with ’80s carpeting, sprinkled with a hodgepodge of furniture confiscated from the basement of the law school.”

The aesthetic issues weren’t the only problems in Heritage Hall.

“In the old building, the paint on the walls was bubbled and peeling. The stairway was narrow and steep. The brick was crumbling. We had bees, ladybugs, bats, and mice,” she said. “The floors had large bumps under the carpet, which were actually supports that helped hold up the building. We had no storage space. The windows leaked. There were retired wires throughout the building, both inside and out. Limited space to hold class. Clients were able to roam the building without any supervision. The only handicap access was to enter through the director’s office.”

The clinical program, which helps clients with criminal, civil, juvenile, domestic violence, tax, sports law, wrongful conviction cases, and mediations, helps about 700 clients every year. It has been in Heritage Hall since 1987, with the exception of the past year. 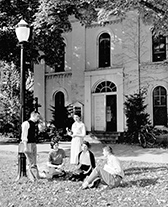 The school worked with architects to recreate it to specifications of the historic building, as shown in the mid-1900s. (Submitted photo)

It was the clinic’s annual fundraiser that got the attention of a descendant of two early graduates of the law school. While not a lawyer herself, she wanted to preserve the history of the school, including her relatives’ time there in the early 1900s.

The donor started working with the law school on the project about four years ago. She helped raise a little more than half of the needed $9 million for the restoration project, Cichowski said, and the rest of the funding came from other donors.

During the early phases of the project, when the two main goals were to preserve the historic aspects of the building while adding modern amenities for the school, there was bad news and worse news.

Structural engineers said the building was in bad shape, he said. The restrooms, which were not a part of the original building, had issues, and the building never had grounded power.

“The worst news was that the bricks weren’t structurally sound,” he said. “The engineers joked with us that the roof was the only thing still holding the building together.”

The compromise was a building design “that to the inch was built to the exact specifications of Heritage Hall. The building was disassembled, and we harvested some of the bricks and original timbers,” he said.

The bricks were then reused as part of the new building’s interior, and the old timbers were made into benches and details in building.

After a year of construction, Cichowski said he loved the end result for a number of reasons.

“The law school building was built in 1986, and it looks like it was built 1986. But this building looks like it belongs on a college campus. The only difference was we couldn’t put the third floor back to what it was, but we designed a façade to look like it,” he said.

The back of the building is an added wing for a trial skills center, which includes a teaching courtroom and conference rooms. The courtroom will include a jury box, counsel tables, and a bench, as well as “everything that exists in the greatest courtroom in the country,” he said.

“If you think about it – in a law school it’s common to have classrooms for lecture halls, but all of the skills of being a lawyer – interviewing, intake, negotiations, arbitrations, all the things lawyers do on a daily basis – none of those large spaces support teaching and lawyering well,” he said. “… It doesn’t make sense for lessons about one-on-one interactions to take place in a classroom where the students need to pretend it’s really an office space.”

He added that authenticity in the clinical experience is key because it is “the greatest educational experience for a student. They are working with live clients, and there are usually just 10 students, so it’s like working for a small firm.”

Because it’s the “last remaining vestige of old campus,” he said, the building will also serve as a museum of what the old campus looked like – the original Valparaiso University. Old pictures and maps of the old campus will be among the items on display for visitors.

“I have been in the building several times during different stages of rebuild,” Tengblad said. “When you see the plans, it is just a picture on paper. To see it come to life is amazing. The building still has the same charm it had – only better. It is a modernized building, yet has the look of 100 years ago.

“Now, for the first time,” she added, “we will have a quality building that reflects the high-quality representation that is provided by the law clinic.”•