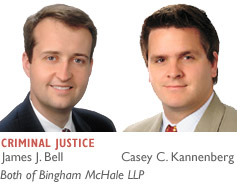 The Indiana Constitution often affords criminal defendants greater protections than the U.S Constitution. In the past two months, Indiana courts have demonstrated this to be true, particularly in the context of search and seizure. As show below, in addressing these issues, Indiana courts have expressed a clear willingness to diverge from U.S. Constitutional doctrines when it comes to protecting individual rights.

“Knock-and-Announce” and “Attenuation Doctrine” Under the Indiana Constitution

In the landmark case of Hudson v. Michigan, the U.S. Supreme Court held that the exclusionary rule does not apply when police officers violate the knock-and-announce rule. Hudson v. Michigan, 547 U.S. 586, 594 (2006). In Lacey, the Indiana Court of Appeals departed from the federal standard and found that a knock-and-announce violation may lead to the suppression of evidence.

In Lacey, the police obtained a warrant to search the defendant’s residence for illegal drugs and weapons. Lacey v. State, 931 N.E.2d 378, 381 (Ind. Ct. App. 2010). The Police Emergency Services Team decided to execute a “no-knock” search because of the defendant’s criminal history. Id. However, this criminal history was never disclosed to a neutral magistrate. Subsequently, the police officers forcefully entered the residence using a ramming device and announced their presence as they gained entry. Id. After a search and seizure, the defendant was charged with possession of a weapon, possession of marijuana, and maintaining a common nuisance. Id. The defendant moved to suppress evidence obtained in the search because the “no-knock” search violated his rights under the Indiana Constitution. Id.

The Indiana Court of Appeals held that “the unilateral decision to dispense with the knock-and-announce rule [was] unreasonable under Article 1, Section 11 of the Indiana Constitution where the relevant facts could have been presented in application for a ‘no-knock’ warrant.” Lacey, 931 N.E.2d at 385. In so holding, the court observed that there were no exigent circumstances to justify a no-knock search. Id. Additionally, the court determined that the officer should have presented the defendant’s criminal history to a neutral magistrate when obtaining the warrant. Id. At 384. The court then determined that the appropriate remedy for the constitutional violation was suppression of the evidence. In so doing, the court explicitly rejected the U.S. Supreme Court’s Fourth Amendment analysis in Hudson.

In Trotter, the Indiana Court of Appeals again parted ways with the U.S. Supreme Court with respect to the attenuation doctrine. Under Fourth Amendment jurisprudence, the exclusionary rule does not apply when the connection between unlawful police conduct and the subsequent discovery of evidence “become[s] so attenuated that the deterrent effect of the exclusionary rule no longer justifies its cost.” Brown v. Illinois, 422 U.S. 590, 609 (1975) (Powell, J., concurring).

In Trotter, the defendant was charged with two class D felonies for pointing a firearm and criminal recklessness after police officers unlawfully entered a pole barn and discovered the defendant pointing a firearm at them. Trotter v. State, 2010 Ind. App. LEXIS 1686, at *5 (Ind. Ct. App. Sept. 10, 2010). The defendant moved to suppress evidence, claiming that the officers’ warrantless entry into the private residence violated his Fourth Amendment rights. Id. At *5–6. Ultimately, the trial court determined that suppression was not required “pursuant to the attenuation doctrine exception to the exclusionary rule.” Id at *7.

On appeal, the Indiana Court of Appeals first determined that the officers’ warrantless entry violated both the U.S. and Indiana Constitutions. Id. At *13. The Court then turned to the State’s argument that the evidence should not be suppressed because the defendants’ pointing a firearm at the officers “dissipated the taint” of the unlawful entry. Trotter, 2010 Ind. App. LEXIS, at *15. The court disagreed, and held that “the attenuation doctrine as it currently exists as a separate analysis to circumvent the exclusionary rule for Fourth Amendment purposes has no application under the Indiana Constitution.” Id. At *17–18. Therefore, because the attenuation doctrine did not apply, suppression of the evidence was warranted. Id. At *18.

In Michigan v. Long, 463 U.S. 1032, 1040 (1983), the United States Supreme Court held that when “a state court decision fairly appears to rest primarily on federal law, or to be interwoven with the federal law, and when the adequacy of any possible state law ground is not clear from the face of the opinion,” it is assumed that the decision was grounded on federal law. Similarly, when a defendant fails to provide a state constitutional claim “separate” from a federal claim, our state courts will “only analyze” the claim under federal standards. Games v. State, 684 N.E.2d 466, 473 n. 7 (Ind. 1997) overruled on other grounds.•