Home » 5 Court of Appeals judges up for retention 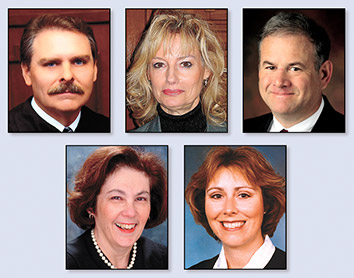 One third of the Indiana Court of Appeals judges face a retention vote this year, including two initially appointed within the past three years to fill vacancies on the state’s second highest court.

Voters statewide will have the chance Nov. 2 to cast a “yes” or “no” vote in deciding whether to keep some of those jurists on the bench for 10 more years to craft opinions, interpret state law, and represent the Hoosier legal world in setting judicial standards. Those facing retention this year are:

Judge L. Mark Bailey, a former Decatur County judge who was appointed to the appellate bench in 1998 and retained in 2000. He represents the First District, which comprises southern Indiana.

Judge Elaine B. Brown, who served on the Dubois Superior Court for a total of 15 years before she was appointed to the appellate bench in May 2008. This is her first retention vote after being named to the court, and she represents the Fifth District that includes the entire state.

Judge Cale J. Bradford, who served for more than 10 years as a Marion Superior judge before being elevated to the appellate bench Aug. 1, 2007. He represents the Second District, which includes the central part of the state.

Judge Melissa S. May, a former 14-year insurance defense and personal injury attorney in Evansville who was appointed to the Court of Appeals in April 1998 and then retained in 2000. She represents the Fourth District that encompasses the entire state.

Judge Margret G. Robb, who was appointed to the appeals court in July 1998 after 20 years of general practice in Lafayette and service as a bankruptcy trustee for the Northern District of Indiana. Judge Robb also has served as a mediator and deputy public defender. She represents the Fifth District that includes the entire state and was last retained in 2000.

With Indiana requiring appellate judges to step down from active service at age 75, none of those facing retention this year would hit that mandatory retirement age and could serve at least one more term if they chose.

All point to their experience and judicial service on the bench as reasons they each should be allowed to remain on the appellate court. Together, they emphasize that more access, transparency, and efficiency through technology are key to making sure the judiciary can continue working effectively in the coming years.

“Indiana is at the forefront of efforts to make the judiciary more transparent,” the five wrote in a joint response to questions posed by Indiana Lawyer, citing the increase in webcasting and online information about cases and judges. “When we help our citizens better understand the function and operation of the appellate court system, we ultimately give them more confidence in the justice system as a whole.”


One tool being used to help the legal community and general public keep informed about these jurists is the state judiciary’s website at www.in.gov/judiciary/retention, which was updated this summer to mirror the one created in 2008 after Senate President Pro Tem David Long urged the judiciary to provide more information about the retention process to voters.

In addition, the Indiana State Bar Association’s Improvements in the Judicial System Committee e-mailed a survey to its members statewide in September asking attorneys to take a confidential “yes” or “no” poll on whether those judges should be retained. The surveys went out five times to give everyone a chance to respond, and results were expected to be released Oct. 12 – after deadline for this story. This was the second time attorneys have received the poll by e-mail rather than traditional paper ballot; the first was in 2008, when three Indiana Supreme Court justices, one Court of Appeals judge, and the Tax Court judge were up for retention. About 8,000 members were polled two years ago and about 1,500 cast ballots, translating to an 18.5 percent response rate that overwhelmingly supported the jurists.•