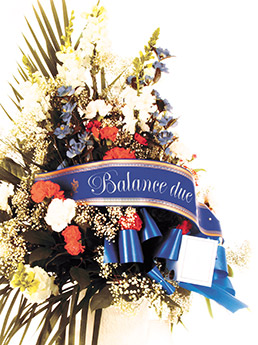 These days, it feels as though Uncle Sam is laughing at estate planning and wealth transfer attorneys.

The old adage by Benjamin Franklin about death and taxes being the only certainties is no longer certain, thanks to U.S. congressional inactivity about how to handle the federal estate tax that expires at the end of this year and is set to revert to decade-old levels. Effectively, that means a tax increase for people, though Indiana attorneys specializing in this area say they can’t even advise their clients on how to plan for what’s ahead.

“Not knowing what the prediction is going to be has caused a significant hurdle in planning,” said Indianapolis attorney R.J. McConnell at Bose McKinney & Evans. “Many families owning Indiana businesses don’t know how to plan for their estates, and that’s most of my client base. No one wants anything extraordinary here… most families just want to know what the rules are. That is, at a minimum, what Congress owes us.”

Attorneys say that even as we are about a month away from the start of 2011, no one is certain what taxes might be in place, when they’ll apply, and what income levels or rates might be attached. That means that some attorneys are taking a cautious “disclaimer-style” approach to any wills and estate plans, just in case something changes and a client doesn’t want to get stuck with any particular contractual tax reality.

In 2001, lawmakers lowered the estate tax rate and boosted the amount of money exempt from the tax through 2010. The rate gradually went from 55 percent in 2001 to 45 percent in 2009, before the tax evaporated completely this year. The amount of money that could be passed on tax-free also rose steadily, from $1 million to $3.5 million for dying individuals in 2009. This year, heirs have been able to pocket the entire estate without handing anything over to Uncle Sam.

The House of Representatives passed a permanent extension to the 2009 rates and exemption last year, but it stalled in the Senate after a contentious debate about tax increases. The bill would have set a top rate of 35 percent on estates worth more than $5 million, but many Republicans pushed for a permanent repeal of the tax. That makes predicting the path this might take uncertain, as many who oppose the tax in principle don’t want the tax to skyrocket because Congress can’t forge an agreement.

Attorneys watching the legislative debate predict the estate tax issue could be tied in with a larger package addressing broader Bush-era income and capital gains tax cuts, but few are willing to place bets on the outcome.

Jeff Adams of Indianapolis, a member of the Indiana State Bar Association’s Estate Planning Section, says that the Republican shift resulting from the recent election goes in favor of those who favor a lower tax rate and higher exemption rate, so the decision could be pushed to the next Congress once that party takes over more control.

“We would have hoped that we’d gotten something at this point, or by the end of the year because of retroactivity concerns, but I’m not as convinced as I’d like to be at this point that anything will happen,” he said.

Adams said questions and concerns about these estate tax issues have been at the forefront of discussion for more than a year, as the federal estate tax has decreased and led up to what was clear would happen all along – a 2010 expiration and 2011 renewal. Because lawmakers haven’t acted on it, more confusion has been created for those trying to advise clients about the best way to plan. Seminars late last year and early this year have faded and there hasn’t been much guidance for attorneys trying to navigate these waters, he said.

For example, some questions about Indiana law exist pertaining to how funding clauses are drafted in documents addressing estate plans and wealth transfer. Some might opt for the maximum exemption amount, but it’s been unclear whether someone must fund these credit shelter trusts with all assets or none of the assets. A state statute trying to address that hasn’t clearly offered guidance on what the impact might truly be, he said.

Another issue has been the reporting requirements for the taxes and exemptions, Adams said. The Internal Revenue Service recently released a new form, but attorneys haven’t had a chance to completely process what it means.

“We will need practitioners who have any deaths this year to look at that and learn how they need to report,” he said.

But even more significant, some attorneys wonder whether Congress will revive the federal estate tax retroactively and how that might apply to deaths that happened this year, such as the case of billionaire New York Yankees owner George Steinbrenner who died in July. The estate of a person who died this year with an estate valued at $1.15 billion saved an estimated $500 million in what would have to be paid.

Proposed changes would seal the 2010 gap retroactively, meaning Steinbrenner and anyone else who died this year and made more than $3.5 million individually would have to pay the 55 percent estate tax.

Adams says he’s been instructing clients that it might be worth holding off on complete distributions from those 2010 deaths until it is clear what will happen. Financial planners can calculate a worst-case scenario tax and distribute whatever the excess amount might be, but then wait to do the entire distribution until Congress makes a decision.

“You can do some planning, but in many ways it’s wait and see,” he said. “I opt for disclaimer planning, where you give everything to a spouse and can then disclaim it to the estate and marital trusts rather than putting a built-in formula. Many of these formulas are out there in documents now, and this allows some flexibility.”

McConnell doesn’t believe that retroactivity would be possible, because it might raise constitutional questions about fairness that lawmakers would have to grapple with, such as whether the rules should have been made up ahead of time or as we go and then tacked on later to events that already happened.

For families, that might be devastating. They have experienced a death and then a year or more later heirs learn that they’re suddenly hit with a new multi-million dollar tax and forced to sell a business or part of their property in a current bad market.

“How is that fair for someone who has played by all the rules in place at the time?” he asked.

After the Nov. 2 election, Congress returned briefly before a weeklong-break for Thanksgiving, and then it was scheduled to return Nov. 29 for any lame-duck action that can be agreed on before the year ends.

If Congress were to opt for another year without an estate tax, McConnell says that would be a mixed blessing – a pro that his clients wouldn’t get slammed with a new tax, but a negative in that it would just extend the confusion. He’d prefer to see a lower exemption implemented with a higher tax rate, than have any tax rate that’s only in place for a year.

“That just continues the uncertainty we’ve had,” he said, “and it doesn’t help anyone.”•