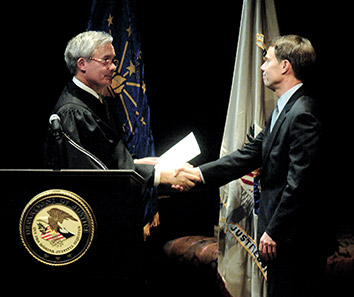 U.S. Attorney for the Southern District of Indiana Joseph H. Hogsett took his official oath of office on Feb. 18 before a crowd of more than 200 members of the state’s legal community as well as U.S. Attorney General Eric Holder. The investiture ceremony was held at the Indiana Repertory Theatre in Indianapolis.

Bingham McHale managing partner Toby McClamroch served as the master of ceremony. Hogsett has worked at Bingham McHale periodically during the past two decades when he was not holding public office. 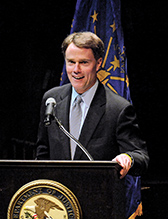 Hogsett has been working in the U.S. attorney’s office since receiving Senate confirmation Sept. 30, and at his investiture he reaffirmed his commitment to be tough on crime and the worst offenders while being “compassionate to the best of the rest.”

Expressing regret for not being able to attend were both former Sen. Evan Bayh, who recommended Hogsett’s nomination to President Barack Obama, and former President Bill Clinton, who Hogsett became friends with while traveling throughout the U.S. in 2008.•