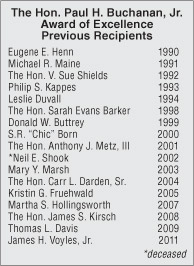 The Hon. Paul H. Buchanan, Jr. Award of Excellence is presented “from time to time”. It is intended to both reward the accomplishments of the recipient and to inspire others to such service. The award is given to member of the Indianapolis Bar Association whose attainments as a lawyer have been notable; whose contributions to the Association have been unique; and whose honorable service to the profession has extended over a significant period of time. James H. Voyles, Jr. of Voyles Zahn Paul Hogan & Merriman was determined to be a worthy recipient and by the comments made at a recent luncheon in his honor, he certainly epitomizes the lawyer deserving of such recognition.

Introduced during the program by Kevin McGoff, 2007 President of the Indianapolis Bar and a long-time friend, Voyles’ long service was highlighted. Serving first in 1979 as a member of then IndyBar President, Boyd Hovde’s executive committee, Voyles service has certainly extended over a significant period of time. Voyles has served in various board capacities with five other presidents over the years culminating in service as Indianapolis Bar Association President in 2009.

McGoff noted, “Beyond the formal roles Jim has filled, he has often made himself available behind the scenes. Sharing ideas, serving on committees, making contact with people he knows to further the interest of our profession are second nature to Jim. Even so, much of the time with only a few people were aware of his ongoing involvement.”

“When you want something done, you ask the busiest person in the room to tackle the project. Those who have worked with Jim, on cases or through the Bar know that this adage applies to him. No matter where he is; off in trial, out of town, or in the middle of a lake fishing Jim will likely return your call within 24 hours,” McGoff added.

Voyles’ achievements as a lawyer are notable. His client list is long and filled with high profile clients who have consistently entrusted their future in him. A nationally-known criminal defense attorney, Voyles currently serves on the board of the National Association of Criminal Defense Attorneys. He has devoted his career to defending people accused of serious crimes.

“In preparing to introduce Jim it struck me that his success as a lawyer, which has made him highly visible in the community, has put him in the position of having people from many walks of life scrutinize how this lawyer carries himself. The manner in which Jim has represented the profession and hence every lawyer in our legal community is notable and more significant than his success as a lawyer in his selection for the Buchanan Award,” McGoff said.

McGoff summed up Voyles’ selection by saying, “Jim likes lawyers – clearly likes being a lawyer – even named his home, House of the Lawyer. But most importantly he carries himself in a way so that other people come away liking lawyers as well.”