Never before has networking been more important to professional growth. In fact, some would argue in today’s business climate it’s not what you know, but who you know that can make the difference in a lawyer’s career.

Judge Tim Oakes of the Marion Superior Court recently addressed a group of law students on the topic of networking. Though he didn’t promise to provide a magic bullet for successfully building relationships, he did give several helpful tips particularly for those seeking to practice in the Indianapolis area. 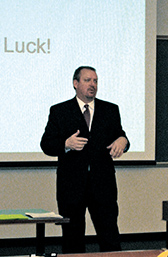 The Honorable Tim W. Oakes of the Marion Superior Court shares his ideas for successful networking.

“Indy is a big town with a small legal community,” he said. “Don’t overlook someone you meet at the grocery, your kid’s school, a playgroup or even your neighborhood bar. You are always networking or should be.”

He noted that knowing who you is essential in relationship building.

“Don’t be superficial. It’s a turn-off for attorneys when networking,” Judge Oakes said. “Relax, and know yourself. Know what you want and where you want to be realistically. You can’t be afraid of your weaknesses. Everybody in the room knows what they are. It’s obvious. The trick is flipping them to your advantage.”

He also suggested that those seeking to widen their circle of contacts try new things. Be a servant leader by getting out and helping others.

“It’s about working hard to be a good person and hopefully being even better to others than they are to you,” he said.

Joel Tragessor of Frost Brown Todd, and Nancy Goldberg and Maria Castetter of the Marion County Prosecutor’s Office give their time to mentor evening students at Indiana University School of Law–Indianapolis.

Interestingly Judge Oakes mentioned that he has never received a job from an interview, though he’s had many career opportunities. He said, “There’s always an “in”. It just may not be through the front door. Search for it! Do your homework.”

Most importantly, he concluded, “Networking isn’t about now; it’s a long-term proposition,” Judge Oakes said. He emphasized, “Contacts you make today aren’t about the May 2011 job. It’s the 2016 job that you’re working toward.”•