In 1871, Ben Sawyer was executed in a jail courtyard, after being tried and convicted for the murder of his wife. Sawyer was the second – and last – criminal to be publicly executed in Vanderburgh County. Sawyer’s story is one of many that historian Bill Bartelt uncovered while researching the history of Vanderburgh County law for the Evansville Bar Association.

The EBA commissioned Bartelt to research the county’s legal history for several projects that will be unveiled at the bar association’s 100th anniversary celebration later this month. The two-day event will kickoff at 8 a.m. April 28, when more than 250 students from Evansville-area high schools will participate in “mock trial” day. Since 1933, the EBA has scheduled this day for students to act as attorneys, witnesses, and juries. Real judges and magistrates sit on the bench for the mock trials. 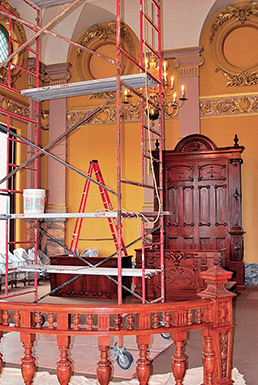 At its anniversary celebration, the Evansville Bar Association will reveal to the public the Randall T. Shepard courtroom, shown here during remodeling. The Old Courthouse Foundation worked with the architect during renovation to ensure historic accuracy. (Submitted photo)

“I would have done this, I think, in the winter or spring of 1965. That seems like a hundred years ago,” Chief Justice Shepard said. “As I remember, the case involved a chicken farmer arrested and charged with drunk driving.”

Shepard remembers losing that case to Charles Berger, who also went on to become an attorney and has a practice in Evansville.

Then 18, Shepard hadn’t decided what career he wanted to pursue, but he had considered law as a vocation. He said the mock trial was “certainly a factor” in his decision to become a lawyer.

On April 29, Shepard will make remarks at an evening reception at the Old Vanderburgh County Courthouse. The EBA will debut the remodeled Superior courtroom, which has been renamed the Randall T. Shepard Courtroom.

“I learned the most important skills and values of law from Evansville lawyers in the course of being a part of that legal community,” Shepard said. “Although I have been away for a long time, I still treasure what those lawyers and judges taught me. So the thoughtfulness (of naming the courtroom in his honor) is very heartwarming.”

Adjacent to the courtroom is the new Vanderburgh County Legal History Center, which will feature an 18-foot-tall timeline Bartelt created that begins in 1818. Video kiosks will air segments produced by students in Reitz High School’s “Feel the History” course.

Indiana Lawyer Online EXTRA
For a timeline on the history of the Evansville Bar Association, click here.

The EBA met last year with Reitz teacher Jeremy Villines and Feel the History course co-creators Jon Carl and Jerry Hughes to discuss the student video project. Hughes said the bar association asked if the class could produce historical videos for its 100th anniversary, remembering that the class had previously filmed a segment about the old courthouse. (That segment can be viewed on the Feel the History website: www.feelthehistory.com.)

Bartelt provided the preliminary background material for the student videos. “But the kids took it further,” Hughes said, by conducting additional research on the topics they chose for the videos.

For one video, students chose subject Leslie “Mad Dog” Irvin, a man who was sentenced to death for killing six people in the tri-state area in the 1950s. The U.S. Supreme Court later overturned Irvin’s death sentence, ruling in its decision on Irvin v. Dowd 359 U.S. 394 (1959) that Irvin had not received a fair trial, due to the effect of pre-trial publicity.

Hughes said that in addition to being a permanent fixture in the old courthouse, the videos will air later this year on local Public Broadcasting affiliate WNIN. Students will offer a sneak preview of their work at a luncheon on April 28.

The planning for the anniversary celebration began three years ago, when past EBA President Dan Carwile assembled and chaired the committee to raise the nearly $300,000 needed for the restoration of the old courthouse. Current EBA President Krista Lockyear and Judge Carl Heldt worked closely with The Old Courthouse Foundation and the architect working on the project to make sure the building would be both functional and historically accurate.