Law School Briefs is Indiana Lawyer’s section highlighting news from law schools in Indiana. While IL has always covered law school news and continues to keep up with law school websites and press releases for updates, we gladly accept submissions for this section from law students, professors, alumni, and others who want to share law school-related news. If you’d like to submit news or a photo from an event, please send it to Jenny Montgomery at [email protected], along with contact information for any follow-up questions at least two weeks in advance of the issue date.

A man who was nearly executed for a crime he didn’t commit and went on to become the public face of the abolition of the death penalty in Illinois will present a lecture at Indiana University Purdue University – Indianapolis.

Randy Steidl will tell his story in a lecture titled “Convicted, Condemned and Cleared: How an Exonerated Man Helped Abolish the Illinois Death Penalty.” The talk, which is free and open to the public, will be at 7 p.m. April 14 in the IUPUI Campus Center, Room 450C.

Following the lecture, a panel will discuss whether the death penalty is good public policy. Panelists will include Jim White, a former Indiana state trooper and current faculty member in the School of Public and Environmental Affairs’ Criminal Justice and Public Safety program; Monica Foster, an internationally known criminal defense attorney who specializes in capital appeals; and Crystal Garcia, a criminologist and faculty member in SPEA’s Criminal Justice and Public Safety program.

Steidl spent 17 years in prison, including 12 on death row, after he was convicted in the 1986 murder of two newlyweds in Southern Illinois. According to Witness to Innocence, an organization of exonerated death row survivors and their loved ones, he received poor legal representation, there was no DNA evidence presented in the case, and witnesses fabricated evidence because of police misconduct.

A federal judge ordered a new trial for Steidl in 2003 after the Center on Wrongful Convictions at Northwestern University got involved and an Illinois State Police investigation cast doubt on the conduct of the murder investigation and trial. The state re-investigated the case, tested DNA evidence, found no link to Steidl, and the state decided against retrying the case. 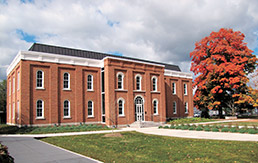 Built in 1875, the building has served many functions through the years – as a dormitory and barracks during World War I, a machinery classroom, and a library. Now, the building will be the home of the Lawyering Skills Center.

“The Lawyering Skills Center is the legal equivalent of a teaching hospital,” said Valparaiso Law Associate Dean Curt Cichowski, who oversaw the reconstruction. “Classrooms, lecture halls, and other large spaces don’t always support teaching and lawyering well. So we have a courtroom with jury box, counsel tables, bench and everything that exists in the greatest courtroom in the country.”

Offices for the school’s legal clinic will be in the new building, which is connected to neighboring Wesemann Hall via an elliptically shaped exterior plaza.

Architects were able to salvage some materials from the old Heritage Hall, including the original structural timbers that have been repurposed as benches for the interior of the new building. Internal accent walls were built with bricks hand-picked from the exterior of the old building.

The reconstructed building features several exhibits that memorialize the history of Heritage Hall.

DNA expert to speak at IU

An internationally recognized forensic geneticist who has worked on the successful exonerations of seven people will present a free, public lecture at Indiana University on how DNA is used to free the wrongly convicted and how informatics is being misused to pervert justice.

Boise State University professor Greg Hampikian, who holds joint appointments in biology and criminal justice, will speak at 3 p.m. April 15, at IU’s Lindley Hall, Room 102. He is the co-author of Exit to Freedom, which documents Calvin Johnson’s successful fight to prove his innocence after serving 17 years of a life sentence in a Georgia prison.

Hampikian, a board member of the Georgia Innocence Project and founder and director of the Idaho Innocence Project, is also one of several DNA experts who called into question the DNA evidence used to convict American college student Amanda Knox in the 2007 murder and sexual assault of Meredith Kercher in Italy. In the past year, Italian judges have ordered a retrial for Knox and a reexamination of the DNA evidence used in the original trial.

Notre Dame Law School announced on April 1 that professor Vincent Rougeau has been named the next dean of Boston College Law School. The professor of contracts, real estate transactions, and Catholic social thought will assume his new post this summer.