Earlier this month, Maryland became the first state to adopt the International Green Construction Code. Three years ago, Maryland was the site of the country’s first large green building lawsuit, which attempted to answer the question of who is at fault when a green building fails to meet expectations. It’s one of the many murky areas in green construction.

“Like any sort of emerging industry, it’s going to continue to evolve until there’s kind of a widely accepted view of what should be done,” said Rob Inselberg, attorney for Indianapolis firm Wooden & McLaughlin.

The need for LEED

Inselberg, 32, said that a sluggish real estate market made him think about how he could be more marketable as an attorney. He decided to brush up on green construction and earned his Leadership in Energy and Environmental Design (LEED) Green Associate credentials.

Before 2000, any developer could call a project “green,” without hard evidence to support that claim. So the USGBC implemented the LEED program to ensure green buildings met certain expectations.

Developers who are seeking LEED certification must submit a project to the GBCI and earn at least 26 points on the LEED rating scale to be recognized as LEED-certified. Points are awarded for a variety of construction elements, including indoor air quality, use of recycled materials, and water use reduction. LEED assigns buildings one of four ratings: certified, silver, gold, and platinum – the highest LEED rating.

One misstep in the LEED-certification process can cause a building to either fail to meet certifications or fail to achieve the rating the developer envisioned. And Inselberg said with little precedent to rely on, it’s hard to say who assumes risk for each element of the design.

Carmel attorney Will Kelley is one of three LEED-accredited professionals (APs) at Drewry Simmons Vornehm. He said that the firm was seeing an increasing number of clients who had questions about LEED building certification.

“We said, ‘We need to understand the nuts and bolts of the certification process,’” Kelley said, so he and the others decided to pursue LEED accreditation.

Kelley said the questions about LEED vary, depending on who’s asking.

“With developers and owners, the question is often the return on investment,” Kelley said.

Inselberg said owners are looking for ways to reduce costs, so they may be put off by what could be an initially high investment, especially in projects that install the latest green technology for energy or air systems. But he said some studies suggest the initial investment is offset by a shorter return time.

Contractors and designers are more interested in knowing what their contractual obligations are, Kelley said. A standard contract not designed for green construction will be unable to answer those questions – a fact that became evident in some high-profile green construction cases recently. 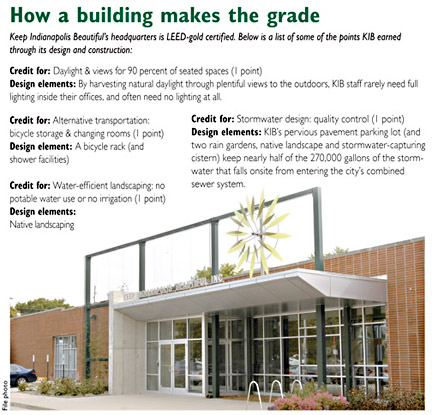 Maryland’s Southern Builders v. Shaw Development, No. 19-C-07-011405, was one of the first legal cases arising from green construction. Southern Builders sued Shaw to enforce a mechanic’s lien claim on the 23-unit condominium project, and Shaw Development countersued, because the building did not achieve the LEED certification Shaw had anticipated, causing Shaw to lose tax credits for the project it had received from the state of Maryland. It is a case many attorneys cite as evidence that clear contract language is essential in avoiding green building litigation.

Adam McClane, director of operations for The Nature Conservancy of Indiana, helped the organization apply for LEED certification for its Efroymson Conservation Center. “I would say probably the trickiest thing I saw from a contract standpoint is who owns what responsibility between the contractor and the architect,” he said.

“We asked the architect for a building that would achieve LEED certification, but a lot of those points require execution by the contractor,” McClane said.

As of Indiana Lawyer deadline, McClane said he was still waiting to hear news from LEED. The certification process generally takes a few months, as reviewers must ensure that the building has earned all the points that it claims to meet. The baseline for a platinum rating is 52 points, which is the conservancy’s goal.

“We’re internally tracking at 56 … so we feel like there’s a good gap there if we did lose a point or two,” McClane said.

In 2007, the state of Indiana missed a LEED-silver certification for its Forensic and Health Sciences Laboratories by four points.

Brian Renner, deputy commissioner for the Indiana Department of Administration, said that the state would not attempt to earn the additional four points needed for LEED-silver, due to the expense involved. As a state agency, the DOA would not qualify for any of the tax incentives that might motivate a private building owner to make adjustments.

“Initially, the first buildings we were seeking certification on were the two hospital projects – and I believe that it was probably the first time the contractors and probably even the architects were involved in a LEED-certification process,” he said. “It was a steep learning curve for all parties involved.”

In 2008, Gov. Mitch Daniels signed an executive order mandating that all new state buildings must achieve LEED-silver status. Renner said the state has not begun any new construction projects since then.

The future of green building

Inselberg said as more people begin to uphold green principles in their personal lives, they may be looking to do the same in their professional lives. He said business owners may even be willing to pay more to work in a green building. Some studies suggest there are health benefits associated with working in a green building, which, in theory, would mean a happier, healthier workforce. And he said he thinks commercial, rather than residential, developers will likely lead the field in green construction.

Kelley said that attorneys are keeping an eye on the development of the International Green Construction Code. The code is being revised through 2011, and if other states follow Maryland’s lead in 2012 and adopt the code, it could move green construction one step closer to adopting a set of best practices.