Home » In his honor… 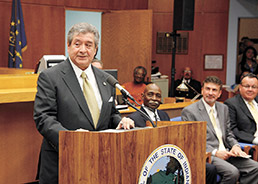 A ceremony May 11 marked the official renaming and dedication of the Lake Superior court building in East Chicago in honor of recently retired Lake Circuit Judge Lorenzo Arredondo. The judge retired at the end of 2010, after a 34-year career in the county judiciary. Judge Arredondo is the longest-serving Latino trial judge nationwide. He led the creation of a family division in the Circuit Court and is a founding president of the Hispanic National Bar Association. He also received a Sagamore of the Wabash on behalf of Gov. Mitch Daniels at the dedication.

The Lorenzo Arredondo Justice Center houses the courtroom of Lake Superior Judge Calvin Hawkins, who led the renaming effort. Across from that courtroom is a display of memorabilia, awards, and plaques that Judge Arredondo received during his career. Talking about the educational opportunity involved in this dedication, Judge Arredondo said this coincides with the renaming of a local library room in his honor that will help future generations recognize they can achieve their dreams and hold important roles no matter where they come from.• 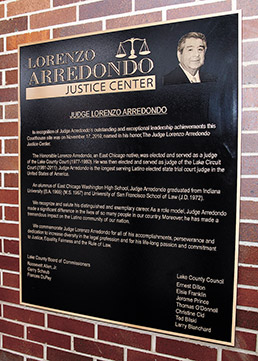