Home » IBA: Rundle Honored as Paralegal of the Year

Alison Hoffman Rundle of Cross, Woolsey & Glazier, has been honored as the 2011 Indianapolis Bar Association Paralegal of the Year. She was presented with the award at a sold out luncheon to recognize all paralegals in the Indianapolis legal community.

Nominated by Melanie Reichert of Broyles Kight & Ricafort, Rundle was selected from among a distinguished list of nominees for her professionalism and dedication to the service of her clients. The following is a reprint of the nomination submitted on her behalf highlighting what made her selection the popular decision among the selection committee members.

Alison Hoffman Rundle spent the last approximately 17 years making the professional lives of her employers much easier while brightening their days with her boundless energy and ever-present smile. 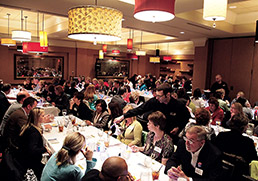 Alison graduated from Ball State University with a degree in paralegal studies in 1994. Shortly thereafter, she began working for the infamous Maxine Bennett. As those who knew her may remember, Maxine was not easily pleased. Yet Alison earned Maxine’s trust and respect. Alison’s compassion and professionalism allowed her to work well with Maxine’s family law clients.

That same compassion allowed Alison to easily transitioned into a paralegal position with personal injury attorney, Robert Ebbs. She completed complicated discovery projects and assisted Mr. Ebbs with demand letters, mediation/settlement preparation and trial preparation. She had consistent contact with Mr. Ebbs’ clients and handled their questions in an efficient and professional manner. It was during her tenure with Mr. Ebbs that I met Allison in 1997. A second year law student, I clerked for Pequita Buis – who shared office space with Mr. Ebbs. Alison, another employee and I shared a small office space. If two of the three of us pushed our chairs out at the same time, collisions would have occurred! Thus, I regularly observed Alison interacting with her employees and with their clients.

Alison worked with general practitioner Robert Nice, and has now returned to her family law roots by working with Nancy Cross. I (and the other family law attorneys at BKR) have cases with Nancy and call on Alison frequently to assist with discovery issues, scheduling and other case management issues. Nancy has told me privately what an asset Alison is to her and to her firm. Attorneys in my office have told me privately how badly they would love to steal Alison away from Nancy!

One may think that being excellent at one’s job is not sufficient to warrant a designation of Paralegal of the Year. However, Alison has been an excellent paralegal while dealing with extreme circumstances in her personal life. 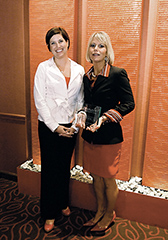 Her first child, a little boy, was born in July 2003. Shortly thereafter, she was diagnosed with breast cancer. Having barely the time to enjoy the wonder that is motherhood, Alison was faced with the very real possibility that her newborn would grow up without her. Fortunately, her lump was detected in early stages, the cancer had not metastasized and her treatment was a success. Throughout her battle against cancer, Alison maintained the same amazingly positive attitude that prevails in her daily dealings with her employers and with clients. She remains active with the Race for the Cure.

Alison gave birth to girls in 2005 and 2006. However, her marriage deteriorated and she filed for divorce in early 2007. For months after filing, Alison was the victim of terrible domestic violence. She was living the nightmare through which she had helped so many clients. In September 2007, her estranged husband broke into her home, kidnapped her, and held her against her will for approximately 11 hours. That man has since been convicted of crimes against Alison in two separate counties and is serving a lengthy prison sentence.

Alison got through the trials in personal life with the love and support of her family and friends…and with her work. Working each day not only allowed her to provide for her family as a single parent, but it gave her the stability and consistency she needed to persevere.

In September 2010, Alison remarried – a wonderful, devoted man with children of his own. Not only did her co-workers at Cross Woolsey Glazier attend her wedding – several of them were integral in the planning and in the reception. Nancy Cross secured the location and catered the event. Fellow paralegals and legal assistants volunteered to help with food, set up, and clean up. They all smiled while Alison enjoyed her special day – a testament of the affection and respect they have for her as a paralegal and as a friend.

For all these reasons, Alison Hoffman Rundle has made exceptional contributions to the legal community, has been an excellent role model for the paralegal profession, and is extremely deserving of special recognition. Thank you for considering her nomination.•