Time is money. Money makes the world go ’round. So what is so powerful that it can motivate busy lawyers to give up both? Perhaps it is the realization that with a small donation of each, they have the power to help alleviate hunger among children and families in central Indiana.

The Indiana Trial Lawyers Association has partnered with Gleaners Food Bank of Indiana to help provide weekend food to school-age children and get basic necessities to families in need. 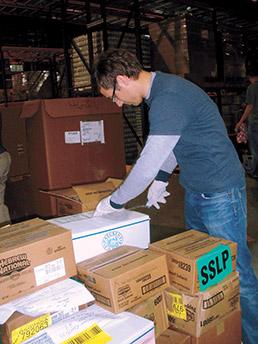 “Everything ITLA members do in the courtroom has to do with making sure people are safe and protected and no one needlessly endangers the life of another. It is what we do for a living,” said last year’s College of Fellows president and Valparaiso attorney Steve Langer. Becoming “backpack buddies” with Gleaners seemed a perfect extension of that mission, he explained.

College of Fellows members are often involved with volunteer agencies and philanthropic organizations – community leadership is among the criteria for the distinguished designation. A project initiated by the college in 2008 motivated members to collectively do more and provided a segue for the lawyers to become involved at Gleaners.

“So many of us are involved in outside work and feel so fortunate; we thought about what we could do to repay the citizens of Indiana,” Langer said.

The fellows decided to help American military serving overseas by putting together holiday care packages. In the project’s first year, more than 50 packages filled with toiletries, food, DVDs, books, and other items were sent to Afghanistan. That number increased to approximately 350 in 2010.

ITLA’s fellows collected more than $50,000 to fund the military care package and backpack efforts, Langer said. From fundraising to assembling the care packages, it has been a true group effort involving ITLA membership and staff. The College of Fellows has made a commitment to make projects for the people of Indiana “part of the fabric” of the organization, he added.

Taking its lead from the College of Fellows, in early May members of the ITLA Young Lawyers Section rolled up their sleeves at Gleaners, helping to package frozen food headed for food pantries and service agencies in the area.

It was just one night, but one night can make a great deal of difference, explained Cindy Hubert, Gleaners president and CEO.

“What people don’t realize is that we distributed 25.3 million pounds of food last year. That equates to 19 million meals,” Hubert said. “We are a staff of 47 and couldn’t do what we do without the almost 80,000 hours of volunteer time given last year.”

Indianapolis lawyer Tara Worthley coordinated efforts for the Young Lawyers project with Gleaners, and she said another date is already being planned.

“We packaged thousands of pounds of food in a couple of hours, but there was still so much more that needed to be done,” Worthley said. “Everyone worked hard and it was constant, but it was nice to get out there and do physical labor and know we are actually feeding people who need it.”

Hubert was glad to hear that the ITLA plans to continue its partnerships with Gleaners. Building a sustainable volunteer base, she said, is crucial to the service agency’s mission.•