Home » End of an IPAC era 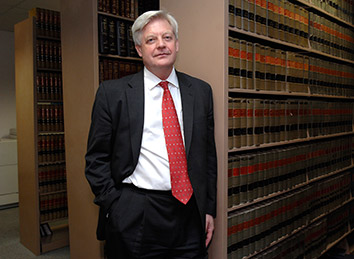 To those on the prosecuting attorney side of Indiana’s legal community, Stephen J. Johnson has long been known as the answer man.

He is the reassuring voice who can point them to the statute, precedent, or practice tip that one might need as a prosecuting attorney. He’s been the legislative and executive branch liaison to Indiana’s 91 county prosecutors and has been the most visible voice for the Indiana Prosecuting Attorneys Council through the years.

But that is about to change. Johnson recently announced he will retire Aug. 1 from his position as IPAC executive director and leave the statewide agency he’s been with for 38 years. He is stepping down at a time when Indiana faces a heated debate about the restructuring of the state’s sentencing policy, and Johnson’s voice will likely be notably missed in the coming year.

“To some extent, he’s irreplaceable,” said Indiana Public Defender Council Director Larry Landis. “Not only because of his institutional memory, but because of that comprehensive knowledge of criminal law. That’s a big loss. Having him in that position has been very critical in shaping criminal justice policy in this state.”

Johnson notified the IPAC governing board of his impending retirement in mid-May and has been gradually informing others since then, he said. Johnson said he’s been considering the change for about two years and this is a personal decision that fits with this time in his life. He said his decision to retire is not a result of controversy he or prosecutors face relating to state toxicology lab errors and legislative debates about Indiana’s sentencing reform that have surfaced in the past several months.

“I wasn’t fired, and I’d actually been asked to stay on,” the 64-year-old Johnson said, referencing tensions about the most recent prosecution issues. “I’ve been thinking about this for a couple years, long before some of these recent issues have come up, and I have my health and am ready for the next stage.”

Admitted to practice in 1973, Johnson began at IPAC on Aug. 1 of that year when it was funded only by grants and not yet a state-funded agency. That change occurred in 1974. At that time, the office was four people in a small room at the Indianapolis law school with two desks and legal books. Johnson started as a research director and has served under two directors – former Porter County Prosecutor David Bahlmann and Richard Good. He succeeded Good as executive director in 1997.

In the early years, Johnson said officials thought he could also help on cases rather than just supplying support for prosecutors, and in the 1970s he assisted on a Bartholomew County triple-murder case that resulted in a hung jury. But that took too much time away from IPAC duties, and the job has since remained simply serving prosecutors with support and training.

Prosecutors statewide say Johnson has always been a trusted and respected representative for them, someone they’ve been able to call in a bind for advice or to get an update on a situation. Longtime prosecutors say he’s been hard-nosed when needed and able to craft a compromise when the situation warranted it.

“It’s amazing to watch his mind work, because he’s like a walking encyclopedia of knowledge on Indiana law and legal history,” said Elkhart County Prosecutor Curtis Hill. “He can recount years of legislative history and the players involved, and that knowledge and credibility that he’s put forward has been a huge benefit to every prosecutor and the entire criminal justice system.”

Former Vanderburgh County Prosecutor Stan Levco said he learned of Johnson’s retirement late last month at a conference in Indianapolis, and said the state has a tough task of finding someone to succeed his longtime friend. He recalls becoming a deputy prosecutor in 1980 after serving as Posey County judge and receiving a letter from Johnson, who’d been with IPAC for years at that point.

“You can’t replace him,” said Levco, who served 20 years as elected county prosecutor and was part of the IPAC governing board that chose Johnson for the executive director position. “Talk about big shoes to fill.”

Through the years, as his IPAC duties have increased and he began serving on more legislative committees, Johnson’s ability to keep in touch with prosecutors the way he once did and actually answer prosecutors’ questions during trials and proceedings has become limited.

“That’s something I miss personally,” he said, noting that prosecutor offices have changed generally in his time and now offer social services and work through specialized courts in ways that didn’t exist when he started his career.

Sentencing reform is an ongoing debate within the Indiana General Assembly, after last year’s study by the Pew Center on the States and the Council of State Governments Justice Center that found Indiana’s prison population had risen 41 percent in the past decade. The study recommended the state take measures to clear low-level offenders out of its prisons to curb the growth and reduce costs, but prosecutors derailed the discussion after insisting the study was flawed and the proposed reform could leave the state being “soft on crime.”

Some now wonder whether Johnson’s departure will influence the discussion this summer and fall, but he’s confident IPAC and prosecutors statewide will provide the information and involvement needed. Johnson said he timed his departure to happen before the 2011 interim study committees start meeting, allowing IPAC time to find a new director.

Rep. Ralph Foley, R-Martinsville, a former Morgan County deputy prosecutor who was elected to the General Assembly in the early 1990s, said Johnson will be sorely missed. He has earned the legislators’ respect and confidence, and it will be difficult to replace him – particularly now as the state continues discussing comprehensive sentencing and penal code reforms.

For his part, Johnson said he might consider independent contracting roles. But he is primarily looking forward to traveling and spending time with family.

Hill, an IPAC member, past president, and board member of IPAC’s sister-organization, the Association of Indiana Prosecutors, said Johnson has been instrumental through the years in trying to speak for the prosecutors and make sure those views are accurately represented to both sides when any issue or legislation is pending.

“This will be a daunting mission for us to take that next step … but that’s life,” he said. “You have iconic figures and it’s tough to imagine life beyond them, but you move on. Steve has worked tirelessly and we don’t want him to go, but with 35 years of service he’s done his bit for queen and country.”

The IPAC governing board has appointed a selection committee to conduct a statewide and national search, Johnson said. The position offers a salary of up to $125,000 depending on experience, and the person selected would be responsible for all IPAC operations as well as legislative lobbying and representing Indiana’s 91 prosecutors. The executive director also acts as a liaison to the governor’s office, law enforcement agencies, and various boards and organizations.

More information about the position and requirements can be found on the IPAC site at http://www.in.gov/ipac. Applications are due July 5 and may be sent to Kathy Falkner, 302 W. Washington St., Room E-205, Indianapolis, IN 46204.•