Home » Terms of Art: From death row to SoHo

Many people experience a flood of memories when asked, “Where were you when John Kennedy was shot?” Considerably fewer can respond when asked where they were when Picasso died. Fewer still get goose bumps from seeing the signature of painter Jean-Michel Basquiat. Enter defense attorney and art dealer Rhonda Long-Sharp, on whose mind such events as Picasso’s death and the Warhol shooting are “indelibly marked.”

Since childhood, Long-Sharp has been an ardent art lover with dreams of building an art collection, “but you couldn’t get out of a bad economic environment with your love for art,” she says. So, she resolved to “become some great street lawyer that was going to even the odds, but the love for art was always there.” As with Basquiat’s tragically short life, she is also a reluctant authority on other lives cut short – those of crime victims and their accused killers.

In law school, Long-Sharp was introduced to capital cases by her mentor. In their first case together, the evidence against the accused was unreliable, and eventually, the charges were dismissed. She recalls that as a hollow “victory,” because by then the accused’s wife had divorced him and taken their children, and the victim’s family was doubly devastated to learn that the man they had believed would account for their loved one’s death was free and that the crime remained unsolved. Long-Sharp says she learned that “we can get it right ultimately, but the cost to people – even when we do get it right – is enormous.”

As chief deputy state public defender, Long-Sharp was instrumental in creating the Capital Unit – a team of lawyers handling capital murder cases. She transitioned to private practice, and with her colleague, Monica Foster, has since handled countless capital cases. Her practice was fraught with typically long hours and interminable research, coupled with the intense stress of trying to save the client’s life. It is grueling work, she explains, to humanize people whom society has deemed monsters. 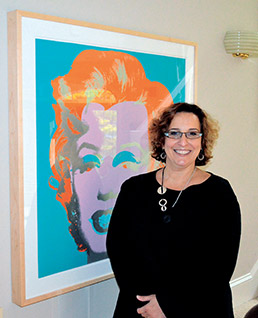 Through constant research and analysis, reading treatises and vetting experts, her job, she said, was “to know more about how that person got to a place in life where they could kill – if they [killed] – than they [knew]. A schizophrenic cannot explain to me why there was acute psychosis that led up to [the killing]. A Vietnam vet with PTSD probably does not know his or her triggers. I have to know all those things [to] explain … how that person got to that place in life, because a jury or a judge needs to know that in order to make a decision.”

It is an unenviable position, standing between your client and death, and that burden can be heavy. “At some point, it just gets to you. You spend days on death row with people who are just sitting there waiting on someone to kill them,” Long-Sharp said. She explains that “[a]s a lawyer, you take someone’s problem and become responsible for seeing that some modicum of justice is done. The more you do it and the more you see things, it’s more difficult to let your mind go. When I couldn’t turn my mind off, art was the thing – God, family, and art.”

For years, Long-Sharp has collected art books, taken art classes, and consumed art history voraciously. She muses that after her marriage (“a union of school loans”), “There was no way that we were going to be buying fine art anytime soon. But I had an art fund.” After dispatching their student loans, Long-Sharp and her husband bought their first art series, which included “this Salvador Dali piece that gave me chills,” she said. “I had in my house something that [he] had touched, [something] that his signature was on. It would stop me in my tracks, I would look at it, and my mind would clear.” 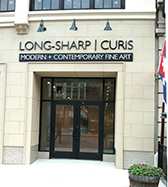 Long-Sharp opened a gallery in Indianapolis and has plans for galleries in Detroit and New York. (Photo submitted)

The serenity was short-lived, however, because doubts arose regarding its authenticity. So, as with her cases, she interviewed experts, conducted exhaustive research, and painstakingly confirmed her suspicions. She recounts that “after some fuss, the Dali is no longer in my home, is no longer for sale anywhere, and I was made whole, as much as one can be …” She “looked at everything suspiciously” after that disillusioning experience, which momentarily robbed her of her refuge.

Long-Sharp began to take a “CSI-approach” to art, analyzing instead of appreciating it. After the shock wore off, she resolved to buy only from “the Ward and June Cleaver of the art business.”

Subsequently, Long-Sharp suffered a serious injury and underwent multiple surgeries, followed by her mother’s death. Admittedly defeated, she remembers how she resisted when her family encouraged her to “Go be June,” and to become the art dealer she was seeking. She relented, and today, Long-Sharp is the proprietor of the flourishing Indy Contemporary and ModernMasters Fine Art & Brokerage companies. Indy Contemporary features the works of Indianapolis-based artists, dubbed “regional masters” by Long-Sharp; and MMFAB archives fine art by Picasso, Warhol, Dali, Basquiat and others. The Long-Sharp-Curis gallery opens in Detroit in mid-September; another gallery is being developed in SoHo, New York; and the Museum of Modern Art recently acquired a Picasso from her and featured the piece in a MoMA publication.

Long-Sharp maintains that similarities can be found between legal practice and being an art dealer. Both, she says, are inherently creative positions. “I handled cases after the client was already on death row, why would I want to do things the same way as [the attorney] before me?” she asks. As an art dealer, she has earned a reputation for the heavy analytical lifting she performs to establish the legitimacy of her pieces. Her evolution is marked by humble beginnings, closely held dreams and dreams deferred, hard work, hope, loss, and fulfillment. Gratifying indeed, she says, and at its worst, “No one dies at the end of the day.”•

Wandini Riggins is an associate in the Indianapolis firm of Lewis Wagner LLP.  She concentrates her practice in the areas of insurance bad faith disputes and insurance coverage defense. She can be reached at [email protected] The recurring feature “Terms of Art,” shines a spotlight on local practitioners and their respective artistic interests. The opinions expressed in this column are the author’s.