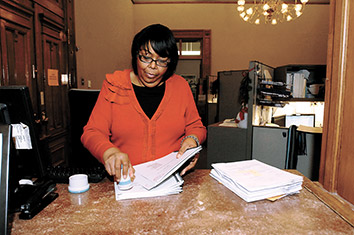 For the first time in Indiana’s history, lawyers and litigants will no longer be able to file appeals the way it has typically been done.

A new Indiana Supreme Court rule amendment that took effect Jan. 1, 2012, requires all appeal notices be filed with the Indiana Appellate Clerk’s Office in Indianapolis – instead of the local jurisdiction – within 30 days of a final judgment.

While some questions remain about how the new process will play out, the legal community does have a two-year grace period before parties lose the right to appeal by not filing the documentation in the correct place.

“From a foundational level, this is the biggest change we’ve ever seen on how the appeals process gets started,” said Indianapolis attorney Maggie Smith, immediate past chair of the Indiana State Bar Association’s Appellate Practice Section and member of the Indiana Supreme Court’s Committee on Rules of Practice and Procedure. “We’re at a point we haven’t seen before, and there’s some open questions about how this will all work.”

The Indiana Supreme Court in September issued an order amending Indiana Appellate Procedure Rule 9 on the filing of a notice of appeal. Historically, attorneys would file a brief notice of appeal form in the local jurisdiction where a final judgment was issued and serve notice on the appellate clerk’s office to start the process.

In studying this rule change, Maggie Smith said some significant problems were discovered. Although the existing rules said a party was supposed to file in the trial court and serve a copy on the appellate court to allow for monitoring of that case to begin, it wasn’t working that way in practice. In about 30 percent of cases, the appellant wasn’t serving the Court of Appeals notice of the appeal, even though the other parties and trial court were already sending the case records to the appellate level.

It was also discovered that some trial courts in Indiana were denying a party’s notice of appeal or dismissing the appeal outright when they didn’t have that authority, Maggie Smith said. The ISBA Appellate Practice Section reported this was not an uncommon practice, she added.

In addition to changing where the notice is filed, the revised rule requires that the notice of appeal contain information such as the names of the parties and counsel; trial information; the date and title of the judgment or order appealed; the date on which any motion to correct error was denied or deemed denied; the basis for appellate jurisdiction; preparation of the clerk’s record; transcript preparation; whether all or any portion of the court records were sealed or excluded from public access by court order; and whether the appellant is willing to participate in alternative dispute resolution.

Unless the notice of appeal is timely filed, the right to appeal will be forfeited. A two–year grace period is in effect until Jan. 1, 2014, for an appellant that timely files the appeal notice with the trial court clerk or administrative agency instead of the state appellate clerk’s office as required.

Appellate Clerk Kevin Smith says these new notices of appeal won’t be subject to the notice of defect process, and they’ll be forwarded to the Court of Appeals without review by the clerk’s office. He said about 15 to 20 percent of defects in the past have dealt with appellant case summaries from attorneys and pro se litigants.

“Attorneys shouldn’t be thinking we’re going to be operating as gatekeepers to catch non-substantive defects, as we have before,” he said. “We think this will free up our case managers to file more paper because they won’t be reviewing mistakes.”

But questions remain about whether the grace period extends to the other rule revisions, such as the content of the notice. Some wonder if the appeal is forfeited if an attorney or party files in the correct place, but doesn’t include the correct materials.

Big firm attorneys say they’re changing the language and process used for how they file appeals to comply with the new party listings that now must be included. Smaller firms and solo practitioners who don’t file as many appeals say they’re more concerned about the amount of work that might go into preparing an appellate notice within those 30 days rather than the additional months they’d have to prepare them under the former rules.

“Most significant isn’t necessarily where one files, but the nature of the appeal,” said Bloomington appellate attorney Karen Wyle. “This new process has engulfed and replaced the appellate case summary and makes it much more complicated.”

Wyle said the process has traditionally been equivalent to telling the trial court clerk one’s appealing the case, so the county will need to start preparing the docket and record. She’s walked people through the process pro se before, but now Wyle worries this change could limit the number of self-represented litigants.

“This makes me nervous,” she said. “This means you have to know your way around to get the right documents and be able to know what they mean. It’s more work sooner, especially when someone calls me at the last-minute with only a couple days left before the deadline.”

To comply with a 30-day deadline, Wyle predicts some attorneys might have to take an appeal and then rework any retainer fee agreement so that they have the ability to later withdraw if they learn the case might not be a viable appeal.

Addressing some of the concerns, Maggie Smith said while the notice may look like it is more work up front, she said it is about 20 percent of what had been required before.

“That’s the tension between making rule changes. You can sit back here and theoretically say, if you’re an appellate attorney, you need to know the rules governing the practice, just like if you’re going into a local court before you go into the court.

“Attorneys don’t operate that way, and they go off past experiences. That’s likely no longer good (enough) for what the courts require. But if someone doesn’t open the rule book or hasn’t attended CLE in four years, those practitioners are going to find themselves in trouble on several fronts. More people will probably learn about this by doing it wrong, by getting a letter from the Court of Appeals. At least for the first two years, you won’t have the appeal dismissed,” she said.

The ISBA Appellate Practice Section plans to travel statewide during the next year offering free CLE to anyone who wants to know more about the rule change. Maggie Smith also said the ISBA plans to hold educational sessions for court reporters, court clerks and trial judges to learn more about the changes.•