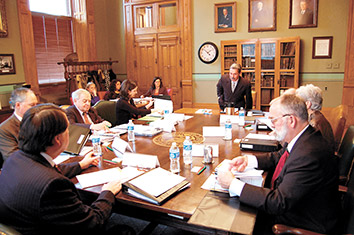 The attorney Gov. Mitch Daniels eventually chooses to become Indiana’s next Supreme Court justice will have come from a pool of applicants that was fairly representative of the state’s population. The question remains whether the new justice will change the demographics of the high court. Indiana’s justices are all men: four Caucasian and one African-American.

Fifteen people applied to be next Indiana justice, but only seven remain in the running for the position. The demographics of the original applicant pool and the semi-finalists group don’t match up exactly to the number of minorities and women in Indiana, but the groups came pretty close.

Eight men and seven women applied for the judicial seat opening when Chief Justice Randall T. Shepard retires March 4. According to census figures from 2010, women make up the majority in Indiana – but not by much. Women outnumber men by less than two percent.

Of the 15 initial applicants, only two – or 13 percent – are minorities. Non-Caucasians make up nearly 16 percent of the Indiana population, according to census data. The percentages didn’t change much with the makeup of the seven semi-finalists: One minority remains in the group – which translates to 14 percent of the applicant pool.

The percentage of women represented in the semi-finalist group decreased to 43 percent.

The analysis becomes murky when trying to compare the applicants’ demographics to the Indiana legal community. Although the courts ask for attorneys’ gender and race during registration, that information is not required. Myra Selby, chair of the Supreme Court’s Commission on Race and Gender Fairness, said the commission has only been asking for that information for about three years. The place to fill in one’s race and gender is on the Indiana bar card.

The first couple of years the information was on the card, it was in small print and on the back, so many attorneys may have missed it, Selby said. The questions have been moved recently to a more prominent position on the card, but she isn’t sure yet if it will result in more people providing that information.

According to the Indiana Roll of Attorneys, there are 17,605 lawyers who are admitted to practice and in good standing in the state. Data from the Roll of Attorneys and the Indiana Supreme Court vary on racial and gender makeup of Indiana’s legal profession, but both show that the number of men who practice in Indiana is around double that of women. According to data from both sources, the majority of people listed Caucasian as their race, followed by African-American, Hispanic/Latino, and Asian-American. A handful of people listed “other” under race.

The Indiana State Bar Association’s Diversity Committee and the Commission on Race and Gender Fairness are tackling issues involving women and minorities, but neither have programs in place to encourage minorities to apply for appellate judicial positions. Selby said it’s certainly an idea worth exploring in Indiana as she’s seen efforts in other states that have been well met and supported by the bench and bar.

Attorney John O. Feighner, who served on the Indiana Judicial Nominating Commission from 2003-2005 and 2009-2011, said his goal when selecting the next appellate judge or justice was to have a diverse group of people that would allow the commission to pick the best three candidates to send to the governor’s office.

“We’ve made a lot of progress to try and seek out many diverse applicants for the Court of Appeals and Supreme Court for the commission to consider. The court has made extraordinary efforts through the Internet and documenting the process … to hopefully encourage everyone to know it’s an open, merit-based selection process,” he said.

Feighner also pointed out that the commission has sent a diverse applicant trio to the governor to select from in recent years. At least one woman has been included as a finalist for the Indiana Court of Appeals vacancies in 2007 and 2008, and a minority was a finalist for the 2008 opening. Dubois Superior Judge Elaine Brown was chosen to fill the position in 2008; Marion Superior Judge Cale Bradford was selected in 2007. Both judges are Caucasian.

When it came time to select Supreme Court Justice Theodore Boehm’s replacement in 2010, the governor had three Caucasians – including a woman – to choose from. He picked Boone Circuit Judge Steven David.

Since 1985, the commission has interviewed candidates to fill eight vacancies on the Supreme Court. At least one woman has been named a finalist in six of those selection processes, with Selby being selected in 1994. Both she and current Justice Robert Rucker have been the only minorities on the high court, and Selby has been the only female justice.

Sharon Murphy, chair of the Diversity Committee for the Indiana State Bar Association, believes Indiana needs to be more cognizant of the value of diversity and the richness that it provides to everyone when it’s accepted and incorporated.

“If we have a judiciary that represents the population, you’re likely to get more people who see the judiciary – in whatever capacity – who realize they can be a part of the legal community,” she said.

Selby would rather not focus on the fact that Indiana is just one of three states to not have a sitting female justice, and instead look at the goal of having the court reflect the state in which it sits.

“There are many important qualities and qualifications that go into being an appellate court judge,” she said. “I don’t think any one automatically vaults to the top over another, but I do continue to believe that the court is certainly enhanced by having a voice that is different in whatever respects from everyone else, so that every voice contributes to the whole.”•