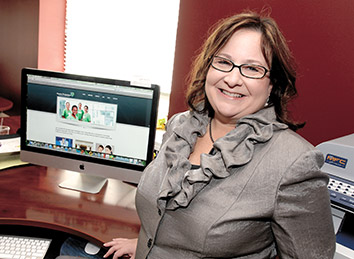 Attorney Lorie Brown says nurses may not understand the many rules that affect their licenses. A mistake on the job or failure to disclose a prior disciplinary action – even something as innocuous as a reprimand for being tardy – could lead to suspension or revocation of their licenses.

Brown was a nurse for 12 years before becoming a lawyer. Now, she hopes to help nurses avoid some of the common mistakes that could land them in litigation.

“Ultimately, I want to be a voice for nurses,” Brown said, adding that in the health care industry, nurses are “80 percent of the workforce but have zero percent of the power.”

Brown used to represent nurses in hearings before the state nursing board, but she quickly realized that many nurses cannot afford to hire an attorney. So two years ago, she created the Nurse Protection Association. Members pay a fee – between $15 and $30 monthly or $147 to $297 yearly, depending on their current professional status – which goes into a fund that enables Brown to offer legal advice to all members without charging a retainer. The association’s approximately 100 members share equally in paying for legal services.

Between Jan. 1 and Feb. 2, Brown said 32 complaints against nurses had already been filed with the Office of the Indiana Attorney General.

In the past, nurses primarily ran into trouble due to misappropriating medication, Brown said. And a quick glance at nurse complaints on the Indiana Professional Licensing Board’s webpage shows that trend has continued. But often, Brown also finds that nurses make mistakes when filling out applications to renew their licenses.

“Nurses don’t understand the laws that regulate their practice. For example, on the license renewal form the nurse has to fill out every two years, a question specifically says: Have you been disciplined and terminated in your capacity as a registered nurse in the past two years,” she said. Answering that incorrectly constitutes material misrepresentation, Brown said.

Other problems may arise when nursing staffs are stretched too thin to appropriately meet the needs of patients.

Wilson Kehoe Winingham attorney Kelly Scanlan was a nurse before she became an attorney, and she said one of the hardest parts of her job in health care was not being able to count on having the proper resources.

She thought nurses were being asked “to do more with less” and that patients – and nurses’ licenses – could be in jeopardy as a result. When she became an attorney, she realized that hunch was correct.

“Working under short-staffed conditions or maybe not having the supplies you need all the time is dangerous,” Scanlan said. “What I realized is that nurses aren’t really focused on protecting their licenses – they are focused on caring for their patients and doing more with less.”

Staffing shortages also forced nurses to take on a lot of administrative work, Scanlan said. She saw the focus shift from patients to paperwork, as harried nurses tried to communicate from shift to shift what each patient needed.

“I don’t know if anybody ever asked me if mom was bonding with baby,” she said. “Good bonding and patient care between patient and nurse really gets lost in the shuffle when you have to keep up with all of that.”

Attorney Lara Engelking is also a former nurse. She is managing partner of Engelking Law Group and is the director of health care litigation services for Caitlin Morgan Insurance Services. In that role, she has become familiar with problems inherent in some nursing homes.

“Sometimes, regulatory agencies cite facilities for things that affect a particular nurse, and then she needs some type of licensure counseling,” Engelking said. “Nurses definitely need to be conscious of the environment they’re working in.”

Scanlan said that in any work environment where nurses struggle with demands caused by inadequate staffing, they must be especially vigilant.

“I think when it comes to some of these things that require corner-cutting, nurses say, I just don’t have any choice,” she said.

The professions of nursing and law share some similarities, and that’s why Scanlan, Brown and Engelking easily transitioned from one occupation to the other.

Scanlan said people depend on nurses and attorneys to help guide them through unfamiliar situations.

“Just the knowledge helps put people at ease so much, and that’s true in nursing and in being at attorney,” she said.

The two professions also can involve stressful situations that contribute to substance abuse problems, which may in turn lead to disciplinary actions for nurses or attorneys. Just like the Judges and Lawyers Assistance Program helps lawyers handle problems with addiction, the Indiana State Nurses Assistance Program can help nurses regain control of their lives so they can continue working.

“Nurses suffer from stress and burnout just like attorneys do,” Brown said. Unlike JLAP, however, she said ISNAP’s focus is solely on substance abuse. She would like to see more efforts to help nurses with psychological concerns.

Brown hopes that by providing information to members of the Nurse Protection Association, she can help them avoid some of the pitfalls of the profession. Her website features articles and news that she feels nurses need to know, and will soon feature interactive user forums, where nurses can engage in discussion.

“Everybody knows a nurse, and nurses are the most trusted profession, so if we can get the word out to help them, that’s what I want,” Brown said.•