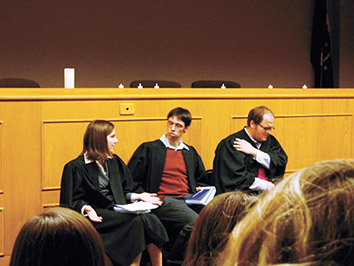 At the end of the 2011 spring semester, the Student Bar Association at Indiana University Maurer School of Law invited Professor Ryan Scott to give the Last Lecture. Scott brought a keyboard and played a song for the students, and he followed his performance with a proposal. In his lecture, Scott made the case that the next school year, the law students should put on a musical. This proposed musical would be the first original musical production in the history of the law school. Scott participated in a student-run musical while attending the University of Minnesota Law School, and he found it to be one of the most rewarding experiences of his law school career.

“Students come to law school with all sorts of talents and interesting backgrounds, and they don’t always have the opportunities to showcase these talents,” Scott said. Giving students the opportunity to write, direct, produce and perform in a production such as this musical was a way to help the students find a means of expressing their creativity and finding some balance between their academic and personal lives.

“If you can’t find balance in your law school career, I think you lose something important,” Scott said.

At the beginning of the 2011 fall semester, an email of interest was circulated to IU law students from Scott to see who might want to participate in the show. A call-out meeting followed. Although about 70 students attended that meeting, only about half ended up participating.

The schedule of tasks for staging the musical was created with the year’s academic schedule in mind. The writing of the musical was completed during the fall, and the performance was to be held in the spring semester so that it would be over before final exams. Drew Tharp, one of the directors of the show, was happy with his decision to participate, even after he decided to take the bar exam early in February.

“There were a few times I was worried about making the commitment,” he said, but “the musical was stress relief. It was a nice break from studying for the bar.”

The students who participated in the musical appreciated the camaraderie and fun it provided. Darrian Campbell, who was both a writer and director of the show, found value in expressing his creativity through writing.

“I’m thankful to have something outside of the rigors of law school to relieve [the] stress,” he said.

Karen Wrenbeck, who was both a producer and an actor in the show, liked how it helped her interact with more of the student body.

“I don’t know that I would have met all these awesome, hilarious 1Ls” if not for her participation in the musical, she said.

“Gary Trotter and the Parody Exception: The Law School Musical,” ran on March 2 and 3 in the law school’s Moot Courtroom. The student-written show, which was a parody of the “Harry Potter” books, followed the exploits of Gary Trotter as he is accepted into Mogwarts, a magical law school.

Opening night was a success. Parodies of both pop songs and show tunes were performed energetically by the show’s cast and musical team, such as “Network ’til the world ends,” a spoof of a Britney Spears song. Jokes comparing law school to high school, and songs about writing briefs and memos and the glamour of living in southern Indiana had the audience laughing in the courtroom and talking at intermission about how funny the show was.

Next year, Campbell said, the students will try to make sure early in the process that more of the school is aware of the musical. Even though about 35 students participated, he said some law students approached him the week leading up to the premiere, saying they wished they had heard about the show earlier so they could have participated. Considering how full the house was both nights, the students might also need a larger venue next year.•