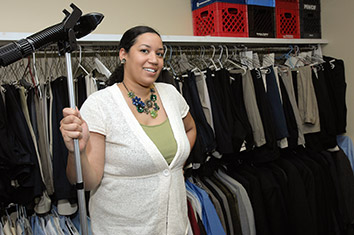 Jurors are supposed to consider only the evidence when deciding the fate of a defendant. But in a close case, when the evidence isn’t exactly black-and-white, jurors may rely on other information to develop an opinion – and they may be unaware they are doing so.

J. Alex Tanford, professor of law and Ralph F. Fuchs Faculty Fellow at Indiana University Maurer School of Law, explained that most of the time jurors base their opinions on the evidence presented at trial. But they also may make judgments about a person based on their past interactions with people.

“A person that takes the stand and is heavily tattooed, the jurors are going to make some assumptions about that,” he said. “I guess the simplest way of thinking about it is a person who has had a bad experience with a lawyer will say all lawyers are criminals, all lawyers are crooks.”

It is human nature to rely on past experiences when forming opinions, and jurors may be making small judgments throughout a trial. That’s why defense attorneys emphasize to clients the importance of dressing appropriately when in the courtroom. 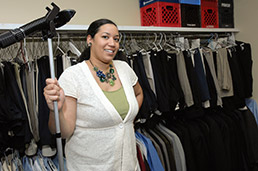 Nikki Tubbs, executive assistant for the Marion County Public Defender Agency, poses for a photo in a room full of business attire collected and maintained by the agency. Defendants may wear outfits from this room for court appearances. (IL Photo/ Perry Reichanadter)

Andrew Borland, a criminal defense attorney with Indianapolis firm Borland & Gaerte, said he once had a client show up for court wearing a basketball jersey. He always hopes juries will focus on the case, but he knows they’re paying attention to what people wear.

Borland said dressing well for court is important, but dressing too well can have downsides, too. If someone is accused of a white collar crime – embezzling money, for example – the defendant would be wise to consider what jurors might infer from his wardrobe.

“Sometimes a polo shirt is better than an Armani suit,” Borland said.

Derrick Carter, associate professor at Valparaiso University Law School, said defense attorneys try to present their client as average. When he was a public defender in Michigan, he kept extra clothes on hand in case clients had no appropriate clothing for court.

In Indianapolis, the Marion County Public Defender Agency has a room full of clothing and accessories for clients who need a little help dressing for court.

Robert Hill, Marion County’s chief public defender, said that if a defendant needs wardrobe help, a paralegal will determine the person’s size and pick out an outfit.

“It’s something that we maintain and monitor on our own,” Hill said, adding that he has contributed some hand-me-down items for the clothing repository, as have other attorneys. “It’s a person’s right to appear in clothes that won’t bias or prejudice a jury.” 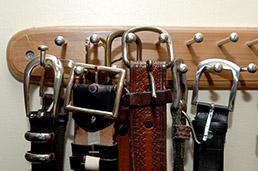 Belts are among the accessories that help defendants appear polished and professional for court. (IL Photo/ Perry Reichanadter)

Andrew Baldwin, of Baldwin Adams & Kamish – a firm with offices in Danville, Franklin and Bloomington – explained how he gauges a defendant’s look for trial.

“I usually tell my client to wear the best clothes they have and let me see them in it first. This is a better approach, because dressing up a guy who is never in a suit and tie can come off very disingenuous. Juries smell these things. It usually looks uncomfortable and odd, then juries may think the guy is a fake,” he said.

A button-down shirt and decent pair of pants would be a better choice for clients who don’t seem at home in a suit, he said.

In 2010, a lawyer for John Ditullio successfully argued that his client’s profane and racially charged tattoos on his neck and his large facial tattoo could have a negative effect on the jury’s perception of his client. The Florida court agreed to pay a cosmetologist to cover the tattoos for trial using an airbrush makeup technique.

The jury found Ditullio guilty of murdering teen Kristofer King and attempted murder for stabbing a neighbor. In a New York Times article that described the cosmetic concealment of Ditullio’s tattoos, King’s mother was reported as saying she was outraged at the court-approved makeover because Ditullio chose to get those tattoos after being arrested.

Lisa Wayne, president of the National Association of Criminal Defense Lawyers, said she’s seen the issue of tattoo concealment come up in other courts.

“I think the bottom line is we know people judge a book by its cover, so that goes to the fundamental fairness process … when and where those tattoos were put on the body is not relevant, unless it’s related to an identification,” she said.

The limits of improving – or significantly altering – a defendant’s appearance is a matter for debate.

Carter recently asked his students: Is it OK for a defendant to change hair color, or conceal or add tattoos? What if hair color was one reason an eyewitness identified a defendant as the perpetrator of a crime? The students struggled with this question, and Carter said one student was literally “saved by the bell” as he pondered an answer.

“It can get complicated – I don’t know if there is a right or wrong answer,” Carter said. “For an attorney, the answer is: It depends. It depends.”

A New York defense attorney reportedly coined the term “nerd defense” to describe his practice of passing out thick-rimmed glasses to defendants to wear at trial. And one study seems to suggest that at least in a controlled experimental setting, eyeglasses may have some influence on jurors.

In 2008, the American Journal of Forensic Psychology published findings of a study conducted by Michael J. Brown, Ernesto Henriquez and Jennifer Groscup, of the State University of New York – College of Oneonta.

One black student and one white student served as models for the experiment. Researchers gave 220 undergraduate students a folder containing a vignette of an armed robbery trial, presenting ambiguous evidence. The folders also contained a photo of one of the models, either wearing glasses or not wearing glasses, and asked students to return a verdict as well as rank other factors like trustworthiness for the person in the photo.

The study found that students returned guilty verdicts for 44 percent of defendants wearing glasses and 56 percent of defendants without glasses. But the researchers said other factors – such as how glasses may make someone seem more intelligent – may have influenced the results. And the race of the student returning the verdict may have influenced how he or she perceived the defendant.

Tanford said he’s seen many studies over the years that research how jurors perceive defendants, but he thinks that the studies are generally limited in real-life application.

“There is a sensible conclusion that can be drawn from all of this, which is that jurors do pay attention to who the witnesses are who are talking to them, and that attention is complicated, not simple. That attention has to do with what they are saying and how they are saying it, and how they appear,” he said. “Then what happens is through a kind of cognitive process, the jurors think of other people they know who behave, dress or act similarly, and they will then tend to assume that the witness is like the other people they know, and therefore are prone to make severe errors in judgment.”

Still, Tanford believes that slapping a pair of glasses on a defendant and expecting a not-guilty verdict might be a mistake. The best bet for a fair trial, he said, is to ensure that a jury is diverse so that not all jurors would have the same experiences, biases or prejudices.

“People have been trying to manipulate the jury system for 200 years, and there’s no evidence anyone has ever succeeded,” he said.•