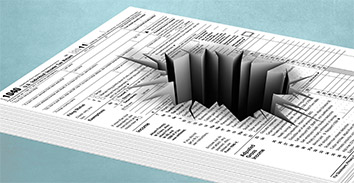 An Indianapolis television station ran a series of reports in May about a “loophole” in the law that allows undocumented immigrants to claim tax credits for children living in other countries. But the reports – which relied on an anonymous tax preparer as a key source – failed to disclose the role of some tax preparers in filing bogus tax returns.

Undocumented immigrants working in the United States are required by law to pay taxes. In order to do that, they must obtain an Individual Tax Identification Number, which is used to file their tax return.

The additional child tax credit may be available to anyone – immigrants or citizens – who had custody of a child for more than half of the previous year, meaning it’s a legally allowable credit for undocumented immigrants.

Wendy Cervantes, vice president for immigration and child rights policy for First Focus in Washington, D.C., said the additional child tax credit is one of the few tangible benefits struggling immigrants can claim for the benefit of their children.

“The real issue at hand here is the tax preparer industry and what could be the abuse on that side, and I think any legislative proposals out there should be targeted at that and not focused on immigrants who are just trying to support their kids,” Cervantes said.

Jamie Andree, director of Indiana Legal Services’ Low-Income Taxpayer Clinic, said understanding various tax exemptions and Internal Revenue Service publications can be challenging, even for someone with her level of experience.

“I’m a native English speaker, I have a law degree, I’ve been a tax lawyer for low-income people for approximately six years, and I have practiced poverty law of some sort for 33 years, and I find these (publications) complicated,” she said. “For example, a child can qualify as a dependant on your tax return but maybe not as the qualifying child for the purpose of child tax credit – so that’s complicated, that’s confusing.”

Sam Pollom, a lawyer and certified public accountant for BCBG Partners in Indianapolis, said that due to the complexity of tax code, it would be difficult – but not impossible – for an average person to know how to fraudulently claim exemptions.

Herb Hernandez, executive director for United Hispanic-Americans in Fort Wayne, is an American citizen and the child of immigrants. He said that his father, who had only a ninth-grade education, never did his own taxes because he found the task too complicated. He believes the same is true for today’s immigrants.

“They are not familiar with the U.S. tax regulations is the first thing, and the second thing is a high percentage of them would have limited English proficiency, so they are not able to read the instructions in the booklet for every form you complete … because of that, they won’t be able to complete their own taxes.”

Even though tax instructions are available in Spanish, he doesn’t think that would help immigrants understand the process. Hernandez said most first-generation immigrants would need to live in the United States for several years before gaining enough familiarity with the tax system to be comfortable filing their own returns. In many ways, their experience may mirror that of a young U.S. citizen who is overwhelmed and confused by the prospect of filing his first tax return. That’s why many immigrants may turn to tax preparers for assistance, and choosing the wrong one could have disastrous results.

The U.S. Department of Justice’s Tax Division has identified several tax preparers in the past decade that targeted immigrants and filed fraudulent returns on their behalf.

In 2006, a federal judge issued a permanent injunction against Angelique Tinder, prohibiting her from preparing tax returns for others. The justice department found Tinder had falsely told immigrants from Bosnia that they could claim as dependents persons in their home country to whom they sent support payments.

In 2009, a jury returned 10 guilty verdicts for Somali citizen and Nebraska resident Siyad Ali, who falsely listed his own foster children as dependants for Sudanese immigrants when filing their tax returns. While his former clients were not prosecuted for the faulty returns, they were assessed additional taxes when the errors were discovered, in some cases owing penalties and interest.

Until recently, almost anyone could set up shop and purport to be a tax preparer – with no training and almost no oversight. In an audit of tax preparers in 2006 and 2008, the General Accounting Office and U.S. Treasury Inspector General for Tax Administration found that several tax preparers made significant errors in preparing returns. The results of the Tax Return Preparer Review – Publication 4832 – can be found on the IRS website.

The results of that review motivated the IRS to push for additional regulation of tax preparers. By the end of 2013, tax preparers who are not attorneys, CPAs or federally licensed “enrolled agents” must pass a basic competency test. Aside from the mistakes made by tax preparers, some may be intentionally misrepresenting their abilities to clients and fudging returns to get more business.

“They, in fact, try to attract lower-income and foreign folks, immigrants, and market to them that they can help them get refunds – we’ll get you a big refund, we’ll take care of you, we speak Spanish,” Pollom said. But those impossibly large refunds – while good for generating business for tax preparers by way of word-of-mouth – could cause clients to end up paying a penalty at some point down the road.

Andree said the people she helps at the taxpayer clinic have often gotten a notice from the IRS that they are being audited or that there are questions about their return.

“We are seeing more and more cases, particularly this spring, where people filed their 2011 tax return, and the IRS held some or all of that refund to determine if they were entitled to credits they had claimed,” she said. As upsetting as that may be for people, she said it’s probably preferable to receiving a refund, spending it and finding out years later that the amount must be repaid.

Tax preparers, too, may unwittingly run afoul of the law, simply because they’re overworked and aren’t asking the right kinds of questions, she said. Even using software to put together a return, tax preparers must ask for additional information that helps them determine what credits to claim for a client.

“And if the taxpayer and tax preparer are speaking two different languages, that complicates things,” Andree said. “Speaking Spanish is different than communicating with someone in Spanish about tax issues.”

Hernandez wishes he had the budget to get the word to immigrants about how to choose a reputable tax preparer. He thinks advertising in newspapers would be an effective way to reach immigrants, whose communities often have their own native-language publications. Otherwise, it’s hard to know how to find first-generation and undocumented immigrants.

“That first generation, they’re in the cracks; you don’t know who they are, and they do not surface unless they have to,” he said. “They surface only to go to work and come home. That’s the challenge – how do you get the information to them?”•

In 2008, the Treasury Inspector General for Tax Administration had its auditors pose as taxpayers and “shopped” 28 unenrolled tax return preparers in a large metropolitan area for its study. The shopped tax return preparers were asked to prepare a federal tax return based on one of five scenarios developed by TIGTA. TIGTA did not consider any of the scenarios to be complex as the tax topics raised by each scenario were specific, straightforward and not dependent on interpretation.

These tax return preparers added or increased deductions without permission and, in some situations, did so after the shopper questioned whether they were entitled to receive the deductions. These six individuals prepared more than 950 tax returns during the 2008 filing season. To review the study, visit: http://www.irs.gov/pub/irs-pdf/p4832.pdf