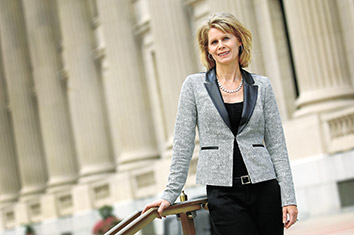 The jury began deliberating after lunch.

Attorney Alice Morical returned to her office on the 44th floor of the Chase Tower in Indianapolis to await the verdict, but she had no idea what the outcome would be. The plaintiff’s case had been well prepared, and the defendant had his motion for a directed verdict denied as well as two witnesses excluded by the judge.

Still, this was an Eighth Amendment case alleging cruel and unusual punishment, so the standard to find in favor of the plaintiff was very high.

Also, her client, plaintiff Robert Holleman, was a convicted murderer serving a life sentence in the Pendleton Correctional Facility.

She described Holleman as “smart and thoughtful.” And while she surmised he had committed a serious crime because of the length of time he had been incarcerated, she did not ask for specifics and did not learn of his history until after the trial.

“It wasn’t relevant to what I was doing,” she said. “It didn’t even come up.”

Morical, a partner at Hoover Hull LLP, was assisting the case pro bono as part of the Civil Trial Assistance Panel program at the U.S. District Court for the Southern District of Indiana. For pro se litigants who want help presenting their cases, the court looks to this program to provide attorneys to aid either during discrete parts of the legal action or assist with the entire process.

Once the court rejected the defendant’s petition for summary judgment and Holleman’s case against the prison physician was headed for trial, the court called upon the CTAP program. Morical agreed to help and met the litigant for the first time when she went to court to be appointed standby counsel.

“I’m fairly liberal,” Morical said. “Through working with business clients on litigation, I have learned things are seldom black and white. I don’t tend to be a very judgmental person. I certainly felt he was entitled to medical care while he was incarcerated.”

Prison is where Holleman prepared and filed his case.

After arriving at the Wabash Valley Correctional Facility Aug. 2, 2006, Holleman submitted health care requests for kidney stone pain and irritable bowel problems. For the kidney stone, the prison doctor, Anwer Jaffri, ordered urine tests and prescribed antibiotics to counter a possible urinary tract infection. Holleman passed the stone Feb. 27, 2007 but did not see Jaffri until April 9, 2007. At that time, the inmate did not receive any treatment.

In his court filings, Holleman alleged the defendant, Jaffri, violated his right under the Eighth Amendment to be free from the imposition of cruel and unusual punishment. He specifically alleged that Jaffri was “deliberately indifferent to his reported kidney stone pain in that Dr. Jaffri provided only delayed and ineffective treatment.”

Holleman filed his complaint in the Southern District in August 2008. He ushered the case through the system on his own.

Morical’s involvement started at a reception in the Birch Bayh Federal Building and U.S. Courthouse July 12, 2012. While attending the portrait unveiling for 7th Circuit Court of Appeals Judge John Tinder, Morical mentioned to U.S. District Judge Jane Magnus-Stinson that she was looking for an opportunity to gain courtroom experience with a jury trial.

In her career, she had presented cases to a judge during bench trials, but she had never faced a federal jury.

Twenty-five seconds later, Magnus-Stinson had a suggestion when she saw a group of staff attorneys from the Southern District of Indiana staff attorney’s office walk through the door.

Lawyers in good standing in the Southern District can volunteer by filling out an application. From that pool, the staff attorney’s office matches the lawyers’ backgrounds and schedules with the cases. The lawyer will always be given the choice of either accepting or declining the assignment.

“We’ve never gotten an order that we could not fulfill,” said Kristine Seufert, staff attorney with the Southern District of Indiana. “There are some that are harder to fill than others.”

Magnus-Stinson has a trial coming up that will use pro bono attorneys. Without CTAP and without lawyers donating their time, she said litigants could stumble over rules of evidence, rules of procedure and, consequently, not get their full due in court.

“We are so grateful for the help,” she said. “The people who are most grateful are the opposing counsel. (The pro bono attorney) makes the whole process go more smoothly.”

For Morical, agreeing to help Holleman required taking a leap of faith. She had not talked to him before she accepted the assignment, and she was stepping in after much of the preparatory work had been done. But this was the opportunity to do something different from what she did every day, and it was exciting to be involved in a jury trial.

On Aug. 1, the trial began. The first day started with Morical reviewing the jury questionnaires and advising Holleman on jury selection. After the jury was seated, Holleman took the stand with Morical conducting the direct examination. Then a witness who had seen Holleman’s distress with the kidney stone testified.

At that point, the defense counsel moved for a directed verdict. Morical expected that and she has already conferred with Holleman that she would present the argument against. However, the judge delayed the motion until the end of day and then denied it once he heard the defense’s reasoning.

Next, Holleman handled the cross examination of Jaffri. The physician wanted to present two witnesses, but the court excluded them. After lunch on the second day, both sides presented their closing arguments and sent the case to the jury.

“It was good practical experience combined with an ability to do pro bono work,” Morical said. “It was a different experience in terms of working with someone who is incarcerated. The way it was different is what made it fun.”

Morical’s experience is typical, both Seufert and Magnus-Stinson said. Attorneys who assist on these cases feel like they have served the client, served the court and gained good experience.

“Since I’ve been here, I’ve not had anyone express that it was a bad experience,” Seufert said. “I think a lot of people are excited to have done it.”

When the jury went into deliberations, Morical thought Holleman could win but the high standards for an Eighth Amendment case and odds for a plaintiff’s verdict did not make her overly confident.

Following an hour-and-a-half of deliberation, the jury returned with a verdict. They found for the plaintiff and awarded compensatory damages in the amount of $15,000.

Reflecting on the trial, Morical remembered Holleman telling her he wanted the physician to know patients could not be treated badly. She said she is pleased to have been able to help him get that outcome.•