By Cassandra A. Bentley

On September 14, 2012, the Marion County Bar Association hosted a retirement dinner in honor of Judge Carr L. Darden, who retired as a full-time appellate judge from the Indiana Court of Appeals on his 75th birthday, July 21, 2012. The event was held at the downtown Indianapolis Marriott and included dinner, musical entertainment and remarks from several individuals to whom Judge Darden has served as a colleague, mentor, family member and friend.

The dinner was attended by more than 230 guests, including judges and attorneys from the Indiana legal community, as well as many of Judge Darden’s family and friends. Proceeds from the dinner will benefit the Judge Carr L. Darden and Mrs. Lundy Darden Public Sector Legal Education Scholarship Fund, a recently established scholarship at Judge Darden’s alma mater, the Indiana University Robert H. McKinney School of Law in Indianapolis. 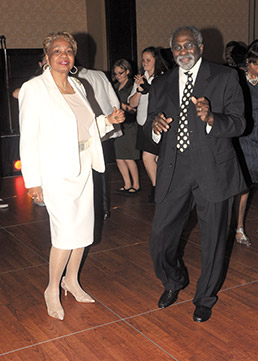 Lundy Darden dances with her husband, Judge Carr Darden, at the retirement dinner held in his honor by the Marion County Bar Association Sept. 14, 2012. (Photo/James Carey)

Masters of ceremony for the celebration were the Hon. Judge Tanya Walton-Pratt, U.S. District Court for the Southern District of Indiana, and her husband, attorney Marcel A. Pratt Jr. Several speakers gave remarks about the impact that Judge Darden has made in the Indianapolis legal community and beyond, including fellow Indiana Court of Appeals judge, the Hon. James Kirsch; past president of the Indiana State Bar Association, Roderick Morgan; president of the Indianapolis Bar Association, Scott Chinn; attorney Wandini Riggins, former law clerk for Judge Darden; daughter Bellary Darden-Davis; and past chair of the MCBA board of directors Nathaniel Lee. Following dinner and remarks, guests joined Judge Darden in one of his favorite activities, dancing, with music provided by disc jockey Norman Reed, attorney at law. Throughout the evening, guests had the opportunity to record video messages to Judge Darden to express their appreciation and well wishes.

Judge Darden has been a valuable member of the Indianapolis legal community for over 40 years. He was named to the Court of Appeals by Gov. Evan Bayh in October 1994, and was only the second African-American to serve on that court. Judge Darden formerly served as a presiding judge in the Marion Superior Court and the Marion Municipal Court systems. He also served as the chief deputy state public defender of Indiana. Following his retirement, Judge Darden was appointed senior judge on the Court of Appeals by the Indiana Supreme Court on July 24, 2012.

Judge Darden is a lifetime member of the MCBA, the National Bar Association, and the National Association for the Advancement of Colored People. He is also a member of the American Bar Association, the ISBA, and the IBA, and a Distinguished Senior Fellow of the Indianapolis Bar Foundation. Judge Darden has been honored twice as a Sagamore of the Wabash, Indiana’s highest distinguished citizen award. In July 2012, the Indiana Continuing Legal Education Opportunity Program announced that its summer institute would be renamed the “Carr L. Darden CLEO Summer Intern Program” in his honor.

To give back to the legal community, Judge Darden and his wife of 57 years, Lundy Darden, established the scholarship fund at I.U. McKinney School of Law in July 2012. The scholarship will be awarded to students at the law school who have demonstrated an interest in state and local government and pursuing careers in public service. Donations to the scholarship may be made through the Indiana University Foundation at the I.U. McKinney School of Law, and contributions should be designated to go to the Darden Public Sector Legal Education Scholarship Fund.

Judge Darden has been an invaluable member of the MCBA for several decades. He served as a longtime member of the board of directors and has provided guidance and mentoring to countless young lawyers in the Indianapolis community. He has always had an open door to the members of the bar association and continues to advise the board whenever he is called upon for additional guidance. The MCBA is eternally grateful to Judge Darden for his instrumental role in the growth and development of the organization and its members and wishes him well as he transitions into the next chapter of his legal career.

The MCBA was founded in 1925 as an association for African-American attorneys who, until 1952, were excluded from the ABA and other majority bars. Today, the MCBA continues to serve as an organization dedicated to addressing the needs of all minority attorneys through mentoring, education, community service and activism, and the furtherance of diversity in the Indianapolis legal community.•

Cassandra A. Bentley is a law clerk for the Hon. Magistrate Judge Mark Dinsmore at the U.S. District Court for the Southern District of Indiana. She also serves on the board of directors of the MCBA and the Judges and Lawyers Assistance Program committee.