“I never thought I would embrace Odyssey, but it’s an amazing tool,” Crane said. “I suppose I’m in my mid-50s, and I don’t like change, but also, when you hear ‘We’re from Indianapolis, we’re here to help you,’ really, historically, that hasn’t panned out so well.”

But Odyssey won Crane over with its capabilities and time-saving records functions. “It seems like every week the JTAC folks are populating a new asset within Odyssey,” he said. “It’s a great product, and I’m thrilled with it. I encourage every court, if they have the ability to convert to Odyssey, to do so.”

Not everyone shares that view.

Elkhart County is the most recent court system to switch to Odyssey, doing so over Labor Day weekend.

“I was against it. There are many problems with the conversion,” Clerk Wendy Hudson said, but she declined to elaborate.

“I’m hearing Odyssey is working quite well in other counties, but I don’t feel it was the right choice for my county. We had a system that was due for an upgrade, and the upgrade would have been much better than Odyssey,” she said.

DePrez acknowledged resistance in some courts.

Meanwhile, she said JTAC is gearing up for its biggest challenge, and has begun work to connect the Marion County court system. DePrez believes in time the system’s benefits, capabilities and reduced costs for localities will increase Odyssey’s acceptance.

“I think it will be a statewide system someday,” she said. “That’s ultimately what makes it so valuable.”•

In the Greek epic “The Odyssey,” Homer’s hero Odysseus takes 10 years to return home after the Trojan War. Indiana’s Odyssey might take longer to reach its goal.

Odyssey, the state-backed court case management system that aims to connect and modernize more than 400 trial courts, is continuing its laborious progress, locality by locality.

State court administration staff has been at it for more than five years, and so far less than half of Indiana’s courts are connected to a system that users widely rave about it, but has been hindered in its implementation by a patchwork of court computer systems and funding uncertainty, among other things.

“If we had a unified court system, we’d be done,” said Mary DePrez. As director and counsel for trial court technology for the Judicial Technology and Automation Committee at the Division of State Court Administration, DePrez oversees installation of Odyssey in courts around the state.

nated one” by transferring to Odyssey, she said.

And then there are the few Indiana courts where clerks have never put dockets into any kind of computer, DePrez said.

Retired Justice Frank Sullivan Jr. had been the Indiana Supreme Court liaison to JTAC and the court’s leading advocate of Odyssey. He acknowledged, though, that it may never truly be adopted statewide because local court officials must agree to host the system.

“The Indiana Supreme Court was not of a mind to mandate counties adopt Odyssey,” Sullivan said. “Frankly, there’s a list of courts standing in line to get on. … I wasn’t going to get in a fight with somebody about whether there ought to be a mandate.”

Odyssey got under way when an $11 million contract was signed with vendor Tyler Technologies in June 2007. The first courts went live in December of that year. The idea for a statewide computerized case management system dates back to the early 2000s. An earlier project had to be scrapped in 2004 when it was discovered software the state spent millions of dollars to develop wouldn’t be able to provide the functions needed. That led the state to end its deal with Computer Associates in September 2005.

Of the state’s trial courts, 134 in 43 counties have gone on the system, according to JTAC, but only about one-third of countywide court systems are connected. DePrez said about 110 courts are on the waiting list for Odyssey, and more are in the process of signing agreements. Work is being done as staff and resources permit.

Sullivan said progress for Odyssey’s adoption never was intended to be on a particular schedule. He noted that the Odyssey database now contains more than 7 million case files and is approaching 40 percent of the state’s total caseload.

“Given how decentralized our court system is and each of these deployments is kind of a one-off task,” Sullivan said, “I’m very proud of what the JTAC staff has done.

“Given the resources the Supreme Court has available, the rollout has progressed at a highly acceptable rate,” he said. “It’s been a gargantuan task.”

Odyssey is supported largely by case-filing fees, and until 2011, $7 per case went to JTAC for that purpose. The Legislature cut that to less than $5 in 2011, but Sullivan said grant money partially made up the difference.

The change to Odyssey has to take place without disrupting the work of courts, and JTAC staff is responsible for managing that change. A court switching over has to have the hardware and Internet requirements to support Odyssey, and those analyses are done by JTAC, as is an assessment of each court’s business practices before a conversion begins.

JTAC employs a team of about 15 staff and/or contractors for each transition from a court’s current system. The tech crews must translate and move all the court’s existing computerized case files into Odyssey and train court personnel and others who will use the system. 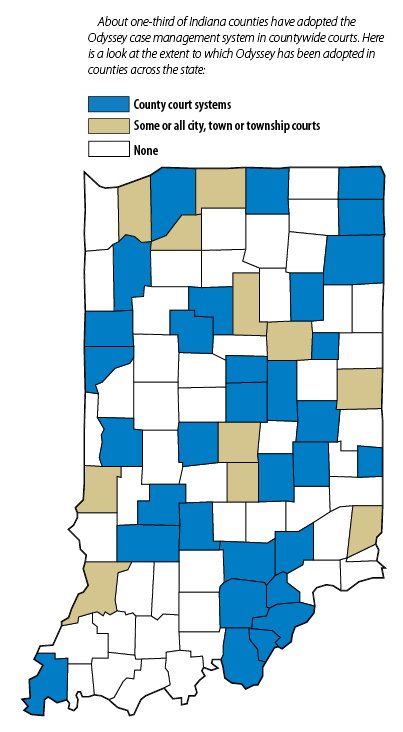 Courts typically bear no direct cost for the installation, DePrez said, and they save money when they no longer have to pay for maintenance or licensing on their old systems.

Odyssey is the state’s technology of choice for managing chronological case summaries. Sullivan said it’s among the best and most adaptable systems of its kind in the nation.

It connects courts with one another, reduces duplication of data entry, and has an online interface – mycase.in.gov – that allows public access to court records. It also has functionalities that can share data with agencies such as law enforcement, local probation offices, the Bureau of Motor Vehicles, Department of Child Services and others.

The system’s capabilities continue to expand through other JTAC initiatives that include e-tickets in which a police officer’s electronic citation data can populate forms in multiple systems.

“From a judge’s perspective, I love the forms feature,” said Henry Circuit Judge Mary Willis. “Most of the commonly used forms are interfaced, and once I pull up a case, let’s say I need a transfer order on a criminal case, the system populates that form” in required data fields. The judge merely has to write orders particular to the case, she said.

Willis said that when the courthouse in New Castle went live with Odyssey on Jan. 1, there were few concerns other than those that accompany change from the familiar. But then-Prosecutor Kit Crane had reservations, particularly when the system went live and dates of events showed up in error. JTAC quickly fixed the bug, and Crane said he had a change of heart after he was appointed in June to fill the judicial vacancy in Henry Circuit Court 2.