A proposal before the Indiana Supreme Court could change the landscape for those who provide civil legal aid and pro bono service.

“In my opinion, what is needed in the state when you’re dealing with access to justice issues is a forum where all these different entities have an understanding of what the other entities are doing, what their purpose is, and what steps they’re taking to address certain problems,” Allen Superior Judge David Avery said.

Along with being vice chair of the Indiana Pro Bono Commission, Avery serves on a task force that developed a final recommendation for an Access to Justice Commission that the Indiana Supreme Court has been considering since July.

The proposal sprang from a workshop this year that brought together representatives of pro bono organizations, self-represented litigants, interpreters and other stakeholders. It built upon work done beginning in 2008 that examined the statewide need for civil legal services for the poor and disadvantaged – a need that has only grown as the economy worsened and resources dwindled.

By design, the commission proposed to the Supreme Court would not pre-empt organizations that currently provide services, Avery and others said. There was sensitivity to that because an unsuccessful proposal a couple of years ago would have shifted some of the Pro Bono Commission’s duties to the Access to Justice Commission that had been considered at that time.

This time, the approach is different.

“There are going to be all kinds of gaps, and the question is, what do you do about the gaps?” Metzger said. “There’s an obvious need to figure out a way to administer those resources and bring those stakeholders together. We all have an obligation to manage our resources efficiently so we can be productive.”

The commission proposal aims to take a holistic picture of the state’s legal aid providers and those that work to ensure access to justice, but the panel would stop short of having a funding mechanism. Avery said removing funding decisions from the proposed commission would allow it to focus on policy and decision-making. He said the proposed makeup of the commission would raise awareness of legal aid needs and rally wider support. 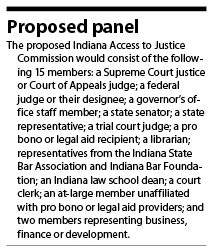 Indiana Chief Justice Brent Dickson told Indiana Lawyer that the proposal was still under consideration and he could not say when the court might act.

She said she and her colleagues are hopeful that a new commission might address statewide needs, but they’re also cautious. “We are waiting to work through who’s going to be in charge and who gets what,” Roth said. “It’s very much an evolving situation.”

One of the first orders of business outlined for the proposed commission would be to develop a strategic plan for access to and delivery of legal services within a year of the commission’s initial meeting.

Roth said there are needs that will take statewide solutions, but the jury is out on whether the proposed commission might be the vehicle. Access to justice is unequal in rural counties. Clients in need in Crawford and Orange counties are an example.

“We had to make a very unpleasant decision that we simply could not serve them,” she said. There are few available attorneys in those counties, and the cost of gas means fewer lawyers are willing to volunteer to commute to English or Paoli from New Albany or Jeffersonville, for instance. Plus, those more populous areas already had more demand than the agency could meet, she explained.

Funding to Roth’s pro bono district is down as much as 35 percent since 2008. “I understand funding will remain stable for 2013,” she said. “We are so beaten down that we say, ‘that’s wonderful.’”

Indiana Bar Foundation Executive Director Charles Dunlap said creating a commission would bring together policymakers as well as those not directly involved in legal services. Doing so, he believes, would raise awareness of the needs beyond those who already practice in the fields. A commission with a broad range of membership also would be able to rally for another level of resources, he said, whether legislatively or through private foundations and funders.

The bar foundation is taking a wait-and-see approach before filling a key vacant position, that of executive director of the Pro Bono Commission, which allocates funds from interest on lawyer trust accounts to the state’s 12 pro bono districts, according to Dunlap. Former director Monica Fennell in September took a position as pro bono director at Faegre Baker Daniels LLP.

Dunlap said that position likely won’t be filled before the Supreme Court gives direction on the proposal. The position and its responsibilities could change based on what the court does.

Roth said she hopes a statewide retreat later this month will give providers more direction.

“This is a really bad time for all funders,” Metzger said, noting his agency’s funding has declined from about $9 million to about $7.1 million in two years, forcing a retrenchment. “There are a whole variety of reasons why (the proposed commission) makes sense.”

Dunlap is encouraged by the broad consensus in favor of the proposal that emerged from the legal aid community. “Hopefully it’s sort of a preview of coming attractions, these folks working together.”•