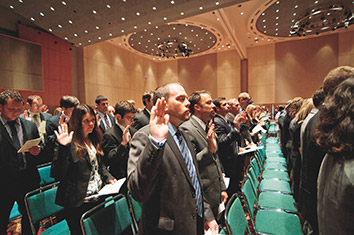 The details of the day fade like all memories do, but attorneys do not forget the pomp, the circumstance and the feeling of going through the Indiana Supreme Court Admission Ceremony and taking the oaths of the courts.

Twice a year, once in May and again in October, the Indiana Supreme Court holds a session to administer the oath to new attorneys. The session has evolved from the group of applicants being crowded into a courtroom to a grand ceremony complete with a processional of all the new lawyers, inductions and remarks by judges from the state court and federal circuit and, of course, the oath for the state courts as well as the oaths for the U.S. District Court’s Southern and Northern Indiana districts.

Retired Indiana Chief Justice Randall Shepard said the pageantry serves two functions. One, it congratulates the individuals who have passed the bar exam and, two, it reminds everybody that what lawyers are allowed to do is a real privilege as well as important in the lives of citizens.

“I think it emphasizes the importance that the system of the judiciary represents in American society,” he said.

TaKeena Thompson, associate at Cohen & Malad LLP, remembers a flood of feelings from her admission ceremony in October 2009. She was excited to recognize applicants who sat around her during the bar exam who were now standing next to her in the processional line. She was a little anxious about introducing herself to the courts, yet she was proud to take the oath and become an attorney.

She also remembers her mother traveling from San Antonio, Texas, to be there. Knowing her mom wanted a photo to commemorate the special event, Thompson obliged by stepping from the line, putting her hand on her hip and flashing a big smile.

“It meant just as much to her as it did to me,” Thompson said. “I think we both felt the same way about that experience.”

In 1985, she traveled from her small town of 1,200 in Southern Illinois to Springfield to be admitted to the state court. There she was crunched behind a filing cabinet in “some gray office” where she could only hear, not see, the individual administering the oath.

A few months later, taking the oath for the Indiana courts, she stood in the Scottish Rite Cathedral in Indianapolis. All the Supreme Court justices were there, making eloquent speeches and giving a warm welcome to the applicants.

“It was just a different experience,” Orzeske said. “Going from something that took place in a small office to a real ceremony really made it feel like you were entering the bar.” She pointed out the Illinois bar hosts a more ceremonial induction that includes dignitaries from the court and bar associations.

Prior to the late 1930s, Indiana residents who wanted to practice law just went to the local court and asked to be admitted to the bar, according to Shepard. They were then sent to be examined by other attorneys in the community who would decide whether or not to recommend admission.

Around 1938, the Supreme Court instituted the bar exam and, Shepard believes, as a matter of convenience all who passed the test at the same time where sworn in together. The courtroom was the natural location for the administration of the oath but by the 1960s, the number of attorneys filled the room and family members were relegated to standing in the corridor.

Some time in the early 1980s, the ceremony was moved to the Scottish Rite Cathedral where it remained for 25 years. During this period, the oaths from the federal courts were added, a development that Shepard called a major innovation that has worked extraordinarily well.

Before that change, the applicants were walked down the street after they took the state court oath and went to the federal courthouse in Indianapolis for the oath to the Southern District. Anyone wanting admission to the Northern District had to make their own arrangements.

Judge Robert Miller Jr., of the U.S. District Court for the Northern District of Indiana, remembered the federal courts setting aside a few

minutes at the beginning of either the morning or afternoon session to swear in a new lawyer. The process began with an attorney making a motion to present the new lawyer to the court and saying a few nice things about that person. Then the judge would administer the oath.

Miller said after he swore in a new attorney, he would step down from the bench and shake hands before returning to his seat and tackling the court docket.

Missing from the District courts were the families. Thompson wanted her mom at the ceremony because she heard for years Thompson’s dream of becoming a lawyer, and later about the demands of law school. Her mother also listened while Thompson described the stress of the bar exam and the worry she did not pass.

Orzeske’s parents made the trip to Springfield as well as Indianapolis to see her admitted to the bar. In Illinois, they also stood among the file cabinets because she was the first of her sisters to continue her education after getting a bachelor’s degree.

“I think it’s a ceremony for families for the sacrifices they’re made as well as a reward for the lawyers for having passed the bar,” Orzeske said.

Reynold Berry attended the October 2005 ceremony as a new lawyer and returned in October 2012 to represent the Indiana State Bar Association’s Young Lawyers Section. More than a celebration, Berry, who is now section chair, said the speeches, the motions for admission, and the oaths reflect the gravity of being an attorney.

That observation was echoed by Bradley Skolnik, executive director of the Indiana State Board of Law Examiners.

“I think it is a very important moment for the profession as we welcome new attorneys,” Skolnik said. “It is meant not only to celebrate achieving admission to the bar but also to impress upon the applicants the magnitude of responsibility they are undertaking by becoming a lawyer.”

The participating judges from the Supreme Court, Indiana Court of Appeals and the U.S. District courts are not immune to the rush of feeling that comes with the ceremony. Shepard said the event is as moving for the judges as for the new lawyers, reminding them of how grateful they are for having had the opportunity to become attorneys.

Moreover, the day’s momentousness may come to mean more as an attorney builds a career, Miller and Orzeske said. As the lawyers go into practice, they will encounter unpleasant situations and this memory could not only counterbalance the cynicism, but also prevent them from taking a misstep in a weak moment.

“The one message that this sends is when you walk into that beautiful courtroom, suddenly you realize people are taking you seriously,” Miller said. •