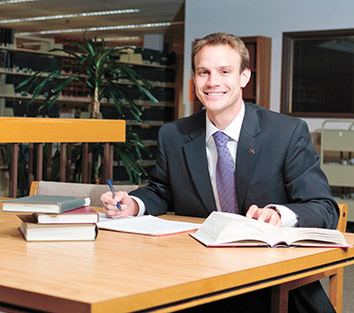 Valparaiso law student Bryan Rogers is taking a cue from prior generations of Indiana attorneys who have made the choice to belong to the American Bar Association. Like many Hoosier lawyers have done, he plans to become active in the national organization’s Young Lawyers Division after he graduates. And, like many lawyers he emulates are doing, he is taking a leadership role at the ABA, even while still a student.

Like their colleagues from around the country and even around the world, Hoosier lawyers have always joined and supported the American Bar Association. They have served on committees, chaired sections, participated in seminars and attended meetings.

Rogers, a third-year law student at Valparaiso University Law School, was introduced to the organization during his first year of law school and, in August, became the Law Student Division’s representative on the ABA Board of Governors. He provides the voice and the views of law students to the ABA’s top governing body.

His work for the ABA is in addition to his studies and his externship with the U.S. District Court of the Northern District of Illinois as well as his part-time clerkship with the Lake County courts. Acknowledging he is an “extremely busy student,” Rogers said his involvement with the association is “very important” to his career.

There, again, the soon-to-be lawyer is a reflection of Indiana attorneys in his dedication to the organization and his belief that membership has great professional benefits.

Jim Dimos, of Frost Brown Todd LLC, sees Indiana lawyers becoming more involved with the ABA. Certainly the size of the contingent from Indiana pales in comparison to the hundreds of lawyers from California or New York who are members, but, he said, Indiana has a significant level of participation especially considering the size of the bar.

In addition, many of these lawyers are assuming leadership posts. Pulling out the ABA Leadership Directory, or what is commonly called the “Red Book,” Dimos flipped to the Indiana section and counted 64 Indiana attorneys who are serving as chairs and section heads.

He is among those leaders, having been a member of the House of Delegates since 1995 and currently serving on the 38-member Board of Governors as well as the chair of the finance committee, overseeing the association’s annual budget of $107 million.

“I think it’s worth it,” Dimos said of his own participation in the ABA. “It has made me a better lawyer. I am more knowledgeable about things that affect my clients which I do not get in direct practice.”

As an example of Indiana’s growing importance at the national level, Dimos pointed to the appointment of retired Indiana Chief Justice Randall Shepard to chair the ABA’s Task Force on the Future of Legal Education.

Numerous other Indiana lawyers are filling non-leadership positions on committees and sections, adding more value to the ABA. These Midwestern lawyers bring common sense and a clear view of the issues that main street lawyers are facing, he said.

Indiana lawyers, Dimos said, are in a position to shape the issues that are important to the association.

The ABA, with nearly 400,000 members, speaks with a credible voice on major issues like human trafficking, cyber security and funding for the justice system. Laurel Bellows, president of the ABA, touts the association as having a strong reputation for researching issues then offering a national perspective.

That broad view helps give credibility to the association and comes from getting input from all attorneys whether they practice in big states or small, in urban areas or rural communities.

“I think it’s tremendously important to have participation by Indiana lawyers,” Bellows said. “I don’t want to talk only with the voice of New York lawyers or California lawyers. We’re a country and the issues we’re dealing with are quite national.”

Don Lundberg, partner at Barnes & Thornburg LLP, is applying the expertise he garnered from his 18-year tenure as the executive secretary of the Indiana Supreme Court Disciplinary Commission to his current appointment on the ABA Standing Committee on Ethics and Professional Responsibility. Working on the committee, he said, gives him the opportunity not only to help author opinions on legal ethics but also to learn something new.

“One thing that gets my juices flowing is just thinking about new and interesting questions,” Lundberg said. “It is energizing to be around people concerned with the basic questions of how lawyers conduct themselves.”

A key component of the association’s work on legal ethics is the Model Rules of Professional Conduct. Although the rules lack teeth – attorneys who act contrary to the code will not face any repercussions – they have become the template which many states have used to write and enforce their own codes governing lawyer behavior.

The template, Lundberg said, is “increasingly important because the practice of law is becoming increasingly cross-jurisdictional.” Lawyers practice across state lines, and having conflicting rules could be confusing and possibly hinder the service to clients.

When Joe O’Connor, partner at Bunger & Robertson in Bloomington, headed into the ABA’s Young Lawyers Division in 1986, joining the national legal organization was almost expected. Every attorney became a member unless he or she had a compelling reason to not join.

O’Connor is currently a member of the ABA Nominating Committee and served on the Board of Governors from 1998 to 2001.

Today, he does not feel that the drive, nationally, to belong to the ABA is as strong as it once was, yet he believes the Indiana contingent is as healthy as it has always been. Hoosier attorneys may have a strong motivation to join and serve the organization because they are accustomed to taking the initiative and participating in their state and local bar associations, in which membership is also voluntary.

Along with having the opportunity to network and built relationships with lawyers from across the country, ABA members also play a role in securing the rule of law, O’Connor said. The association is viewed as having expertise on legal issues and is a force when it lobbies Congress on matters such as salaries, case loads and the appointments of federal judges.

Moreover, the ABA has helped promote the rule of law in emerging democracies, particularly in Eastern European countries, he said. The organization has assisted in writing country’s constitutions and setting up judicial systems.

Most recently, the Board of Governors held a meeting in Puerto Vallarta and spent time sharing insights with the Mexican Bar Association and answering questions about licensing and regulations.

Rogers, who made the trip with Dimos, credits the ABA with enabling him to explore different practice areas and talk to attorneys from around the country about their work. While still deciding which area of law he wants to practice in, he said being a part of the national association has made his search easier.

The benefits he has already reaped from the ABA are why he plans to continue his membership when he finishes law school.

“My biggest hope is that Bryan, myself, Joe and others will continue to reach out and include other colleagues in the state and grow opportunities for participation as well,” he said.•