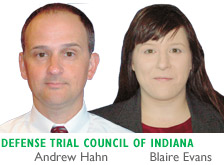 As lawyers, we’ve handled thousands of cases. We see new complaints weekly and draft answers and discovery while managing a full case load. The names of the plaintiffs and defendants blur into file numbers, and the allegations become routine – to us.

To our clients, the complaint and summons they receive will likely be the first such paper they’ve ever seen and, to make matters worse, the jargon contained in the papers makes them almost unintelligible. It is likely the first time they have ever been sued.

The summons may be the first document they’ve ever read commanding them to appear in court. The complaint may be the first time they have ever been accused of being careless or negligent. It is scary, hurtful, humiliating and infuriating, all at the same time. In fact, studies show that lawsuits can cause profound levels of stress and anxiety. The condition sometimes referred to as litigation stress syndrome can cause feelings of isolation, negative self-image, emotional problems, anger and fatigue and can affect relationships with spouses, children, neighbors or colleagues. (Sandra Tunajek, Dealing with Litigation Stress Syndrome, American Association of Nurse Anesthetists News Bulletin, July 2007, at 22-23; Sara C. Charles, Malpractice Litigation and its Impact on Physicians, 23 Current Psychiatric Therapy 173-80 (1986))

Both authors of this article recently had experiences in which our clients have shown us the true emotional impact that litigation can have on a new litigant. Their raw response to the litigation process served as a reminder that we must take a client’s emotional response to litigation into account – partly because it’s the right thing to do as counselors and partly because a failure to recognize the emotional toll of litigation may lead to real consequences during depositions or trial.

Andy recently learned that many defendants bring a heavy weight of anxiety to their first meeting with newly assigned defense counsel. Too often, we approach this meeting in a cavalier manner glossing over the allegations as standard language used by plaintiff’s counsel, saying it’s “nothing personal.”

To your new client, it is personal.

For instance, a new client came in recently to discuss her case. She was scared because the answer was due in two days, so she hired her own lawyer for fear that a judgment would be taken against her. The process was unfamiliar to her, and it took a while to convince her that the court would grant her an additional 30 days, something we take for granted.

As we discussed the complaint, she burst into tears while reading the allegations. Only then did I realize how quickly I had glossed over the allegations of negligence, having seen the same words a thousand times. It was the first time she had read them aloud to herself, that she was negligent in causing a little girl’s injury. It was the first time in her life that she had ever been accused of anything. “I’m not a bad person” she said repeatedly. No matter how many times I told her I knew that, she would hold up the complaint, point to the words, and say, “but they say I am, and the whole world can read this.” This meeting took several hours; not all of them do. But this time it was necessary to alleviate her fear and mistrust of a system with which she was unfamiliar and to help her understand that, just because someone accuses you of something, does not make it true or a reflection of your character.

Blaire had a slightly different experience, in that the client’s emotions weren’t readily apparent until after the verdict. The client was involved in a motor vehicle accident in which two gentlemen claimed that they were severely injured. In closing, we admitted that the jury heard some evidence of fault by our client but asked that they consider the other evidence and assign up to 50 percent fault to the plaintiffs and limit the plaintiffs’ recovery to their emergency room charges.

The jury returned its verdict and did exactly as we requested. I was thrilled. My excitement, admittedly, came from the thrill of good competition. We made an argument, and the jury accepted it. Our client, however, was in tears, and I was baffled. Our client’s own funds were never at issue in the case – she had applicable insurance coverage. It turns out that she wanted badly to have her feelings validated. She wanted the jury to believe her that the accident was not entirely her fault, and she wanted the jury to believe her that the gentlemen were not as injured as they claimed to be. The fact that the jury did believe her was more than she could handle in that moment and her tears flowed. A few days after the trial, she sent co-counsel and me a note thanking us for “being there for her.” Until then, I don’t think that I appreciated how truly vulnerable she’d felt during the trial.

In order to serve our clients effectively, we must recognize that each case is a significant matter for them. When the clients believe that we understand the significance of their cases to them, we enable them to relax and to share their stories with us. If the dialogue is open and comfortable, we may learn helpful facts that we would never have thought to seek. If, however, we fail to recognize the clients’ emotional responses to the litigation, those emotions may build up and present themselves at an inopportune time – such as during deposition or trial testimony. For instance, if counsel doesn’t take the time to learn that the client is offended by the lawsuit, counsel will lose the opportunity to help the client process that anger, and the client may take a sarcastic or rude tone with opposing counsel, which will only hinder negotiation or offend a jury. By helping the client recognize and address emotions early in the process, counsel helps to ensure that the client will be able to participate completely and freely in the defense of the case.•

Andrew Hahn and Blaire Evans are litigation counsel for State Farm in Indianapolis.