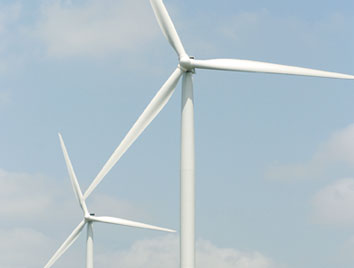 Newton County lawyer Dan Blaney has a blunt reaction to the potential end of a federal subsidy that has enabled the rise of wind energy in his part of the state. “We’re in trouble,” he said.

Blaney has helped Benton County government, landowners and others in northwest Indiana, where the state’s greatest concentration of wind farms has developed with a big impact on the local economy.

But lately, most everything has stopped. Not much wind business is stirring in the Morocco office of Blaney & Walton. “Nobody’s broken any ground or done any construction” on wind turbines in northwest Indiana, he said. “Without that incentive, these wind developers and bankers, they don’t want to get involved.”

In Benton and White counties alone, more than 750 towering turbines are in place across thousands of acres, with a capacity to generate more than 1,000 megawatts of electricity, according to the American Wind Energy Association. That’s sufficient to meet the needs of more than 41,600 homes.

But the federal Renewable Electricity Production Tax Credit for wind energy expires Dec. 31. It provides a federal subsidy of 2.2 cents per kilowatt hour generated for 10 years after a wind turbine is in operation. Most turbines are expected to have a lifespan of at least 30 years.

The looming expiration of the tax credit, meanwhile, is producing a whirlwind of activity at the Wildcat Wind Farm under development north of Elwood in rural Madison and Howard counties. E.ON Climate and Renewables is building the farm, and

communications manager Matt Tulis said the pace of construction is stepped up because the company can only claim the tax credit for turbines that are generating electricity by Dec. 31.

“We’re confident we can get it finished in time,” Tulis said. The $400 million project includes 125 turbines generating up to 200 megawatts of electricity.

But E.ON’s bigger designs for the Wildcat farm are on hold. It had proposed construction of three phases extending across thousands of acres into Tipton and Miami counties. “We are interested in doing more phases in that area. We like the wind resource, we like the transmission availability there,” Tulis said. “The production tax credit will definitely have an influence on future phases.”

That model might change in time, but in the current climate, wind power is facing multiple challenges. “It’s kind of like a perfect storm of bad things,” Solada said, listing the expiration of the tax credit, a downturn in manufacturing, and the emergence of inexpensive and abundant natural gas.

“It’s good for consumers, but for people who generate power, it’s not very good,” she said.

Indiana is among the top 15 states in wind power generation, according to the AWEA, and there appears to be bipartisan consensus, at least among some key lawmakers, to extend the credit. Republican Sen. Charles Grassley of Iowa, the No. 3 state for wind power, has urged renewal of the tax credit that was signed into law in 1992 by President Bill Clinton and later renewed by President George W. Bush.

“I expect we’ll probably find out at the eleventh hour whether the federal subsidies expire or continue,” said Bob Clark, a partner in the environmental group at Taft Stettinius & Hollister LLP in Indianapolis who has worked on wind energy matters.

Indiana Republican Sen. Dan Coats is the lone Hoosier in Congress seated on an energy committee. Spokeswoman Tara DiJulio said, “This is all being looked at in a larger picture with the fiscal cliff package.

“At this time, when it comes to any extension of the credit, (Coats) believes we need to be looking at it as part of reforming the overall tax code,” DiJulio said. “The senator is supportive of alternative and renewable energy, but they must prove themselves to be competitive on their own merits without perpetual federal subsidies.”

Kent Frandsen, an attorney with Parr Richey Obremskey Frandsen & Patterson in Indianapolis, has helped negotiate on behalf of landowners where wind farms were built. He said the expiration of a subsidy was a “theoretical concern” that wouldn’t impact existing farms.

Still, he said the rise of wind power carries complications that should be addressed in leases, and landowners are best served by having numbers on their side to negotiate the best deal and get terms in writing. It also is to the benefit of developers, since they’d prefer not to deal with dozens of leases each with differing terms.

“There are issues that come up that you have to deal with, what you might call after-effects,” Frandsen said. Those range from the impacts of turbines on farming operations to the heavy cranes used to raise the turbines that can crack subterranean drainage tiles.

In the land leases he’s drafted for a group of about 40 landowners in Benton County, he’s tried to address those and other theoretical concerns.

“What happens if the wind company goes out of business 10 or 20 years from now?” he said. “If the government doesn’t continue to subsidize these companies, it seems to me there’s a risk some of these companies will fail, and who will be there to remove them and the six feet of concrete put in the ground to support these turbines?”

To address such concerns, the plant developer agreed with landowners to put money in escrow in case the turbines needed to be removed at a later date, Frandsen said.

Wind energy detractors point to the high cost of turbines, their limited capacity to operate in high winds, and the uneven ability to store or transmit the power they generate. Critics say the subsidy makes the cost of a kilowatt hour of electricity produced by wind generation far more expensive than traditional fossil-fuel electricity generation.

But Blaney, from his vantage point in the small town of Morocco, sees it differently.

“Here’s what it means,” Blaney said. “Each wind tower provides the farmer from $5,000 to $10,000 and up per year.” Some landowners have as many as 27 turbines operating, and their footprint doesn’t remove much acreage from production. “In farming, when times are tough, that would mean the family farm.”

County governments will reap millions in property taxes, even after tax abatements, he said. Steelworkers in Lake County and ancillary businesses around the state benefit and create jobs, he said. “It provides employment in these rural counties, not a large number, but probably 30 to 40 employees in Benton County work in the wind industry.”

Blaney said his understanding is that the federal subsidy covers about 30 percent of the big up-front investment in wind power. That’s not unlike the government aid that other energy sources and infrastructure received at their inception, he said.

He hopes the winds shift again and conditions are favorable to further development of a clean, renewable source of energy. Lately, though, the only such work has been a few agreements with landowners to provide leases if future development occurs.

“I don’t believe the wind industry can be developed without the intervention of the federal government,” Blaney said.•