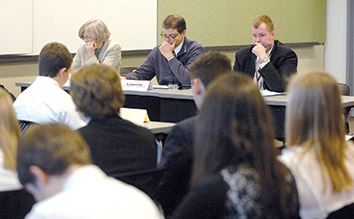 Without the We the People program, Adam Packer might be conjugating Latin verbs rather than serving as general counsel at the Indiana Gaming Commission.

He credits the civic education and competition program as well as an advanced writing class he took as a senior at Castle High School in Warrick County with sparking his interest in the law. The intellectual study of learning how the “ancient document” that is the U.S. Constitution remains relevant today appealed to him and continues to intrigue him.

“I think it opened law school to me,” Packer said. “Who knows what I would have become. I probably would be a Latin teacher. Cool but very different.”

The WTP program was introduced in 1987 to mark the bicentennial of the Constitution. A comprehensive curriculum aims to teach elementary, middle and high school students about democracy and civic responsibility while annual district, state and national competitions test students on their knowledge and analytical skills.

Although the program is not meant to be a pipeline to law school, Indiana attorneys who participated say it not only broadened their understanding of the Constitution but continues to shape their thinking today.

Packer volunteers with WTP, participating as a judge for the state competition. What he looks for among the students – ability to analyze the question, provide an answer, then back it up with current real life examples – is what he also wants from his staff attorneys.

Indiana is among the states with the largest participation rates in the WTP program with about 6,000 students from schools in all nine of the state’s Congressional districts entering competition. In addition, Hoosier teams regularly finish in the top 10 in the national high school competition.

The course material gives students a broad understanding of the Constitution and federal government by detailing the history and content of the document as well as exploring the reasoning and philosophy that shaped the Founding Fathers’ thinking and, by extension, our democracy today.

Lesson plans involve more than memorizing the Preamble to the U.S. Constitution. For example, middle school students study the powers granted to the judicial branch, while high school students spend time examining the growing power of the presidency.

Questions during the 2012 national competition had high school students discussing the views of Federalists and anti-Federalists, how modern technology affects the Fourth Amendment, and what additional rights should be incorporated into the Constitution.

Like Packer, attorney Scott Barnhart gains renewed insight as he coaches an Indianapolis high school team and as he judges the state competitions. Barnhart, founding partner of Keffer Gilley Barnhart LLP, practices a fair amount of Constitutional law, and working with the students and hearing their questions and responses often deepens his understanding of the founding principles.

He was a member of the 1997 Castle High School team that won state and traveled to Washington, D.C., to compete in the WTP nationals. The trip was, he said, the most memorable experience of his high school years.

Another WTP experience that made an impression was working with a local attorney to prepare for the competitions. Barnhart was already considering becoming a lawyer before enrolling in the program, but interacting with the attorney gave him a different perspective.

“It helped me to understand what exactly being a lawyer is all about,” he said. Specifically, the questions the attorney asked the students taught him how lawyers think.

Barnhart went on to graduate from the University of Toledo College of Law and began his career as a deputy attorney general for the Office of the Indiana Attorney General.

A key player in the WTP program is the Indiana Bar Foundation which organizes the state competition and helps with the district contests every year. The contest format mimics a congressional hearing with students demonstrating their knowledge and critical thinking skills before a panel of volunteer judges. Even for students who either do not win or do not compete at all, the program is touted as being very effective in creating model citizens who vote at higher rates than their peers.

Despite the success and enthusiasm, Charles Dunlap, executive director of the foundation, worries about the nonprofit’s ability to sustain the program. Federal funding stopped when Congress killed earmarks two years ago and with that, Indiana lost its $300,000 appropriation.

The cut immediately ended the annual week-long summer institute for teachers, where the IBF would invite 30 teachers from around the state to Bloomington, at no cost, to learn how to teach the WTP curriculum. Also, the IBF is no longer able to provide all or most of the funds needed to send the winning high school team to nationals.

For the 2012 state competition, Taft Law opened its Indianapolis office to host the third round for the top-three high school teams. That round was cancelled in 2011 because of federal funding cuts, but this year, Taft donated space and recruited judges so the high school competition could return to its original format.

In addition, for the past several years, Faegre Baker Daniels has held a dress rehearsal to help the winning high school team prepare for national competition.

“The kids love it. They look forward to it,” Dunlap said of the practice round. The students are excited about going to a law firm, meeting the attorneys, and picking their brains about the Constitution.

Kathryne Feary-Gardner, attorney at Scopelitis Garvin Light Hanson & Feary P.C., was a member of the Lawrence Central High School team that won the state competition in 2003.

The WTP program did not inspire her to go to law school – her father is an attorney and after some youthful resistance, she followed in his footsteps. Yet, the curriculum had a lasting impact, shaping her views of civics as well as how she sees her role in a democratic society. And, her appreciation of what she learned has grown over time.

“It has an impact, tangible and intangible,” Feary-Gardner said. “Students who participate don’t forget.”

She is a little cloudy on how her team fared at nationals but, like Barnhart, she does recall Washington, D.C., as being an exciting and overwhelming experience. The biggest impression the trip made on her was when she realized she was representing Indiana to other students from around the country, most of whom had never met a Hoosier.

Now that she is a practicing attorney, Feary-Gardner stays engaged with the WTP program by volunteering as a judge for the district competitions. She likes participating and interacting with the students. She also enjoys letting people know just what can happen when students study the Constitution.

“I have my state ring to this day,” she said. “Even if clumsily or inappropriately, I find a way to bring it up because it’s pretty cool.”•