Home » Round 2 for hunting and marriage amendments 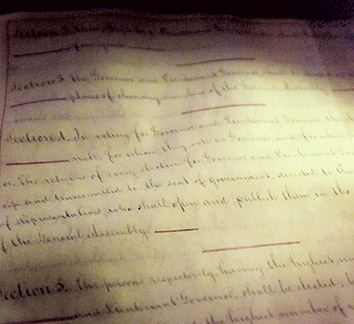 Although changing the Indiana Constitution is not easy, attempts to amend are common and the 2013 session of the Indiana General Assembly could see two proposed amendments come to the floor for a second vote. One amendment would protect Hoosiers’ right to hunt while the other would restrict their right to marry.

Constitutional attorneys are paying attention to the amendment to ban same-sex marriage, pointing out that limiting an individual’s rights, complicated by shifting attitudes and ambiguous language, make this provision fundamentally different from other amendments that have been made over the years to the Constitution of Indiana.

Both the “right to hunt” amendment, sponsored by Sen. Brent Steele, R-Bedford, and the same-sex marriage amendment, authored by Rep. Eric Turner, R-Cicero, passed the Legislature in the 2011 session. If either again passes the 2013 or 2014 session, it could go to the voters in November 2014.

The “right to hunt” amendment has been popping up in state legislatures across the country. Kentucky, Minnesota, North Dakota and Wisconsin are among the states that have added the provision to their constitutions. It is similar in spirit to most amendments in that it protects the right of an individual, here the right to hunt and fish.

On the other hand, the amendment banning same-sex marriage takes the unusual step of not only limiting the government’s powers but also restricting a person’s rights. Choosing whom to marry and form a family with is one of the most fundamental rights, said Deborah Widiss, associate professor at Indiana University Maurer School of Law.

“It’s pretty historic because generally speaking federal and state constitutions have been concerned with protecting individual rights from undue control,” she said.

Accompanying the ban on same-sex marriage are rapidly changing public attitudes. Three decades ago, society was not even contemplating marriage between two individuals of the same gender, but now states are voting for laws that allow same-sex partners to marry or form civil unions.

A societal shift like this has not been seen since the Civil War, said Paul Jefferson, partner at Barnes & Thornburg LLP.

“My point is simply, if we’re going to put into the constitution restrictions on rights … we just need to be really careful and deliberate about how this proceeds,” Jefferson said.

Amending the constitution in Indiana is more difficult than in other states. Hoosiers must go through a three-step process of having the amendment pass two consecutive General Assemblies then go to the voters for either approval or rejection.

“Most Hoosiers likely are proud of how infrequently we amend our constitution because it shows the institutions we have in place are doing a reasonably good job,” said Jon Laramore, partner at Faegre Baker Daniels LLP and former legal counsel to Govs. Frank O’Bannon and Joe Kernan.

A series of amendments adopted in 1970 made sweeping changes to the state’s judicial system. Most notably, the system of electing judges was switched to the current method of merit selection through a judicial nominating commission for the Indiana Supreme Court and the Indiana Court of Appeals.

The changes also expanded the Supreme Court to having no less than four and no more than eight associate justices in addition to the chief justice. The original language limited the bench to no more than five judges.

Also, the 1970 amendments brought the Court of Appeals into the constitution. Not included in the 1851 Indiana Constitution, the court was established by statute. The amendment mandated the General Assembly determine the geographic districts and locations for the court.

In 1996, victims of crime were afforded rights under the constitution. Language was included in Article 1 that gave victims the right to be treated with respect as well as to be informed and participate in the criminal justice process. This amendment was added as a reaction to the constitution outlining the rights of the accused but not mentioning the victims.

Subsequently, after the victims-rights amendment was ratified, the Legislature passed a series of statutes to define the ambiguous language of the amendment. The statutes included giving the victim the rights to make a statement for use in the presentence report, to be heard at any proceeding involving sentencing, and to information about the disposition of the criminal case.

Language in the amendment had to be loose, Laramore explained, because of differences between judiciaries. Counties have different court procedures which change over time. If the constitution was too specific, the amendment would quickly become outmoded.

Questions are already arising over the language in the proposed same-sex marriage amendment. As written, the proposal defines marriage as between one man and one woman. It then includes a second sentence which states that legal status “substantially similar” to marriage will not be valid or recognized.

More than 40 states have same-sex marriage amendments in their constitutions, but not all include that second sentence that goes beyond. Indiana’s is especially broad and could lead to litigation.

Laramore said the confusion comes in determining how many attributes of marriage would have to be present to conflict with the amendment. For example, if the state extended medical benefits to unmarried partners would that violate the constitution, or if the Legislature passed a statute giving unmarried cohabitants hospital visitation privileges would those violate the constitution?

Should the amendment become part of the constitution, Widiss said it could open the door for limiting other rights. Advocates of particular issues could point to the same-sex marriage language and remind the Legislature individual rights have already been constrained once.

Indiana already has passed a law banning same-sex marriage. However, in general, enshrining something in the constitution ensures that a future Legislature does not overturn or change the law, said Geoffrey Slaughter, partner at Taft Stettinius & Hollister LLP. The residents may trust their current legislators but they may not trust the officials elected in years to come to adhere to their wishes.

Indiana first penned a constitution in 1816 which coincided with the territory becoming a state and joining the union. After the state ran into financial troubles linked to investments in building canals and eventually went bankrupt, another constitutional convention was convened and the 1851 constitution was drafted. That is the constitution which stands today.

The Indiana Constitution is different from other state constitutions in that the Bill of Rights comes first. Even the opening words invoke Thomas Jefferson’s Declaration of Independence and underscore that individual rights spring from nature, not government.

Then the following articles establish elections along with the legislative, executive and judicial branches. Notably, the constitution begins and ends by giving the people the right to alter their government and amend their constitution.

“Framers of the Indiana Constitution had a very different understanding of what is important, what needed to come first,” Slaughter said.

Altering the constitution requires passing an amendment which, at its fastest, could take three to four years. Slaughter’s perspective is the constitution is not a fixed document and the bigger concern should be keeping citizens engaged.

“At the end of the day, all the silly ideas in the world aren’t going to undermine our system,” he said, “because our system really is only as good as the people who occupy the system.”•