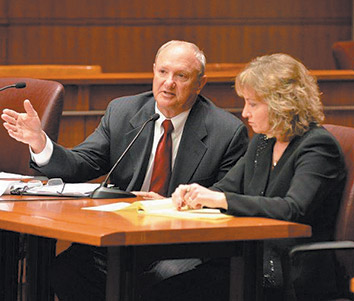 In a year when the Indiana General Assembly is working on a new state budget, the debate over whether to expand Medicaid is illustrative of how murky those dollars and cents figures can be.

Take a recent exchange between Sen. Luke Kenley, R-Noblesville, and Sen. Greg Taylor, D-Indianapolis. During a legislative panel at the Indiana University Robert H. McKinney School of Law, the senators, both members of the Senate Tax and Fiscal Policy Committee, disagreed over the cost of the expansion.

Kenley argued that, at present, Indiana’s Medicaid program costs $6.4 billion. The state pays $2 billion and the federal government is making up the remaining $4.4 billion.

Even absent an expansion of eligibility, Medicaid will cost the state $9.7 billion by 2015. While the federal government will pick up the tab for $2.3 billion of that additional cost, Indiana will have to come up with an additional billion.

With the state diverting more money into Medicaid, any discussion about increasing funding for education and roads will be off the table, he said.

“This one issue is going to drive the entire state budget,” Kenley said, “and it’s going to threaten the sovereignty of every state in the country unless we get some kind of massaging effect out of Washington to help us figure out how to deal with this.”

Taylor countered that the expansion will be covered by the federal government. The amount the state is paying now will be the amount the state will pay for the next three years even as Medicaid expands because Washington, D.C., will be funding the growth 100 percent.

“I don’t care where we start, the difference when we expand our Medicaid, any increase will be paid for by the federal government,” Taylor said. “That’s one of the most important pieces of the puzzle that we have not heard.”

The debate over whether to expand Medicaid was kicked off when the U.S. Supreme Court handed down its decision on health care reform.

Historically, the program, which provides health care coverage to low-income individuals, has been funded with state and federal dollars. The Patient Protection and Affordable Care Act somewhat alternated that formula by requiring all states to expand eligibility for their Medicaid programs to 133 percent of the federal poverty level. States that did not comply risked losing all their federal Medicaid dollars.

However, with National Federation of Independent Business v. Sibelius, 567 U.S. _ (2012), the Supreme Court equated that provision with putting a “gun to the head” of the states. It struck down that section and, in turn, that opened the door for states to decide on their own if they would grow their Medicaid programs.

Even as the Indiana General Assembly debates, Hoosier hospitals and health care providers have mostly made their decision. To fend off the cuts in Medicare, hospitals, through the Indiana Hospital Association, are asking the Legislature to expand Medicaid.

Providing more indigents with health care coverage would alleviate the burden of uncompensated care, said Brian Tabor, vice president of government relations at the Indiana Hospital Association. In 2011 alone, Indiana hospitals provided nearly $3 billion in medical care for which they did not receive any payment.

Hospitals and medical providers have already been hit with cuts in Medicare reimbursements since 2010. Over the next decade, Indiana hospitals are expected to see a reduction of $3.8 billion because of these cuts.

As part of the design of the ACA, the federal government cut Medicare, the health care program for seniors, to help pay for the expansion of Medicaid. The idea is that the Medicaid expansion will provide more individuals with coverage which will lower the amount of uncompensated care. In turn, hospitals will make up for the lower Medicare reimbursements by having more paying patients.

Nationally, the $155 billion in cuts to Medicare are expected to be offset by $170 billion in payments from the expanded Medicaid and health care exchanges covering the uninsured, according to Tabor.

“I think Indiana would be foolish to pass it up,” David Orentlicher, Samuel R. Rosen Professor of Law at the I.U. McKinney School of Law, said of the Medicaid expansion.

Under the ACA, the federal government will pick up the tab for the expansion at 100 percent for three years starting in 2014. It will gradually phase down to 90 percent reimbursement in 2020.

Orentlicher compared it to a free trial. The state could try the expansion for three years then decide whether to continue.

Without the expansion, some hospitals could close or shed services, Tabor said. Some of the 126,860 jobs in Indiana hospitals would be at risk as well.

Tabor also predicted the impact could trickle down into the larger community by forcing individuals to go outside their own neighborhood or town for medical care. In addition, it could hinder economic development since companies are unlikely to want to operate in a community that does not have a hospital which offers complete services, he said.

The expansion, in Kenley’s eyes, is about more than money.

“They are taking away our authority and our discretion to make certain types of decisions within the system,” Kenley said.

To get control back, he has asked Gov. Mike Pence to enlist as many other governors as possible and argue vociferously for block grants. Turn over the money, loosen the regulations and let the states develop a health care system that could perhaps cover more people and increase efficiency so costs are pushed down, he said.

Full expansion of Medicaid through 2020 would make coverage available to about 500,000 Indiana residents and cost the state $516 million more per year, according to a study by Milliman Inc. The estimate also includes the “woodwork effect” whereby those individuals who are already eligible for Medicaid under the current guidelines but have not enrolled would come into the program to comply with the ACA mandate that all individuals carry health insurance.

More difficult to determine are the potential savings realized by expanding Medicaid.

Along with reducing the instance of uncompensated care, Tabor pointed out by increasing coverage, less of those unpaid costs would be shifted to private insurance. In addition, the overall health of Indiana residents could improve because individuals would be able to afford care and no longer wait to seek treatment until the medical condition becomes acute.

On Jan. 16, Democrats in the Statehouse tried to jumpstart the push for implementation of the ACA by offering Senate Bill 540 which calls for the establishment of both the Medicaid expansion and health care exchanges. The bill is authored by Sen. Karen Tallian, D-Ogden Dunes.

In announcing the bill, the minority party addressed the issue of savings, noting the state could offset costs of the expansion and exchange by realizing reductions in medical funding in the Department of Correction and mental health initiatives.

Tallian is uncertain of the bill’s future. However, she recognizes the effort to get the Legislature to act will likely get some outside help. Businesses and hospitals, already dealing with ACA costs, will put pressure on the Statehouse to expand Medicaid.

“I think there are a certain number of states who did a sort of knee jerk reaction that ‘We don’t like Obamacare, we’re mad that it ever passed and we’re not going to play,’” Tallian said. “I think that will eventually go away.”•