Home » Lucas: Had a tough day? Escape to the movies!

At the top of every issue of Indiana Lawyer, we state that this newspaper is “Your Source for Statewide Legal News.” The staff of Indiana Lawyer works diligently to deliver news and information that you can use in your practice of law.

However, you know what they say about “all work and no play… .”

In that spirit, we are diverting from our regular news coverage to bring you advice that we hope will provide insights to planning your leisure time.

With this issue of IL, we begin presenting movie reviews by Indianapolis criminal defense lawyer Bob Hammerle. Bob is known to many lawyers and businesspeople for his passion about cinema and his colorful commentary about the latest shows to hit the theaters. After receiving several phone messages and emails from readers about Bob’s work and the enjoyment his regular movie reviews – delivered several times per week via email – brings to them, I knew this was something we had to check out. 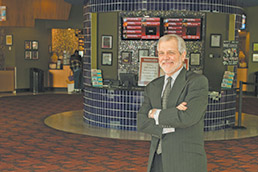 After being added to the movie review email list, I quickly noticed a couple of things. Bob’s taste in movies didn’t fit my preconceived (probably a bit stereotypical) notion of “what guys like.” His treatment of reviews seemed fair and balanced based on the product, not the type of movie he was seeing. I suppose that is probably the test of a good movie critic and a true aficionado. The number of movie reviews hitting my inbox also surprised me. How, I thought, does a busy lawyer have the time to see all these movies?

“I take it,” Bob told me when I, like others before me, asked him that question. “You have to have an interest other than what you do for a living.”

Find your bliss. You can’t argue with that.

Bob confessed that he has been cursed with a passion for movies since he fell in love with Hayley Mills as a kid. He enjoys all types of films – comedy, suspense and horror, historical and animated films – but oddly, he explains, a good romantic comedy is among his favorites.

“I love romantic movies where one of the people in love has to walk away in order to save them, like ‘Casablanca,’” he said. One of his favorite modern-day romantic comedies is “Silver Linings Playbook.”

Bob began reviewing movies while attending Marian College in the mid-1960s – he’d head to the movie theater when others went out for food – and they’d return to campus for Hammerle O’Rama. He ate the food friends brought back while reviewing the movie for them.

Today, he averages three or four movies per week, and a couple hundred people receive his “Hammerle Movie Review” emails.

“It’s a pity I can’t get the same satisfaction out of a house of worship that I get from a movie theater,” he said, “I’d be one of the world’s great holy men.”

We hope you enjoy reading Bob’s take on the movies and that it may even inspire you to take a well-deserved break and see a few. Consider the advice of one of my all-time favorite movie characters, Ferris Bueller. “Life moves pretty fast. If you don’t stop and look around once in a while, you could miss it.”

We’ve included a portion of Bob’s Oscar picks, as well as a sampling of his reviews, in this issue, and we’ll continue to bring you Hammerle’s hits and misses in the weeks ahead. For a complete listing of his Oscar picks and many more reviews, visit Bob’s website – www.bigmouthbobs.com.

Maybe I’ll see you at the movies!•