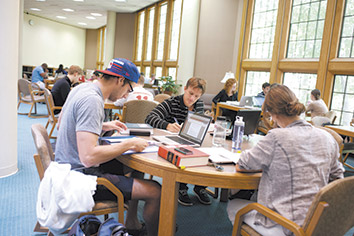 Like many of their educational colleagues across the country, Indiana law schools have been reviewing and rethinking the way they prepare their students for the legal profession.

The schools are trying to respond to not only the pummeling they have taken since the recession but also to changes in the workplace. Indiana law school deans maintain even before the economic downturn took hold, demand for lawyers was declining because the legal profession was undergoing a fundamental shift. Work that attorneys had once done was either outsourced to service providers or eliminated by technology advances.

Once the recession hit and so many lawyers were out of work and struggling to repay staggering student loan debt, law schools were heavily criticized for charging too much and doing too little to prepare their students.

in and out of the classroom, making their students better prepared for jobs in the legal field.

“I think it’s really important today to see the challenges to law schools and the challenges to the legal professional as a structural challenge,” said Hannah Buxbaum, interim dean of the Indiana University Maurer School of Law. “We all have a stake in educating the next generation of lawyers. (We have) to work on that challenge in a collaborative way and think about the training students get in law schools that ultimately connects them with the work they will do on the job in their initial years of employment.”

A jump in its ranking by U.S. News and World Report buffeted I.U. Maurer School of Law from the initial impact of the recession. The school climbed to 23 in 2009, up from 36, in the publication’s national ranking of law schools which boosted the number of students wanting to attend the Bloomington school.

Although that is significantly smaller than the two previous classes, it is still within the normal range for Maurer, Buxbaum said. Applications are still arriving, but she is expecting the class matriculating in 2013 will be small as well.

Even as classes were growing, Maurer was making adjustments in response to the economic realities. The school has been revamping its curriculum to provide more clinical experience and opportunities for externships for students.

“It’s clear that the legal profession is changing in significant ways, but I think it’s really important to understand as well as we can how it’s changing,” Buxbaum said. “We are trying to be careful about what the changes are as we try to react to them.”

The hands-on experience is not pushing out the traditional law school curriculum but rather is being integrated into it. Legal doctrine, problem solving, and critical- and analytical-thinking skills are still important and still being taught, Buxbaum said. Mixing in real-world experience enables the students to gain a deeper understanding of the law.

To give students more practical experience, Gary Roberts, dean of the Indiana University Robert H. McKinney School of Law, advocates bringing more practicing attorneys into the classroom to help teach. The decision of how to reorient the curriculum will be made by the faculty, he said, but changes could follow the national trend to providing more skills-based learning with externships and clinics.

“I’m a strong believer that we need to have a relationship with the practicing bar,” he said. Traditionally, law firms have left the task of education to the law schools, saying it’s not their responsibility. “I think the legal profession as a whole has to take some responsibility to help new members transition into the work force. Members of the bar are better at practical training than some law professors.”

The higher costs associated with experiential learning will be coming at a time when McKinney is seeing its revenues decline because its class sizes are shrinking.

Historically, the school has enrolled classes around 300 students, but the size of the class that entered in the fall of 2012 was 259 students. Pointing out the applicant pool has also shrunk, Roberts anticipates the class matriculating in 2013 will be smaller still, possibly 220.

The decline in the number of students could lead to a multimillion-dollar structural deficit in three years, Roberts said. However, the school has substantial reserves which, he added, will offset the shortfall.

Consequently, Roberts said, McKinney School of Law has the luxury to be very deliberate and thoughtful in how it adjusts to the smaller revenue stream. It will not need to take a meat ax to its programs.

Students who arrived at Valparaiso University Law School in the fall of 2012 were the first to be introduced to a new interactive mobile website which provides a step-by-step guide to career goals. The program, dubbed VOLT, gives students a checklist to follow from the first semester through graduation that will better position them for getting a job, school leaders say.

For the class starting in the fall of 2013, the school is launching a new curriculum. The faculty has “significantly revised” the course of study to teach the students as they learn today and give them the skills and expertise they will need, said Jay Conison, dean of the Valparaiso law school.

With more emphasis on problem solving, group work and hands-on learning, the new curriculum will be woven into the traditional classes.

“I think what we’re seeing now is different schools adapting to changes in different ways,” Conison said. “I think we’ll see law schools become more diverse in their educational approach and focus on core areas. It’s creating many more laboratories of experimentation which is a good thing.”

How many students will be part of the new curriculum is uncertain. Applications to Valparaiso had been holding steady, Conison said, until 2012. He could not pinpoint a single reason for the decline, and he is unsure at this point how the applicant pool for 2013 will measure up.

The University of Notre Dame Law School is looking for guidance from the marketplace as it reviews its curriculum. For example, with more employers demanding more help in intellectual property law, the private institution is ramping up resources in that area.

Also, more experiential learning programs are being added to provide the students with more hands-on experience. Notre Dame’s new Chicago program draws upon the alumni and employer connections to offer students a semester of classes and intensive externships in the Windy City.

“Our faculty Committee on Professional Formation is taking an in-depth look at our curriculum,” Nell Jessup Newton, dean of the Notre Dame law school, wrote in an email. “We have added more experiential learning opportunities such as our IP/Entrepreneurship clinic to help prepare students for particular markets and are also increasing externship opportunities for our students to gain hands-on skills.”

While the applicant pool has gotten smaller, Notre Dame has not had to significantly reduce its class size.

On the cusp of the downturn in 2008, Notre Dame received 3,300 applications to the law school. That number fell to 2,888 for the class entering in 2012. Still, class size has remained steady, Newton said, because the school limits each class to about 180 students.