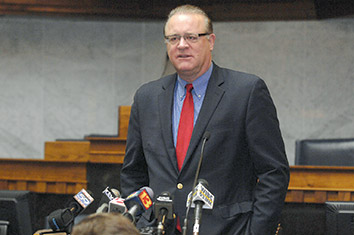 Indiana Senate President Pro Tem David Long admits his effort to convene a state-driven Constitutional Convention will be a struggle.

Other states could agree to participate then later decide to drop out. They could dismiss his proposal for a single-issue convention in favor of tackling a host of grievances. And they could snub his model legislation that would place restrictions on the behavior of the convention delegates.

However, the Fort Wayne Republican believes something has to be done to stop what he characterized as the federal government’s meddling and trampling of states’ rights.

“The founders gave us that ability,” Long said, in reference to Article V of the U.S. Constitution which gives states the power to hold a convention without congressional interference. “It’s tougher now than when there were only 13 states, yes I understand that, but they gave us that ability expecting us to utilize it as a key tool to limit federal overreach … .”

This session, Long has authored Senate Joint Resolution 18 which makes an application to Congress to call a Constitutional Convention. He has also introduced two companion measures, Senate bills 224 and 225, which outline how to appoint delegates and their duties.

The resolution and accompanying bills overwhelmingly gained approval in the Senate and have moved to the House of Representatives where all three pieces of legislation are sponsored by Speaker Brian Bosma, R-Indianapolis.

Indianapolis attorney Scott Chinn, partner at Faegre Baker Daniels LLP, also acknowledged the difficulty in getting 34 states to agree to a single-issue convention, but he did not dismiss the notion of making the effort.

“My opinion is this ought to be taken very seriously,” he said.

Under the provisions in Long’s resolution, the states would call upon Congress to establish a Constitutional Convention as directed by Article V of the Constitution. Most important, the gathering would draft an amendment that would only address putting limits on the commerce clause and federal taxing powers.

Long sees an amendment as the only way to restrain what he calls Washington’s inability to control spending.

“(The states) certainly have the right to defend themselves against the constant unfunded mandates that come down the line from the federal government in areas really where they have absolutely no business or rights but, again, because they have the purse strings, they’re able to literally get the states to do what they want,” Long said.

Sen. John Broden, D-South Bend, was among a small coalition of mostly Democrats voting against Long’s convention resolution and bills.

He cannot envision states signing on to convene a convention under such narrow terms and, therefore, getting the necessary two-thirds will be difficult. Moreover, he believes the one-and-a-half hours devoted to debating Long’s proposals would have been better spent addressing other matters.

“I have faith in our Supreme Court in delineating these matters,” Broden said. “I don’t always agree with every Supreme Court ruling but I prefer the way things are being adjudicated through the courts.”

Still, Long is adamant about making the attempt. He crafted the two companion bills as a model for other states to follow to ensure the convention delegates stick to their appointed duties and to prevent the gathering from becoming a runaway convention.

SB 225 details who is eligible to be an Indiana delegate and alternate to the Constitutional Convention and how the General Assembly would make the appointments.

The duties of the delegates and alternates are spelled out in SB 224. Provisions include voiding votes cast outside the scope of instructions given by the Indiana Legislature and recalling delegates who do vote or even attempt to vote outside the instructions. In addition, delegates knowingly or intentionally casting such a vote could be charged with a Class D felony.

Left to the delegates and alternates at the convention would be the specific language in any amendment. While his resolution states any proposed constitutional amendment could only deal with limiting commerce and taxing power, Long has not offered any model or advisories on how it should read.

In response to those who say the convention could not be controlled, Long asserted they have not read the bills and are not paying attention to the language.

“That’s the problem. The critics are there without an alternative, and I say under these circumstances what are we afraid of?” Long said. “I mean the path that we are going down today is one of uncontrolled spending by the federal government that isn’t doing anything to contain itself. It’s threatening, I think, the future of this nation and for our kids, I think, the debt that they’re being forced to absorb is crushing.”

As an example of the overreach, Long pointed to the federal government withholding highway transportation dollars because Indiana had not made “some small move” on its drunken driving laws. States should be able to decide how they want to write, for instance, drunken driving and seatbelt laws, he said, but the federal government cuts payments if the laws do not meet its standards.

“It’s getting to the point where it’s just one government – the federal government – and we’re just acting at their will,” Long said.

To Geoffrey Slaughter, partner at Taft Stettinius & Hollister LLP, the Senate president’s example of how transportation money is used is not governed by the taxing power or commerce clause, but rather by Congress’s spending power.

In 1987, the Supreme Court addressed this very issue in South Dakota v. Dole, Secretary of Transportation, 86-260. The federal government was holding back funds because South Dakota would not increase its drinking age from 19 to 21.

The majority of the court characterized the withholding of funds as a “relatively mild encouragement” and concluded that is a “valid use of the spending power.”

Slaughter noted spending power could be addressed in the amendment through limiting the taxing powers.

Although the consensus of Long’s attorneys is that the spending aspect is included in the taxing authority, Long said the verbiage in the bills could be amended to specifically cover spending.

Long’s argument for states’ rights centers around what Chinn called the “great question” of every century of how much deference the federal government should give to the states. Pushing a resolution for establishing a convention provides a framework for a constructive conversation about the role of the federal government in state affairs.

“I think Indiana has often been a state concerned with asserting its own sovereignty status and not just yielding to the federal government and federal legislation,” Chinn said.

Broden sees the resolution and Senate bills as evidence of a heightened frustration fueled by the re-election of President Barack Obama. This is also the first legislative session since the Supreme Court upheld the Patient Protection and Affordable Care Act. These events seemed to have increased the tension about the perceived overreach of the federal government.

During Obama’s first term, Broden said, concerns about spending were typically just complaining. Now, the anger has risen to the level of legislation being introduced and passed.

“My sense is,” he added, “this is a different level of intensity.”•