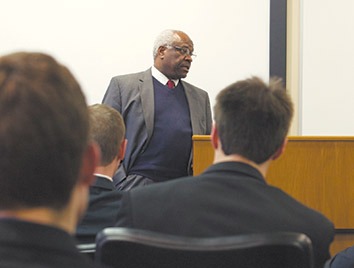 U.S. Supreme Court Associate Justice Clarence Thomas visited the Notre Dame Law School March 5 and 6 as the Judge James J. Clynes Jr. Visiting Chair. During his visit, Thomas spoke with students enrolled in Law in Education, Constitutional Law and Federal Criminal Law classes. He also met with student groups, underclassman and attended Mass. On March 6, professor Nicole Stelle Garnett, who clerked for the justice from 1998-1999, held a conversation with Thomas. They touched upon his childhood influences, his respect for fellow Supreme Court justices, his expectations of clerks, and encouraged the law students to stay diligent in their commitment to the law. Thomas is a 1974 graduate of Yale Law School and became a judge in the U.S. Court of Appeals for the District of Columbia Circuit in 1990. After being nominated for the Supreme Court by President George H.W. Bush, Thomas was sworn in as an associate justice in October 1991.