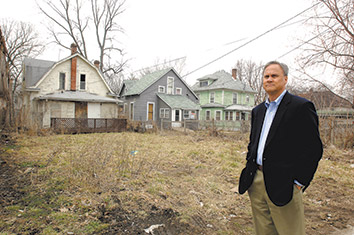 State Sen. Jim Merritt wanted to help an eastside Indianapolis church gain possession of some long-abandoned, derelict houses, tear them down and establish a neighborhood park.

But it turned out there wasn’t much the law allowed the church to do. When Merritt started investigating, he found few avenues existed for neighbors to proactively improve neighborhoods beset by the intractable problems presented by abandoned and neglected properties.

“No one really knew what to do,” said Merritt, R-Indianapolis.

That situation gave rise to Merritt’s Senate Bill 433, one of five proposals introduced in the General Assembly this session to address abandoned property. Merritt’s bill is the only one to advance, though, as bills on the topic from both chambers took a variety of approaches.

Merritt’s bill would give counties tools to transfer properties that have languished through tax sales without a buyer to neighbors, nonprofit organization or others who show a capacity for repairing or maintaining a property.

“It really gives tools to communities that have homes that are not wanted,” Merritt said. “We’re just trying to make sure they can do this in a quality way.”

Marion County has an estimated 8,000 to 10,000 vacant houses, Merritt said, and abandoned property is a drain statewide. “I think all 92 counties have situations where this piece of legislation will come into effect and will help,” he said.

Rep. Vernon Smith, D-Gary, has firsthand experience with the difficulties of eyesore properties. Smith is chairman of the nonprofit African American Achievers Inc., which owns the Glen Theater. Volunteers have repeatedly had to tend to an adjacent property that continually is neglected and overgrown with weeds.

Seeing a larger problem, Smith put forth House Bill 1183. Among its provisions, a person who maintains, repairs or cleans up a neighboring abandoned structure after providing notice to the owner may place a lien on the property for the fair market value of the work not exceeding $10,000.

“What happens in a place like Gary is the city doesn’t (maintain properties), a lack of attention is given to properties adjoining yours, and it takes away from the value of your building,” Smith said. “If you’re trying to take care of your property, it kind of hurts to have something next to you that’s abandoned or neglected.”

Smith’s bill never had a committee hearing, but neither did other bills dealing with abandoned properties. One stalled measure would have allowed units of government to extinguish mortgage liens on certain abandoned property. Another would have created a state lending program for the purchase and renovation of abandoned residences.

Those proposals represent acknowledgement of a problem that Smith believes should lead to the Legislature using a study committee to look into how to deal with abandoned property. “I think we ought to be about the business of looking for answers, and I don’t think we are,” he said.

Eugene Lausch is an informally retired attorney with more than 40 years of experience with the city of Indianapolis. He helped draft code-enforcement statutes in the 1970s when, at the dawn of Unigov, he headed the Division of Code Enforcement in the Department of Metropolitan Development.

“There’s always been this healthy tension between coming up with innovative, cutting-edge ways of dealing with this problem and balancing that against the constitutional constraints on the range of action that can be taken by government,” Lausch said. He said there’s tension, too, between those who argue for demolition of abandoned homes and those who urge preservation of housing stock.

Business also has a stake in how far lawmakers go. Attorney Tom Havens is government affairs director for the Indiana Builders Association, which supports Merritt’s bill. He said the IBA looks at proposals that extend the reach of government into private property on a case-by-case basis.

“The biggest thing we’re concerned about is that the free market still has a chance to purchase these properties first,” Havens said. Merritt’s bill would do that by establishing a public hearing process as a requirement of transferring property.

“Whatever we can do to make areas better is good for us, good for everybody, I think,” Havens said. “The more people you can get involved in this conversation, the better.”

Merritt said there are other proposals he’d like to consider, such as shortening the redemption period in which an owner can reclaim property after a tax sale. Currently, a property owner has a year to pay off a tax sale lien, but Merritt thinks perhaps six months is sufficient.

“I think there are limits on what the best state law can do in this area,” Lausch said. “You can make the argument that abandoned buildings are signs of an unhealthy community, and that there are a range of things communities can be doing and should be doing to make communities healthy, and when that happens, you won’t have an abandoned building problem. It is a real, and difficult, problem.”•