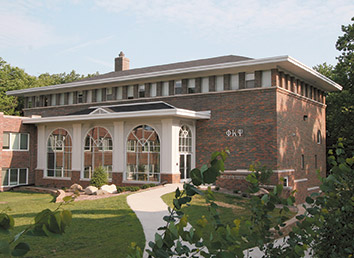 A former freshman pledge hurt as fraternity brothers at Wabash College carried and then dropped him will have his case heard by the Indiana Supreme Court, testing the reach of Indiana’s anti-hazing statute.

But before the court determines whether colleges, their Greek letter chapters or other entities may be liable for allegations of hazing under the law, the jus

tices will wrestle with whether Brian Yost was hazed at all. Two of three Court of Appeals judges held that he wasn’t and that his injury was a result of spontaneous hijinks that got out of hand at Wabash’s Phi Kappa Psi house.

Judge Nancy Vaidik dissented, concluding that the facts could lead to a finding that Yost was hazed. “Because of this, I believe that this is a jury’s call, not ours,” Vaidik wrote, though she agreed with summary judgment for the national Phi Kappa Psi fraternity.

As a freshman pledge, Yost was injured when four upperclassmen tried to carry him to the shower in the fraternity house and run water on him in an activity called “showering,” which was outlined in the Gamma Chapter’s pledge packet. Upperclassman Nathan Cravens put Yost in a chokehold, according to the court record. Yost became unconscious and was dropped on the floor, resulting in injuries. He subsequently withdrew from Wabash.

In her dissent, Vaidik cited two later student deaths at Wabash that she wrote, “support a showing of a culture of hazing that is present on Wabash’s campus.”

Majority Judges Terry Crone and Cale Bradford took exception. “While the dissent notes that both incidents happened after Yost’s showering, we fail to see how such subsequent developments are relevant to our concerns in this case.”

The judges also disagreed over whether Wabash turned a blind eye to hazing.

Wabash spokesman Jim Amidon said the college would not comment on pending litigation, but said in a statement that the Crawfordsville school makes clear its position on student conduct. “Wabash operates with a single rule of conduct known as the Gentleman’s Rule, which states: ‘The student is expected to conduct himself at all times, both on and off the campus, as a gentleman and responsible citizen.’”

“The high expectations we have for, and communicate to, our students are emphasized often. That said, ours is a place of education, and we constantly seek to improve the education of our men to a higher understanding of the Gentleman’s Rule and of their capabilities. Accordingly, most of our discipline is done in conversation and from an educational perspective and not, most often, from a punitive one,” the Wabash statement said.

Stephen M. Wagner, a partner with Wagner Reese LLP in Carmel, sued Wabash and a local and national fraternity over the 2008 death of freshman Johnny D. Smith of Tucson, Ariz. Smith died of alcohol poisoning at the Delta Tau Delta house at Wabash. A trial court granted summary judgment in favor of the national fraternity, and that ruling has been briefed to the Court of Appeals, Wagner said. The trial court has not yet ruled regarding Wabash and the local chapter. He said he could not comment on the Smith case.

But Wagner said Yost will be closely watched for whether justices limit their holdings to the facts of the case or reach broader liability issues.

“A key fact in Yost is that Wabash was not just the college in that scenario, but also a landlord and a premises owner,” Wagner said. That differs from universities such as Indiana or Purdue, where fraternity houses are independently owned. But Wagner believes Yost could be significant to the duties of colleges to protect students in college-owned dorms, for instance.

As reflected in the COA opinion in Yost, the definition of hazing is “a polarizing issue,” Wagner said. So is the notion of a hazing culture at Wabash. “There’s a perception about what goes on at one of the few all-male, almost all-Greek colleges,” he said. “In some of these lawsuits against Wabash, there are allegations that there’s a pattern of allowing underage drinking and allowing these kinds of activities to occur in college-owned houses.”

Tidmarsh said both the majority and dissent in the Court of Appeals ruling made strong cases, particularly as to what constitutes hazing. Of the hazing statute, he said, “there’s enough language in there that there’s play about whether it could encompass this kind of activity” that resulted in Yost’s injuries.

Indiana Code 35-42-2-2 defines hazing as forcing a person, with or without consent, and “as a condition of association with a group or organization … to perform an act that creates a substantial risk of bodily injury.” Whether this statute that sets criminal penalties for hazing also may impose civil liability through a duty claim is another question for the court.

“Duty tends to arise when there’s some pre-existing relationship to the people who are doing the injuring and the defendant, or when it’s foreseeable an injury will arise and you don’t do anything about it,” Tidmarsh said. “Usually foreseeability alone isn’t going to be enough.”

Sean Callan is a founding partner of Cincinnati-based Fraternal Law Partners. The firm represents Greek letter organizations, their chapters and foundations. He said every national Greek organization prohibits hazing, and the Yost decision was refreshing because it disposed of the complaint against the national Phi Kappa Psi fraternity.

“I think the community’s efforts to eliminate hazing are laudable and effective. However, the plaintiff’s bar has consistently tried to use these anti-hazing efforts as the linchpin to an argument that by enacting these very same anti-hazing efforts, the national organization has somehow become a guarantor of every individual’s well-being. That is not reasonable or fair,” Callan said.

But Wagner said national organizations do exert control and authority over their chapters. He noted the Delta Tau Delta charter at Wabash was revoked after Smith’s death.

The Yost case, Callan said, is likely to turn on Indiana’s definition of hazing. Unlike most of the 44 states with such statutes, Callan reads Indiana’s law to be predicated on activity forced on a victim as a condition of membership.

“Based upon this statutory definition, and the developed facts, the showering activity was simply not imposed as a condition of membership,” Callan said.

Attorneys for Yost, Wabash and the Indianapolis-based Phi Kappa Psi fraternity declined to comment, saying it would be inappropriate because of the pending Supreme Court arguments.•