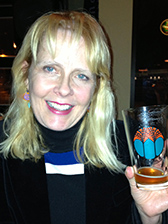 She is a graduate of Indiana University and the Chicago-Kent College of Law. She has served as a Deputy Public Defender at the Indiana State Public Defender’s Office, the Principal Clerk of the Indiana House of Representatives, and a Donor Relations Officer at Indiana Landmarks. She is Lee Smith, and she has been served with interrogatories.

Q What is the Brewers of Indiana Guild?

A The Guild is the trade association for all of Indiana’s professional craft breweries, 61 at the moment but the ranks are growing an average of one new brewery per month.

Q In your former life, your clients were criminal defendants. Now your only client is Indiana craft beer. For which is it more fun to advocate?

A Well, of course the brewers are more fun, especially since I don’t have to be frisked prior to visits with this client! Our meetings often include sitting down with a pint of beer (a very civilized way to conduct business, by the way!). But you’re right to recognize that both of these career turns include advocacy. I love the job I have now, but I’m also proud of the work I did as a Deputy Public Defender.

Q What is the most interesting or unique Indiana craft beer you’ve tried?

A Our brewers are very creative, so “most unique” changes all the time. One beer that comes to mind is Rob Caputo’s Cucumber Kolsch. Rob is the head brewer at Flat 12 Bierwerks. It didn’t sound like something I’d like, but it was refreshingly light with just a hint of cucumber, and quite delicious! I took the Kolsch to the Great American Beer Festival last October and people were absolutely crazy for it.

Q The Guild sponsors several very popular beer festivals each year. What goes into making those events so successful? Are there any plans to add annual events?

A We produce three annual festivals with a total attendance of around 10,000. Winterfest and the Indiana Microbrewers Festival are in Indy, and our newest fest is in Bloomington. The next festival is the Third Annual Bloomington Craft Beer Festival in April (a great fest in an amazing venue: the historic Woolery Mill). There are two reasons our festivals have gained such a loyal following: the brewers and the volunteers. The brewers are kind of rock stars among the faithful, and festivals are the primary opportunity for brewers and beer enthusiasts to interact (and the brewers enjoy it just as much as the guests). Our festivals are largely managed by a group of volunteers called Hoosier Beer Geek. These people are amazing in their dedication and professionalism. The Guild is still basically a grass-roots organization and we couldn’t do the festivals without HBG.

Q I can’t ask you to pick a favorite from among Guild members, so what is your favorite commercial beer?

A Well, if I picked one of the big “fizzy” beers I’d get laughed out of the Guild. Truth be told, I’m not sure I’ll ever again enjoy a Bud Light. If I can’t get craft, I’ll order the closest thing which usually ends up being a Heineken.

Q You have two children who are at or nearing drinking age. What has been your approach to teach them about alcohol and how it should be used responsibly?

A We’ve tried to demystify alcohol in our household. My husband and I are not big drinkers, but we certainly have alcohol in the home. When our oldest went to college (he is now 23) my husband and I were impressed that the kids seem to be more responsible about driving than we were at that age. Our younger son is 17 and we’ve talked about being responsible, not only for his own behavior but also in watching out for his friends. Incidentally, craft beer is not really what underage drinkers are after. For one thing, it is expensive. And the taste is better suited to a more mature palate. You just don’t hear about kids chugging $7 pints of beer.

A In some ways my job with the Guild is similar to my days as Principal Clerk of the Indiana House of Representatives. Technically, I report directly to the Guild President, as I reported directly to the Speaker at the State House. But I have a broad constituency of owners and brewers with specific needs and objectives, just like my “100 bosses” at the House of Representatives. I learn a lot just by listening to my brewers and visiting them in their environment. As for advice, I’d tell lawyers considering a change to follow their hearts. A law degree should not constrain one’s choices. Instead, it should open doors. I know lawyers who have jumped tracks into education, NFP management, social services, lobbying and even brewing (of course!—who but lawyers would call their brewpub Black Acre?). I’ve never heard anyone express regret over time spent in the practice of law or a law school education.

Q How much more likely to have a beard are brewers compared with the general population?

A Someone should do a study on that! Wonder if there’s grant money… Off the top of my head, I’d guess the incidence of beards on brewers is second only to orthodox rabbis.

Q Can or bottle?

A Hot topic right now! Bottles are still way more common than cans for crafts, but can proponents (like Sun King, Great Crescent and newcomer Tin Man) are passionate about cans and say it keeps beer fresher.•